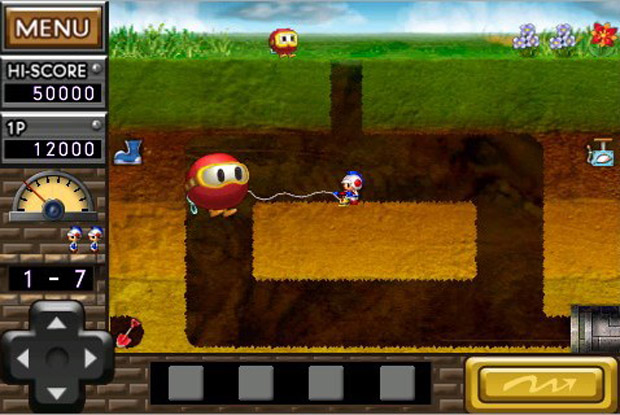 As far as my favorite games go, my top list is filled with snooty old games, classic RPGs, and some rhythm game nonsense. But Dig Dug also makes the list. I don’t know what it is about this 1980’s classic, but I’ve always loved it. Aside from Zuma, Dig Dug is probably the most played game on my Xbox 360…and that’s with the dog sh*t directional pad!

Now I can just use my finger to play in Dig Dug REMIX, just released for the iPhone and iPod Touch. It contains both the original title and a new version that has new power-ups and boss battles. That’s 256 original levels, and 35 new ones with five bosses, all for $5.99 now on the iTunes App Store. But wait, there’s more!

Both versions have two control methods: d-pad and flick, with the latter letting you dig in the dirt by flicking your finger on the screen. A new enhanced shovel lets you dig faster, and a new protective balloon blocks falling rocks.

My initial reaction to these new additions has me wanting to kick off one of those old man ‘up hill both ways’ stories, but I’ll save that for our review, coming soon.