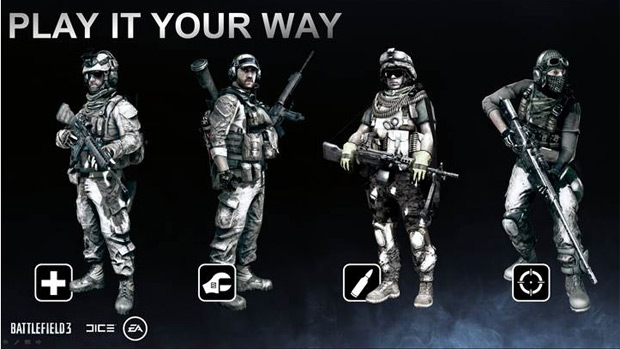 The Battlefield Blog has detailed the four classes that will be in Battlefield 3 — Assault, Engineer, Support, and Recon — and there have been a bunch of changes to the old formula.

First and foremost, there is no Medic class. The Assault class now has medkits and defibrillator abilities to give the person on the frontline the ability to revive your fallen brothers in arms. Engineers will repair vehicles, take them down with RPGs, destroy cover, and wield Carbines so they can actually shoot down some enemies as well.

The Recon class is the sniper class, but DICE’s Senior Multiplayer Designer Alan Kertz says that the Recon won’t just be a sniper but will have “several completely new teamplay oriented gadgets” to make the Recon more of a team player. Gadgets that will be revealed “a bit further down the road.” Drones and combat air support perhaps?

The Support class arguably has the most interesting new tools at hand, as it doesn’t just wield an LMG but now has access to Bipods and Suppressive Fire. The Bipod provides increased stability and recoil reduction, and can be deployed anywhere on the field by going prone and zooming in with your LMG, or by standing or kneeling in front of “suitable supports” such as a window sill.

All classes can be customized according to your preferred play style, so you can create a medic-heavy Assault class if you really miss being a Medic.

Battleblog #2: With A Bit Of Class [Battlefield Blog via Rock, Paper, Shotgun]