Another day, another bout of controversy for Activision Blizzard — This time around, the subject is the publisher’s free-to-play mobile title Diablo Immortal, which is now seemingly in the sights of a possible class-action lawsuit due to one of its microtransaction-based gemstones.

According to a report by Polygon, Washington D.C. law firm Migliaccio & Rathod LLP is considering filing suit against Activision Blizzard over Diablo Immortal‘s Legendary gem “Blessing of the Worthy”, which the firm claims is actually detrimental to the player, rather than a boon, and therefore constitutes a degree of false advertising on the game’s behalf.

According to the firm, “Blessing of the Worthy” was advertised as offering players a 20% chance of doing damage equal to 12% of the player’s total life. But players have been finding that, once the gem hits Level 3, then the gem changes its status, having a 20% chance of damage equal to 12% of a player’s current life. Therefore, if a player is low on life, then the gem is borderline pointless. As this gem is sold as part of Diablo Immortal‘s DLC bundles, players have argued that they have paid money for something that does not, in fact, perform its advertised role.

Sometimes, I stop, lean back, and think about the words I’ve just written. This is one of those times. 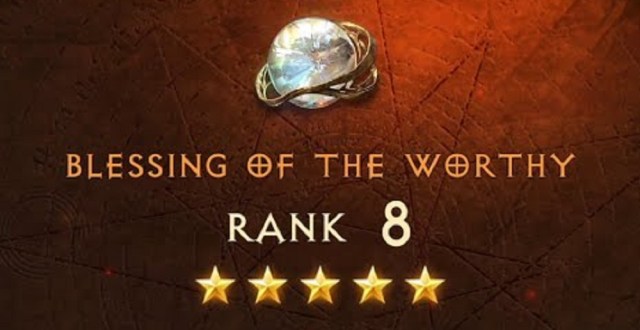 “Rather than offer refunds or some form of compensation, Blizzard has instead responded to the Blizzard community by stating that they will change the item’s text description to reflect its actual effect, at level three,” reads a statement from the law firm. “This practice essentially amounts to a bait-and-switch, since a purchasable item was advertised with one effect that players wanted and ended up with something completely different.”

At the foot of its statement, the firm thanks the Communication Workers of America (CWA) for bringing the matter to its attention. The CWA is, of course, the group responsible for leading unionization calls with Activision Blizzard subsidiary studios such as Raven Software and Blizzard Albany.