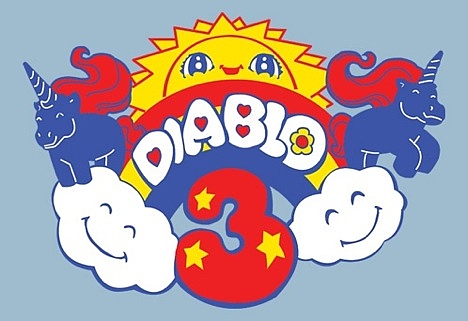 Earlier this month we shared a couple of curious screenshots with you from Blizzard’s Diablo III. Instead of prominently featuring a Barbarian with bloodied mace amidst a crowd of skeletons, the screens revealed a brighter side of the game. One showed a unicorn spraying a crowd of enemies with a stream of rainbow colored poo. The other, well, had a marshmallow barbarian poised to strike.

The screens were nothing more than a tease — a shot at the Diablo ultra-fans who have been clamoring for a grittier Diablo III since noticing that the game would have foreign colors like green or blue.

The image of that unicorn and his poo rainbow resonated with me on a level that I don’t want to make public. It must have hit the guys over at NerdyShirts pretty hard, too. They now carry the abominable shirt commemorating the epic mocking of hardcore Diablo fans with the aforementioned unicorn. The tee is bright, tasteful and colorful — everything that a Diablo zealot hates.

[Update: Oh, Internet. I originally thought that this shirt was created to commemorate a fake (yet tasteful) screenshot of Diablo III featuring a unicorn crapping a rainbow. I’m afraid that this isn’t the case.

Apparently, this is a recreation of a t-shirt Blizzard employees wore to BlizzCon 2008. You know, to piss off the “Hey, this game has to be dark or I’ll do something mean … like sign an Internet petition!” crowd.

Well played, Blizzard. Thanks for your comments guys, and a very special thanks goes to Rob. He e-mailed me a hot link so I could get my facts straight.]

If you find yourself digging this shirt or any hilarious apparel over at NerdyShirts feel free to use the promo code “DestructoidNerd” for a 20% off coupon. Careful though, it’s only valid for six more days.