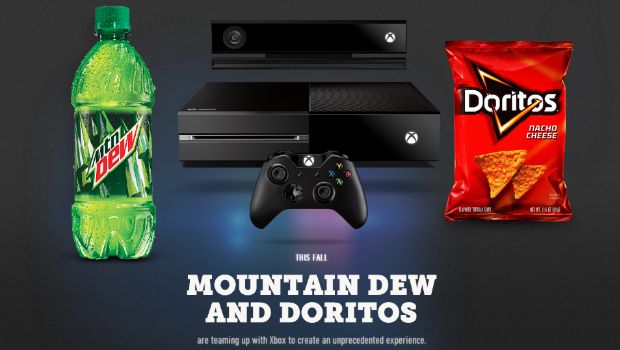 In what is either the most hilarious or most disgusting move ever, a new website called Dew & Doritos has opened to co-promote snack foods and Microsoft. Yes, the long-running partnership between the Xbox brand and Doritos is in full effect for the Xbox One.

Promising an upcoming “unprecedented experience,” the brains behind Mountain Dew and Doritos have “the next level of play” planned for this fall. Apparently this is the biggest promotion the quasi-food company has ever had. Even Doritos Pope must be impressed!

It’s nice to see that, despite what we think, the Xbox One absolutely looks after its customers — its customers being billion dollar corporations that will benefit immensely from one of the most company-friendly systems ever created, while consumers scrabble in the dirt like maligned paupers. It seems the Xbox One wants to shove food in our mouth while it crams its dick up our ass. Efficient!

Business as usual then. Look forward to buying a system with a subscribed online service that also shoves advertising for Doritos into your face. Because Microsoft needs money that badly! Crony capitalism has never tasted so cheesy!