It was a surprise, it has its own theme already, and it had gameplay

Every year for the past nine years or so, I’ve either covered or sat in every press conference at E3. I’ve seen major mind-blowing reveals, flubbed stage demos, and witness broken dreams. But in recent years E3 has winded down a bit. A lot of the big-time announcements are either leaked, announced ahead of time, or saved for a “Direct” style presentation where the publisher can entirely control the narrative in a sterile environment.

Very few things wowed me this year, but Devil May Cry 5, a game that I’ve been waiting a decade for, definitely did. 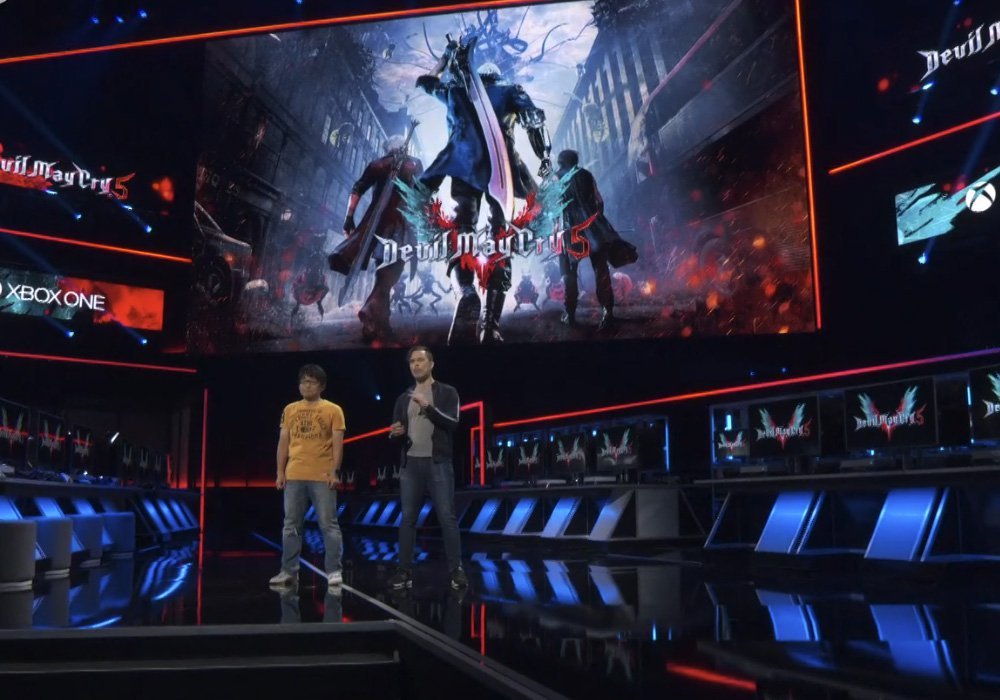 We had an inkling that Devil May Cry 5 might show up after a domain was registered under its name, but it wasn’t officially confirmed with any hard evidence like screens or leaked trailers.

No, instead we got an explosive announcement during Microsoft’s press conference, complete with a walk-on visit from director Hideaki Itsuno (the dev that has helmed the series since 2, and worked on the best title in the franchise, 3), who gave a heartfelt speech on how they’ve been waiting for this moment for a long while.

Itsuno also painstakingly shared vague updates for years that “something” was in the works even though he obviously couldn’t spoil Capcom’s marketing plan. His passion for the series was palpable on-stage and it really helped spark the entire reveal during what was arguably the best show of the week — Microsoft.

Ever since I found out that the Devil May Cry 5 theme “Devil Trigger” was a thing I’ve been listening to it.

If you’ve never played it the Devil May Cry series oozes style, and a lot of that is due to the meticulous influence of enigmatic producers/directors like Itsuno and Hideki Kamiya. There’s a whole world to explore amid the hack and slash action, and the DMC series is built upon the concept of replaying them over and over until you start to notice little nuances here and there.

Me getting my copy of Devil May Cry 5 on launch day. pic.twitter.com/z5hQP9j0fN

Over a decade ago when Devil May Cry 4 got its first gameplay trailer, I saved it as a .mov file on my old ass PC and watched it constantly. Viewing it on YouTube in HD is considerably easier, and I’ve peeped it multiple times, picking it apart for little hints here and there.

Which leads me to my next point — Capcom and the folks that crafted the trailer did a fine ass job. The reveal balances stylistic cinematic action and actual gameplay, which is always nice to see in a sea of CG-heavy reveals. Oh, and that gameplay didn’t approach snooze-fest levels of upward of 10 minutes, unlike several other shows.

It’s also 60FPS, will see a simultaneous release on PC, PS4, and Xbox One, and we even got a release window — spring 2019. With the confirmation of three playable characters, a list that includes Dante for sure, it pretty much guarantees that people will find a style they like, and all sorts of crazy combo videos (combo tech within the community is one of my favorite aspects of DMC) will be popping up shortly after.

On paper everything sounds good. I’m not completely sold yet as Capcom has been sitting on the series for a while, but right now my only real objection is Nero’s new look — which in the grand scheme of things means nothing in a hardcore action game.

Feel free to disagree as loudly as you want below and share your “game of the show!” My honorable mentions: Resident Evil 2 remake, Smash Ultimate, and Sekiro.