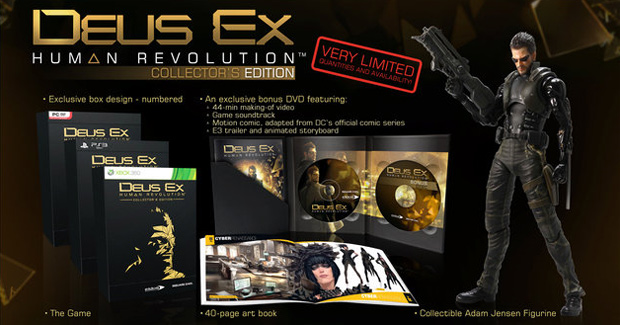 Aw yeah, a special Collector’s Edition for “select European countries,” New Zealand and Australia! Nope, this edition of Deus Ex: Human Revolution is not coming to the U.S., Canada, or anywhere else. While some of the stuff is also included in the Augmented Edition, here is what you’re missing out on with this supposedly “very limited” C.E.:

Adam Jensen action figure! The C.E. is 100 euro at Amazon.de, which will probably amount to around 70-80 GBP or something for the UK. Kind of pricey, but the Augmented Edition has an MSRP of 70 euro, so you basically pay 30-ish euro extra for an action figure and all of the DLC. You can keep your eye on this page to see what retailers in Europe will be selling it.