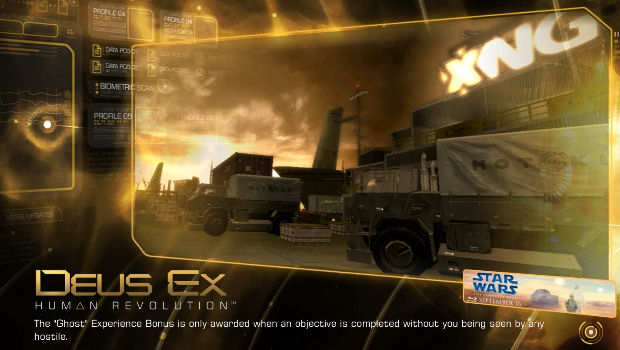 [Update: I’ve been informed that the ads weren’t “patched in” via any new update. The functionality was always there and it just seems that it’s recently started throwing the ads out there.]

In a move that can be filed under “Kind Of Sleazy,” a new update for Deus Ex: Human Revolution has snuck in commercials for the upcoming Star Wars Blu-ray release. Loading screens now promote Lucas’ latest attempt to ruin his life’s work, which is charming.

Seriously, I think it’s a little rich to sneak ads into a $50 product, especially when fans are still waiting for an update that actually fixes problems with said product. Smuggling the adverts into a game once money’s changed hands is pretty damn tacky, to say the least.

With dynamic in-game billboards and a proven ability to pop ads into loading screens, this is something that looks set to continue. That must be why Eidos Montreal told us all to play the PC version. That’s where the Benjamins are!