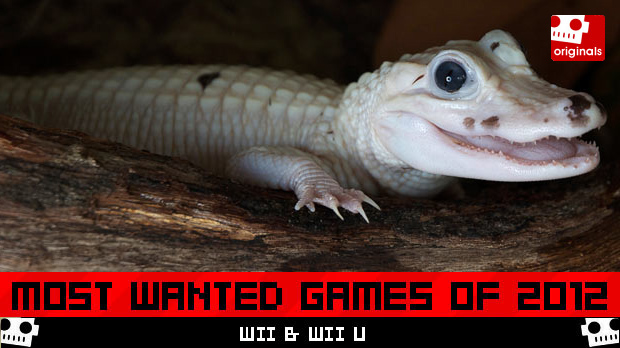 There were a few excellent third-party releases on the Wii in 2011 (Bit.Trip Complete immediately comes to mind), but for the most part, last year marked the end of an era for the console. The Wii didn’t even get the new Sonic game! When Sonic won’t even slum it on your console, you know that it’s over.

Still, thanks to a strong first-party lineup, the little white object of hardcore hatred had a pretty great year. There was a small but incredibly high quality library of releases, including The Legend of Zelda: Skyward Sword, Kirby’s Return to Dreamland, and (in Europe) Xenoblade Chronicles.

Surprisingly, 2012 is looking just as good for the Wii. Depending on your tastes, some may say this year will be even better than 2011 (which isn’t saying a lot, but bear with me). Destructoid has been ticking off all our anticipated titles for the coming year, beginning with the Xbox 360 and PS3 lineups, and now Tony Ponce and I are here to tell you which Wii games you should want the most (with a bonus Wii U section for pure overexcited speculation). Let’s get this show on the road!

Minna no Rhythm Tengoku (renamed Rhythm Heaven Fever for the US) was one of my favorite games of 2011; it’s the only game of 2011 that I’m sure I’ll be playing over and over for the rest of my life. I brought the game to several parties over the winter holidays, and despite the fact that I was playing to generally non-gamer crowds, the game still went over like gangbusters. It’s instantly fun, endlessly replayable, and packed with content, and it plays upon gaming’s greatest strength — the ability to use controls, visuals, and sound to create a seamless bond between the player and the game. That’s something that a lot of rhythm games do well, but I think Rhythm Heaven Fever does it better than almost all the rest.

At its budget price, you would have to be a true hater of goodness and light to pass it up. If you think it looks too “weird” or “casual,” do yourself a favor by ignoring your own perception and relinquishing your judgment to me. Buy this game as soon as you can. You won’t regret it (unless they screw up the English localization again, in which case just import it).

Speaking of imports, I’ve already imported The Last Story, and I can say that it stands alongside Super Mario Galaxy and Skyward Sword as one of the best-looking, most painstakingly crafted games in the Wii’s library. Sadly, my Japanese is crap, so I’ll be importing this game from Europe or, hopefully, picking it up in the US later this year. I need to know what the hell is going on!

Fans of Hironobu Sakaguchi’s prior games (Final Fantasy I-IX, Lost Odyssey, etc.) or anyone who loves inventive third-person action-RPGs owes it to themselves to check this one out. It’s not everyday that you get to witness one of the most influential developers in the history of the medium reinvent the genre that they helped create.

We still don’t know a ton about Dragon Quest X other than the fact that Square Enix has been working on it forever, as well as how it aims to combine the strengths of MMOs with the traditional single-player RPG experience for something that will please both audiences.

The game is about one of two twins who is magically transformed into one of the game’s other races, sort of like the Melvin Van Peebles classic Watermelon Man, only less racist. That’s all well and good, but what I really want out of Dragon Quest X is the opportunity to explore a huge, Akira Toriyama-created world alone or with friends, experiencing all its fine details and, in doing so, creating my own story.

See what happens when a company digs out its ears and listens to the fans? It was pretty much like pulling teeth with Nintendo, but now Xenoblade Chronicles is on its way to the US. Sure, I could have imported the European version, but having a cheaper option is always nice.

I’m stoked, and I’m not even that big of an RPG guy! I’ve played several Final Fantasy titles, tried and failed to get into the Tales series, enjoyed Golden Sun, and dabbled lightly elsewhere. Still, all the positive word of mouth from our friends across the Atlantic is making it really hard to not get overly excited.

Speaking of games that have been out in Japan forever, here’s indie platformer La-Mulana. The game is finished, having gone through some last-minute bug fixes following the Japanese release, and now is waiting on Nintendo of America to give the go-ahead. Who knows how long that will take. There is non-console port on the way (PC, though a likely platform, isn’t actually specified), and it would be a laugh riot if it came out before the WiiWare version.

It’s no secret that my poison of choice is a nice, juicy 2D platformer with wonderful pixel art and a hefty amount of challenge. A game that tosses Castlevania, Metroid, and Indiana Jones into a blender and hits “frappé”? Obviously, it’s going to be a winner. If you want to play the game right now, the original has been available online for free since 2005. However, as with Cave Story, I’m curious as to the extent of the changes and upgrades in the remake.

I feel bad for Vblank’s Brian Provinciano. I like to joke about Retro City Rampage‘s lengthy development, and I enjoy hitting Brian up on Facebook with such constructive comments as, “What are you doing right now? BREATHING!? When you should be WORKING!?” In all honesty, I don’t envy his situation. The game has been in the works for nearly a decade, back when it was known as Grand Theftendo. Since then, Brian has had to jump through so many hoops just to see his baby through. Next time I see the man, I have to treat him to a steak dinner or at least some froyo.

At one point, Retro City Rampage was a Grand Theft Auto parody. I don’t know what it is anymore — it defies classification. It’s a love letter to 80s, an homage to videogames throughout the ages, and the debut of many Destructoid editors as game characters. You ask Brian to include something in the game, and the guy will probably find a way to squeeze in that reference. If nothing else, Retro City Rampage is going to be huge.

As for the Wii U, no real exclusives have been firmly announced for the thing yet, though we’ll be keeping a close eye for more news on Pikmin 3, Smash Bros. Wii U / 3DS, and Miyamoto’s new secret project. Then there is the promise of an enhanced Wii U version of Dragon Quest X, Batman: Arkham City, Darksiders II, Aliens: Colonial Marines, and many others.

I’d also be highly surprised if we didn’t get a compilation of some of the Wii U “experiences” that were on display at E3 2010. I’d love to see that Metroid-themed multiplayer shooter, Mario-themed hide-and-seek, Rhyhm Heaven-style pirate game, and (Shannon’s favorite!) Measure Up, all crammed into one Wii Sports-style, minigame collection pack-in.

Then there is No More Heroes 3, which Suda51 told me TO MY FACE is still headed to the Wii U. So while there is still a lot left to see confirmed, there is plenty to be excited about in 2012 for the wacky, wonderful world of Wii U.

Additional staff picks for the Wii / Wii U: