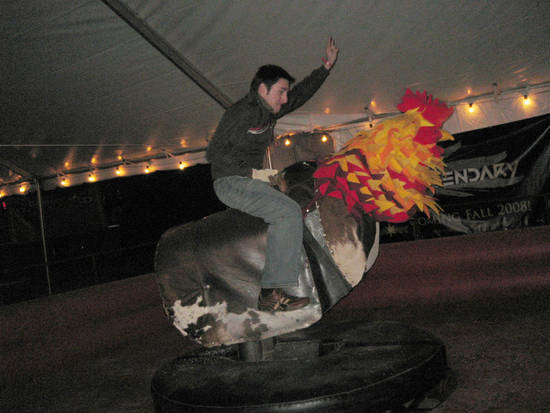 Yes, the above picture is of me riding a mechanical bull at Gamecock Media Group’s EIEIO 2008 that took place in Austin, Texas last week. (You can see a picture of me falling off the same mechanical bull in the gallery below; thank you very much Jay Fitzloff of Sandbox Strategies.) Good times indeed, but I was also there to see and play a few games, as well.

By now, you might have already seen our coverage of Velvet Assassin and Hail to the Chimp; if not, click on those links or go ahead and scroll down a few stories. But that’s not all the coverage we’ll have. I also saw Mushroom Men on the Nintendo DS and the Wii, and the Xbox 360 and PC action RPG, Dungeon Hero. I partook in the age of Internet meme battle that is Pirates vs. Ninjas Dodgeball, battled crazed werewolves in Legendary, and got a first-look at the sci-fi first-person shooter Section 8.

But that’s not all! We’ll also bring you a peek into the office of Gamecock Media group which — surprise! — is just as bizarre as you might expect. I’ve also been spending some quality time with the Nintendo DS title Insecticide over the past few days, and you should see a review up shortly (preview: it’s “a’ight”). Expect the full EIEIO coverage to trickle out over the next day or two (I wouldn’t want to blow our Gamecock load all at once), and hit the jump for a Gamecock produced video look at EIEIO 2008.

[Warning: Video auto-plays after the jump]