With Sonic the Hedghog appearing appearing in anything from sports games to rhythm titles lately, it makes sense that he would pop his tired head up in an RPG at some point.

However, not many could have foreseen that the blue hedgehog and his mentally ill friends would be appearing on a roleplayer developed by game community darling BioWare for the Nintendo DS. A strange proposition indeed, and one that led many to think that Sonic’s credibility may be rescued yet.

Has Sonic Chronicles: The Dark Brotherhood clawed back some respect for the much-maligned hedgehog? Can BioWare succeed where Sonic Team has repeatedly failed in recent years? Read on to find out. 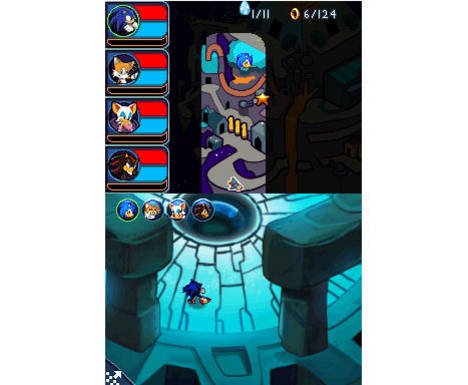 Sonic the Hedgehog has triumphed over Dr. “Eggman” Robotnik at some point in the franchise’s confused story, and has freshly returned from a hiatus to find that not all is going well. Knuckles has been kidnapped and brand new enemies, known only as The Mauraders, are stealing Chaos Emeralds. That’s pretty much the whole story in a nutshell.

The game is light on plot, and perhaps that’s for the best, given what happened with Sonic the Hedgehog‘s 2006 console release, and it is largely inoffensive. The dialog is  infantile at times, but there are some minor smirks to be had. Its main problem is that it lacks any sort of pacing. Even big plot points like Robotnik teaming up with Sonic are addressed in a matter of seconds and then accepted as part of the scenario. You literally find Eggman, he says he’s reformed, and that’s it, he’s now part of your team. It’s not quite Darth Vader throwing The Emperor down that big hole.

The main bulk of the game is spent fulfilling sub missions and using the various skills of your party to explore each area. This is all incredibly simplistic fare. The handful of available sub-quests mostly charge you with fetching/carrying or killing a specific enemy. You talk to someone, you go to where the star is on the map, you fulfill the object, and then you collect your reward and experience points. It barely gets more involved than that. 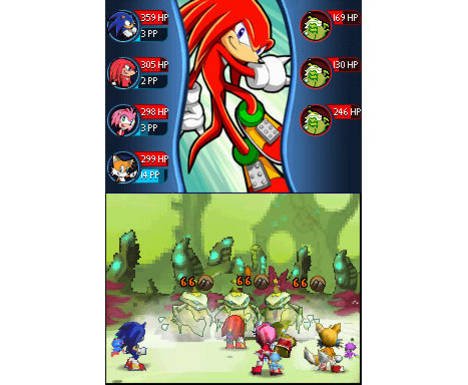 You can make a party of four from an ever-growing list of characters, each of them with their own special attacks and skills. In the overworld, you will use your party to navigate around the map, which is again, a very simple process. For instance, if there are some crates blocking your path, you tap the Knuckles icon at the top left corner of the screen to play as the dreadlocked echidna. You then move towards the crates and tap the icon that pops up to smash them. Similarly, if there is a large gap you need to traverse, you can make Rouge fly over it by again pressing the desired icons.

Everything is done using the stylus, which can be a pain in the backside. I am not a fan of any stylus-based movement in games. I find it awkward and clumsy and it’s simply not as efficient as using the D-pad. Sadly, the face buttons are all but useless in this game so the stylus is all that you have to navigate with.

BioWare also didn’t think to do what other games like The Phantom Hourglass or Lock’s Quest have done to alleviate some of the problems, such as having you automatically interact with a person or item just by tapping on it. In Sonic Chronicles, you must manually guide your character near to something and then press the icon that pops up. It really should have taken a page from other games and implemented these streamlining measures. 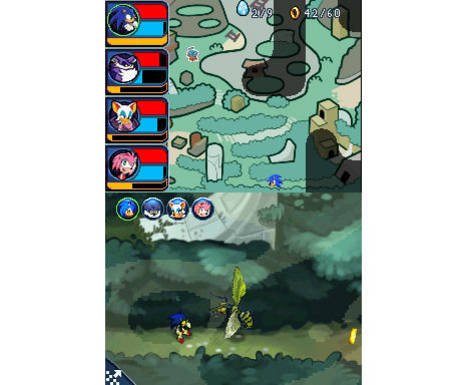 While navigation is a pain, the touch screen interface at least works well for battles. The Dark Brotherhood uses a traditional turn based structure, the kind that any RPG player will be instantly familiar with. Similar to early Final Fantasy titles, you input all your commands before a round of combat starts and then watch it all play out. Each round of a fight gives the combatants a chance to attack twice, and you can either choose to pull off two standard attacks, or use some POW moves.

POW moves are special abilities which are bought or upgraded with points when you level each character. They can be used to inflict damage on an opponent and usually have some extra potential effects on the battle. In order to successfully pull these moves off, you’ll have to input the various stylus prompts on screen, in a manner that reminds one of Elite Beat Agents. These commands range from tapping the screen in the right place at the right time, tracing the stylus across the correct path, or simply poking an area of the screen as fast as you can. Like everything else in this game, it’s easy stuff, but it’s certainly satisfying.

Combat is generally fun and the POW attacks are cool, but there are a lot of problems that get in the way of your enjoyment. First of all, characters miss their attacks far too often and it’s frustrating. While your hit rate improves as you level up, too much of the game is spent watching your character swipe thin air, which drags out combat for far longer than it should. At one point, I had an entire round of misses — that’s eight missed attacks in a row, which borders on farce. It doesn’t help that enemies can also evade attacks, making it even harder to get a decent hit in.

You also have too few POW points to make your special attacks viable in all circumstances. Using a special move takes up PP, and for most of the game, you’ll be lucky to get each character’s PP into the double digits, meaning that you’ll constantly be using items to keep them topped up.

The game suffers from severe balance issues. There are standard enemies in this game capable of murdering a character in only two hits, while your regular attacks often feel as weak as piss. There seems to be no real difficulty curve, and leveling up is so infrequent that you rarely feel like you’re improving.

Sometimes the enemy will try to escape, and you can attempt to stop them fleeing by taking part in a chasing minigame. This is — you guessed it — a simple feature, as your four characters run after the fleeing monsters and you tap each one to make them jump over obstacles. It is shallow, but it’s a neat little feature. Besides, it makes you feel quite good about yourself that the enemies are running, especially if it’s because you killed all their friends. 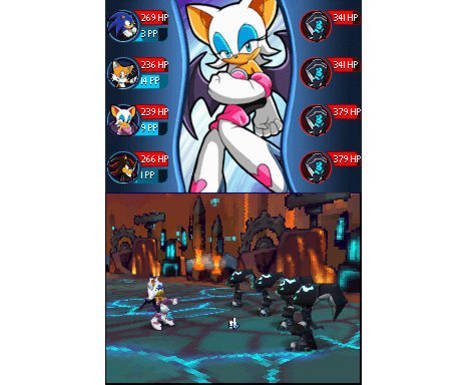 A lot of Sonic Chronicles seems to fly in the face of what makes an RPG fun. People who play RPGs like to grind, but enemies start to yield too few experience points for you to level up effectively. RPG fans also like to buy and find new equipment, but there is only a tiny sliver of it in the game. You can barely buy anything either, as the only way to find money in the game is by collecting a limited number of rings found in each section of the world. There is barely any cash to go around for the game’s tiny selection of shops, and rarely anything worth buying in the first place.

Where Sonic Chronicles does succeed, however, is in finally finding a decent use for Sega’s usually rubbish Chao characters. Hidden around the world are various Chao eggs to be be found and hatched. You can then “bond” one of these Chaos to each character and receive some special benefits. Some simply raise one of your stats, but rarer Chao can make each attack a potential one-hit KO, or even increase the chances that any Chaos you find in the future will be rare ones. Chaos can be wirelessly traded between players and this can make them more effective. It’s a great little system and easily the game’s strongest point. It’s just a shame that, like everything else, it’s just not quite robust enough. If most of the Chaos weren’t palette swaps, collecting them would be even more fun, and it would be great to do more with them than just bond them. Otherwise, it’s definitely a great idea with a lot of future potential.

That, however, is The Dark Brotherhood‘s most obvious problem — it is mere potential. That’s all this game seems to be. It has a lot of good ideas, but none of them are fully fleshed out and turned into truly great gameplay additions. The story is forgettable, the equipment and level ups may as well not even be there, and everything just feels half-finished. Even the menu system is an utterly confusing mess with equipment, items and Chao scattered randomly and icons dotted around the list showing who has what.

Graphically, the game looks good from a distance, but the character models really don’t hold up to close scrutiny. It’s certainly bright and cheerful, and the artistic style blends both a traditional and modern look that goes some way to removing a bit of the over-anime’d Sonix X nonsense. The music, sadly, is highly unremarkable stuff, and some of the sound effects are just confusing. I don’t yet know why a robot sounds like a troll having an orgasm. 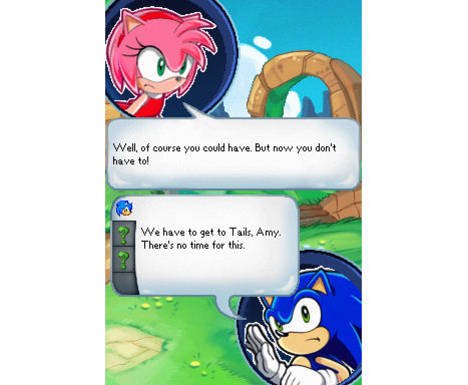 The real tragedy with Sonic Chronicles is that it actually isn’t that bad. Once the game hits the third chapter, it suddenly stops completely sucking — characters become a bit more effective, battles are more fun, and you have enough allies to start exploring the maps properly. It really can be fun at times, which makes it even more of a shame that huge aspects of it are mediocre. There is just enough in the game to make it worth a play through, but nowhere near enough to make it worth keeping.

If you’re a Sonic fan, possibly check this out because it’s a step in the right direction. However, baby steps for a franchise that needs massive strides to get credible again isn’t going to cut it.