Ever since I first heard of Patapon, I knew I had to try it. An infectious, cute, charming mash up of rhythm and strategy, flavored by a simplistic yet thoroughly eye catching artistic style sounded like all the makings of a portable delight. Now that I’ve had some time with this most unique little game, however, I find myself unable to decide whether to cuddle it or smash it against the wall.

This is going to be a difficult review, as I intend to try and discover whether or not this game is actually good over the course of writing it. Make no mistake — many aspects of Patapon make the player smile, and truly capitalize on the unique idea. However, for every feeling of joy, there’s a feeling of frustration, for every inspired moment, there’s something that doesn’t quite work.

This is Patapon, one of the biggest conundrums on the PSP, and the subject of today’s review. 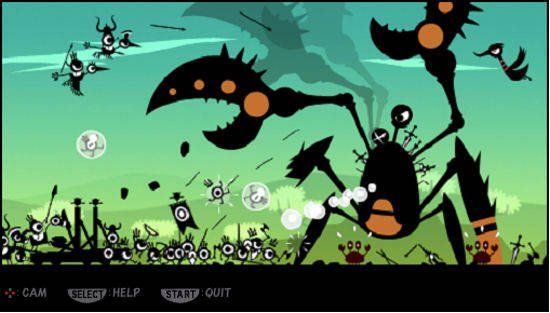 The premise of Patapon is either adorable or disturbing, depending on the level of thought you wish to put into it. Aaron Linde described is as Jihad for Kids, and I can certainly see why. Your role in this adventure is that of a God, known as Almighty, who has returned to lead the Patapon Tribe to the promised land. The Patapons were once a proud and successful tribe of living eyeballs, but they were driven out of their homeland by their mortal enemies the Zigatons. When you arrive as the new Almighty of the Patapons, you find a few scattered remnants and gather them together, slowly building an army of holy warriors to reclaim the land and journey to Earthend in a bid to find … IT.

You may only communicate with your tribe, however, by using a set of mystical drums that, when hit in the right sequence, will command the Patapons to do your bidding. Before too long into the game, you will get hold of four drums which are mapped to the triangle, circle, square and X buttons of the PSP which can be used to make the Patapons either march forward, attack, defend or summon a miracle. The patterns are simple, but keeping the right beat is crucial to keeping the Patapons active. 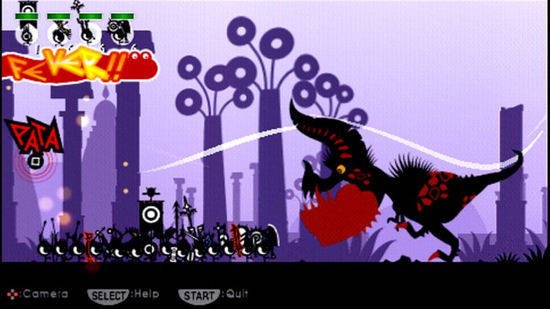 In order to make the Patapons march onward, for instance, you have to tap circle, circle, circle square. The Patapons will then march ahead while chanting “Pata, Pata, Pata, Pon” After they chant, you need to follow them with another command, either to keep moving forward, to attack or defend. That, essentially, is the game. It’s a very simplistic rhythm game in which you use four sounds to keep time with a miniature army and complete a level. However, this almost remedial premise hides a far deeper strategic system at work behind the little walking eyeballs.

Knowing when to attack, when to defend, when to march forward and when to summon a miracle is the key to ensuring your Patapons survive each encounter. Although the first few levels are dull in terms of their lack of options, once you get the defend command, you are suddenly faced with a far more essential need for timing. Getting used to enemy attack patterns and optimizing your sequence of actions is far more complex and engaging than one might be led to believe, and as the game progresses, the intensity of battles ramps up pretty quickly.

The trouble is, a game that requires such tight attention doesn’t feel tight itself. When you’ve input a command, you have to wait for your Patapons to obey, and then you have a very short window of time in which to decide your next move — which again, won’t actually be implemented until you’ve input the command and the Patapons have taken their time to comply. This isn’t helped by the fact that enemies can be hard to predict, and you can often find your Patapons out of attack range of an enemy, needing to get close, then missing their window of opportunity because they either got too close, or the enemy attacked first. Situations can change quickly, and switching up your tactics to deal with them in time is damn near impossible. 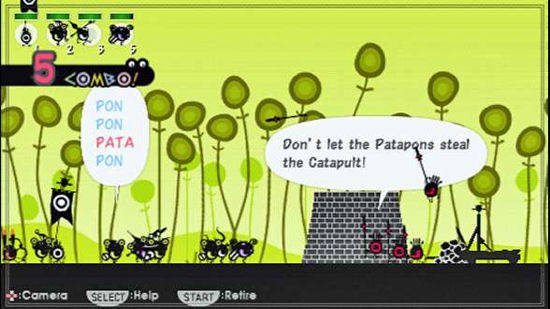 By far the number one priority in any given Patapon battle is the attainment and maintenance of “Fever.” If you input a command with absolutely perfect timing, or if you input ten commands successfully, your Patapon army will enter Fever mode, which sees them becoming a far more effective killing force. To keep Fever going, you just have to keep successfully commanding them, but should you mess it up, you’ll have to start the process over from scratch. Now, the first few times I achieved Fever, I kept instantly losing it and grew very irritated, and this is because Patapon is very, very vague about what it wants you to do at times. When the Patapons reach fever, they completely change their tempo and start chanting a new song, tricking you into thinking the beat has changed when it hasn’t. Eventually, you get the hang of it and learn to keep the same beat going on in your head for the entire level, but at first it’s excruciating.

This vague presentation of the rules hinders the game in other ways as well. For instance, sometimes I lost Fever even when successfully inputting a command. I knew it was successful too, since the Patapons obeyed the order. At other times, you will suddenly be thrust into a situation you’ve never encountered before with absolutely zero clue of how the game wants it dealt with. Being instantly mashed by a new type of fortress trap, or cooked alive in the desert before stumbling on the right course of action is rarely fun. It would appear that trial-and-error is part of the game’s MO, but frankly, it’s far too frustrating at times to be worth the effort.

Although at first it’s very vague, there are at least some subtle flashes of brilliance that, once discovered, keep the game more manageable. For instance, the screen has a pulsing border around the action that flashes in time with the beat, and your combo meter similarly reacts in time with the rhythm. Although keeping the beat in your head is by far the most reliable method, it’s neat the the game throws in such understated clues for you. 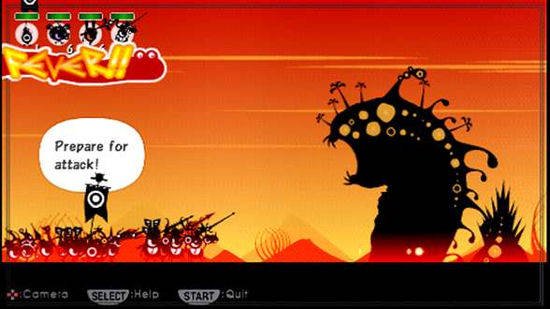 When you’re not fighting the Zigatons, you can hang out in Patapolis, the capital of the Patapons. Here, you can view the spoils of war, combine materials to create new Patapons at the tree of life, or engage in very simplistic, yet strangely addictive minigames to get ahold of more raw materials. Creating Patapons is a game unto itself, as you work to attain the best materials and create Rarepons, more effective versions the regular white Patapons with increased stats. You can also go hunting for food and Ka Ching, a form of currency needed to create more soldiers.

What you cannot do, however, is engage in battle with the Zigatons outside of storyline missions. Essentially, there is no true Free Play, and this is a huge omission. Zigatons, for the most part, are your sole source of new weaponry and equipment. If you want a set of shields for your axe-wielding Tatepons, or your bow-firing Yumipons are in need of some protective helms, well tough luck. You’ll have to battle through the story mode and rely on lucky item drops. In an army building game like Patapon, where the attainment of power is a driving force, having no ability to efficiently farm is very annoying, especially when you need to bulk up your army to face a particularly brutal stage.

You can at least take on the game’s bosses multiple times, and each time you successfully topple these huge and imposing monsters, you stand the change of acquiring a rare item. However, this option is damn near useless for adequate farming purposes, as each time you fight a boss, it gets progressively tougher and will inevitably climb out of your league. 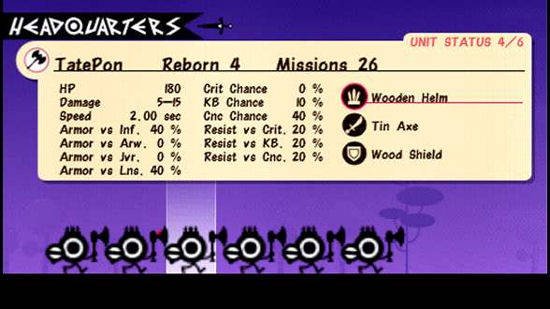 The game is chock-full of problems, and yet it still manages to present itself in such an endearing way that it almost — almost — wins your forgiveness. The team who brought us Loco Roco are masters at depicting a visually stunning world, bursting with character and austere charm. It’s bright and breezy, uncomplicated yet unmistakable in its artistic design.

As far as the sound goes … well. By now I’m sure you’re all aware of what to expect, but if for some reason you’re unprepared, be warned that excessive playtime WILL result in you hearing “Pata Pata Pata Pon” over and over in your head long after the game’s been turned off. The worst part is that the game can actually be more catchy than annoying, compounding the issue further. Once you achieve Fever and the beat kicks up into a funky tribal tune, you may find yourself almost sad to slip up just because of how bleak it feels when the cool music is gone.

Patapon is a noble effort at bringing some color into gamers’ lives and presenting something that’s as unique and fresh as it is lively and adorable. However, the game is just as prone to causing misery as it is happiness, as I discovered early on when my axe-wielders had been killed off and I was left with only ranged attackers who fell, one by one, to close quarters enemies that they just couldn’t hit. These kinds of issues are incredibly aggravating, and the various other frustrations amount to an experience tainted all too often by problems that could have been dealt with easily. There is a lot that feels missing from this game, and this appearance of an incomplete package kind of explains the cheap price tag (although we in the UK don’t get quite as good a deal).  Ultimately, this is a game I want to very badly to love, but just can’t. I like it, and I’ll sure as Hell play it a lot, but I can’t rate it that highly if I’m being honest, simply because of the volume of problems found within. 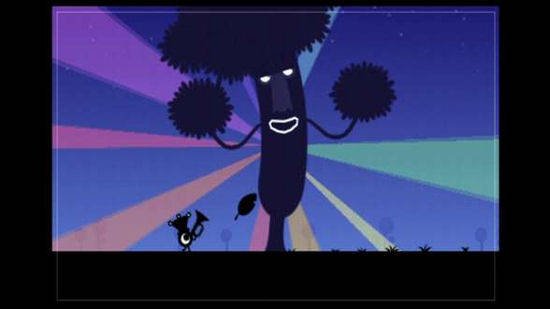 Long story short — Patapon is equal parts sunshine and rainclouds, laughter and tears. You’ll cuddle it one minute, then batter it to pieces the next. Definitely check it out, but try and borrow before you buy or at least grab the demo. You may very well love it but you may just as easily hate it.