Like its Xbox 360 prequel, Onechanbara: Bikini Zombie Slayers is a budget-priced title that focuses on the lives of four women, all in various states of undress, who spend all their time inserting swords into zombies, then quickly removing the swords, which usually leads to the zombies in question being cut into pieces.

As fun as that sounds, I still didn’t expect much from this game. With two more expensive, higher-profile zombie games also coming to the Wii this month, it seemed likely that Onechanbara: Bikini Zombie Slayers would end up being the runt of the Wii’s undead litter.

Onechanbara: BZS keeps from sucking by doing two things right: defying low expectations and never trying to be more than it is. So many games today reach for more than they can actually achieve, and end up falling flat in the process. That’s far from a problem with Onechanbara: BZS. This is not a game that aspires to do anything extravagant. It’s a game about cute girls killing zombies that features a surprisingly deep combat system, but that’s about all it is, and that’s about all it tries to be. 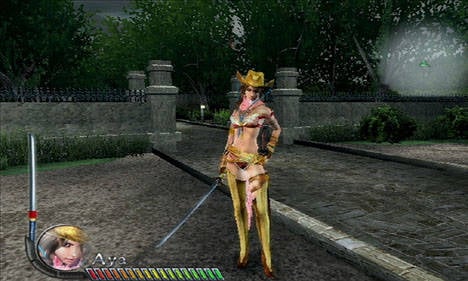 First, let’s start off with the graphics. I can’t tell you how surprised I am to tell you this, but really: they don’t suck. From a technical standpoint, the game looks like a mid-grade PS2 title. Nothing exciting about that, but the good news is that the game’s developers never try to make the game look like anything more than that, either.

Most of the crappier-looking Wii games don’t look bad because they don’t try, but rather, they look bad because they try to look good and fail. That never happens here. Backgrounds and characters are functional in design and unoffensive-looking, character animations are actually pretty detailed and expressive, and with the camera zoomed out most of the time, there is little chance to get a good look at how muddy the textures may be or how few polygons there are on screen.

The game also plays better than I expected. There is a certain flow here that could be easily taken for granted, but is actually pretty clever. Basically, the game consists of running through one of six or so environments, trying to get from point A to point B. There are occasional branching paths, but for the most part, it’s a linear affair. It’s the zombies, and how they show up, that makes things interesting. 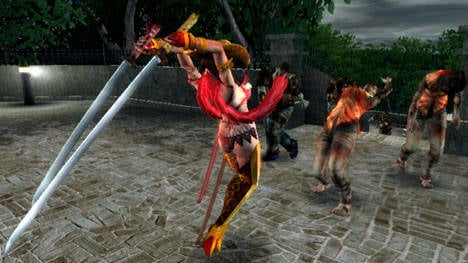 In the world of Onechanbara, you are always in one of three states of mind. The first is a state of running around looking for zombies to kill. I’d say that the longest you’ll ever be in this state is five seconds or so. There is almost always a zombie just seconds away, waiting to be killed.

The second state is the state of actually killing a zombie. This is the state you’ll be in most of the time, and it’s pretty fun.

The last state is probably the best one. It’s the “Oh shit! Where the hell did all these zombies come from!” state that is thrust onto the player every few minutes or so. You’ll see a group of five or so zombies down a hallway, but as soon as you run up to decapitate them, suddenly a fence of creepy bamboo forms around you and the immediate area, as fifty zombies pop out of the ground. In order to move forward, you have to kill them all.

As many times as this happens in the game, it never gets old. Now, the zombies in this game are incredibly easy (and fun) to kill, but having fifty of them thrown at you at once is still intimidating on a psychological level, especially after some of the tougher ones carrying Gatling guns and grenades show up. It would be a stretch to call it “scary,” but there is defintely something unique and surreal about running through a park or a Tokyo highway to suddenly have a fence grow around you and a horde of undead rise from the concrete, ready to bite your ass.

Once surrounded, things get pretty “viewtiful” pretty quickly. The more hits you land, the better grade on your “group combo” you receive, and the better your grade, the more experience points you get. Again, it’s all pretty basic stuff, but it all comes together in a palatable manner that never comes off as shabby.

Also worth noting is how awesome the game’s zombies are. There are about seven types in all, ranging from the standard “torn clothes, withered face” zombies, to big old Andre the Giant-looking zombies, to zombies made entirely of misty blood-fog. What’s more, these are the most durable zombies in zombie history. Cut off their heads, and they keep fighting. Cut them in half horizontally, and their legs will keep shambling at you, trying to get a lucky kick in. In all my years of zombie-loving, I’ve never seen zombies quite this persistent.

As for the fighting system, it’s easily one of the most detailed and interesting I’ve seen on the Wii thus far. Each character has two completely different fighting styles (toggled with the C button) a projectile (or two), a special attack, a regular attack, a launcher, a lunge move, a kick (for breaking a zombie’s block, of course), a jump, a dodge, a taunt, and Z targeting (with … wait for it … the Z button). Some will complain that there is too much motion control in the game, as most standard attacks are performed with a quick shake of the Wii Remote. That’s defintiely a matter of preference, though, because I found the controls to be a lot of fun, and much more responsive than those found in other Wii beat-’em-ups like Soulcalibur Legends or Star Wars: The Force Unleashed 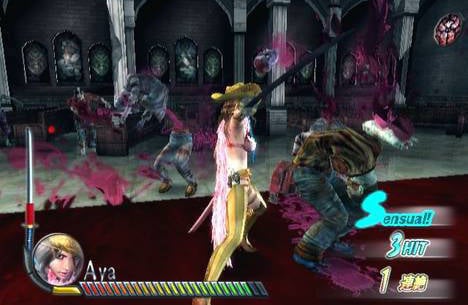 As if the game didn’t already offer enough in terms of combat options, Onechanbara: BZS’ developers also made sure that the game’s four protagonists play nothing like each other. Aya, the girl in the cowboy hat and the bikini, is all about swordplay, and fights with either one or two katanas. Her younger sister, Saki, has a sword, too, but also hosts an array of brutal hand-to-hand combat techniques. Their rival, Misery, fights with a big, slow sword that can shoot out like a whip, and Reiko, the librarian-looking lady of the bunch, goes all Dante on us with both guns and swords. When using her guns, you actually get to aim using the Wii Remote pointer at the screen, which totally changes the way the game feels. This little addition of pointer controls is just one of the many little details about the game that made me realize that it’s not just another budget title.

The two things I’d change about the game are its bosses (or lack thereof) and its length. The only real boss fights in the game are against other playable characters. These fights are fun, and are definitely more challenging than the rest of the game, but they never compare to stuff like the zombie orca battle found in the 360 version of Onechanbara. The game is also really short; playing on Normal difficulty, I got through the game in a little over three hours with Aya, and only died once along the way. Keep in mind, though, that in those three hours, I killed over 1,500 zombies (no, I didn’t count them myself; the game keeps track for you), which averages out to about one dead zombie every seven seconds. It may just be three hours long, but those three hours are packed with more woman-on-zombie violence than you can probably stand anyway.

Playing the game on the harder difficulties will definitely add to the replay value, as will playing through one of the other character’s scenarios. Each has her own story (told with voice-over only), fights slightly different enemies, and takes on the stages in a different order. You won’t really see everything that the campaign mode has to offer until you’ve beat it with everybody, which should take no less than 12 hours total. Add to that the game’s Achievement-like “quests,” which need to be completed to unlock additional costumes for the girls, as well as the two-player co-op in Free Play and Survival modes, and you’ve got at least another 5 hours right there. 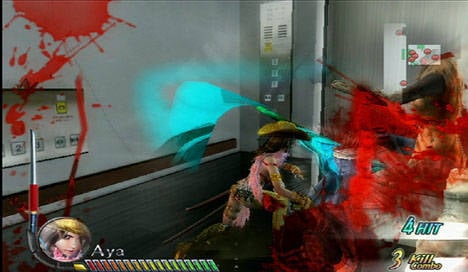 I guess you could say that Onechanbara: BZS is like Dead Rising except more drunk, more dumb, and more horny. Whereas Dead Rising is really all about forced replay through the same situations while killing as many zombies as you can in the process, the game doesn’t necessarily want you to know that that’s what it’s all about, and instead tries to hide behind stuff like “story” and “challenge.” Onechanbara: BZS has no such inhibitions. It knows what it’s good for and what it’s not, and it’s not afraid to show it. It’s hard to imagine that the game’s developers were going for anything more than a 7.0 with this game, and in my opinion, they just barely missed the mark.