Ever since it was released on the PS2 back in 2006, gaming journalists have ranted that Okami is the closest one can get to a 3D Zelda game on a non-Nintendo console. Two years later, the comparisons between that huge Nintendo franchise and the “underdog” original Capcom I.P. (awesomely clever pun intended) still haven’t let up, in no small part due to the fact that every Legend of Zelda game released since 2006 has “borrowed” from Okami in some way. The protagonist in Twilight Princess is a wolf, ridden by a wise cracking, anthropomorphic animal weirdo (just like in Okami) and Phantom Hourglass features the ability to cut grass, hookshot, and kill enemies via on-screen scribbling (just like in Okami).

As compelling as these similarities may be, the real reason the gaming press can’t stop ranting about Okami and its Zelda-like qualities is because we can’t believe more of you didn’t buy it. The game sold like crap on the PS2. Now that Okami has been ported to the Wii, is it likely to finally move some units? Do the Wii-enabled motion and pointer controls improve the game, or damage it? Most importantly, does the game even deserve all the hype it’s gotten over the past two years?

Okami has already been reviewed to death, but a game this fantastic can always use a little more praise. The first thing that will blow your mind about the game are the visuals. Okami is the definition of excellence in visual design. The amount of punch Okami packs with its simple, PS2-era graphics truly puts other developers to shame. The game’s look could best be described as “ink-shading”, a modification of cel-shading, except with a much needed infusion of class. Okami is a fully animated, classical Japanese ink painting. It’s a feast for the eyes unlike anything else in the visual art world, video game or otherwise.

Part of what makes the visuals so effective is the way they match the game’s scenario so perfectly. Okami‘s story follows the sometimes light-hearted, sometimes planet-altering exploits of Amaterasu, the Japanese sun goddess. The whole thing plays out like a cross between Princess Mononoke and Bruce Almighty. Though most of the people you encounter throughout the game see Amaterasu as just a regular wolf, the goddess is secretly improving all of their lives in ways big and small. Killing the demons plaguing the land is part of it, but so is causing the sun to come out to help an old lady dry her laundry, and fixing the waterwheel on the mill of the local sake brewery. Like the “happy points” system from the cult hit Chibi Robo, being a helpful wolf goddess in Okami accumulates “praise points” that can be spent on increasing your life meter and other stats. It’s a surprisingly satisfying diversion to take a break from the Zelda-inspired overworld and dungeon-exploring grind to instead do some simple favors for the people of Nippon. 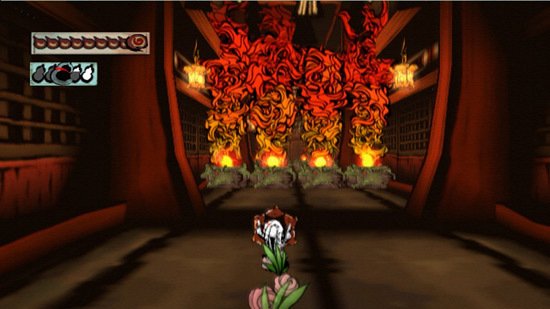 Beyond these philanthropic diversions, Okami is structurally identical to a 3D Zelda game. Puzzle-filled dungeons containing huge bosses that require weapon specific strategies to defeat, a huge overworld to explore, and items to collect; all the staples that have made the Zelda series great. In fact, there were times while playing Okami that I was shocked to not hear the signature “puzzle solved” jingle found in the Zelda games, as I was subconsciously convinced that it was Zelda I was playing.

The major diversion Okami takes from the Zelda blueprint is the replacement of the sub-weapon system with something called the “celestial brush”. In a process normally reserved for touch screen-enabled gaming, Okami gives the player the ability to break the fourth wall by drawing on the game’s world, vastly altering it in the process. There are over twenty different brush techniques in the game, ranging from the “viewtiful” ability to slow time, the above-mentioned hookshot, and the ability to create fire, ice, lightning, bombs, and multiple other attacks and skills. Fans of the latest Zelda outing on the DS who have never played Okami should do so, if just to see how much Phantom Hourglass borrows from the game. 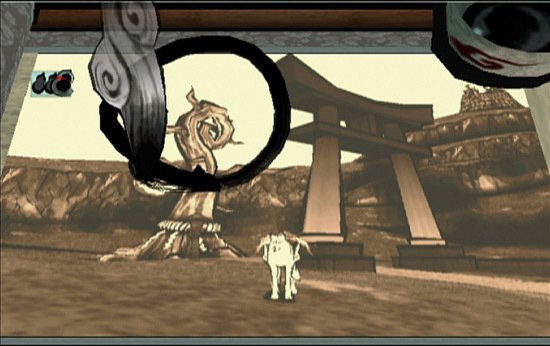 The celestial brush is one of Okami‘s greatest strengths, but the way it was implemented in the original PS2 edition may have been part of the reason behind the game’s tepid reception. When it’s time to draw on screen, the entire game freezes, changes from a full-color to a sepia-toned presentation, and a giant brush appears on screen. It’s not the most immersing gameplay concept ever conceived. On the PS2, the lack of immersion that comes from the “brush play” side of Okami is a larger issue due to the way the brush is controlled. While the PS2 controls are precise, they inadvertently ruin the real purpose of the celestial brush; to provide the player with the sense that they are a god sitting in their home, viewing a real world on their television where they can create miracles with the wave of a hand. Instead, the DualShock controls only provide the player with the sense that they are playing a video game where the action stops every few seconds, forcing you to leave the game world and instead use your thumb to move a brush around the screen. Okami on the PS2 is still incredible, but it takes hours to adjust to this inherent control flaw and the way it kicks you out of the game.

This brings us to the Wii port of Okami. The difference between this build of the game and the PS2 original is enormous. While the PS2 brush controls were sluggish and distancing, they were incredibly easy to perform. Drawing a perfect line in Okami with the analog stick was a simple as pressing the stick in the desired direction. In this way, Okami’s PS2 controls were the equivalent to the auto-aiming found in Resident Evil 2; dummy-proof, but stagnant, with no capacity to provide a sense of mastery or skill building. On the Wii, you will screw up your brush techniques for the first few hours you play because (gasp) the game actually requires some skill. This isn’t due to the controls being poorly implemented. It’s because painting a straight line in real life is quite hard. That’s why man created rulers. 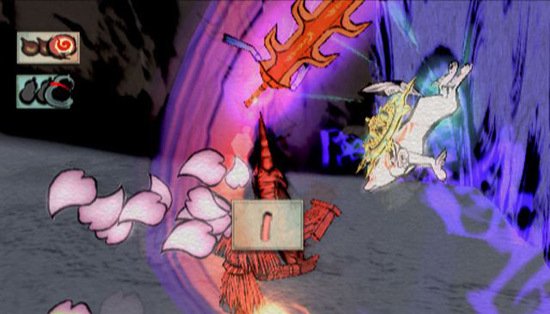 Once you develop the skill (and the muscle memory) to effectively make a straight line in the Wii edition of Okami, it becomes second nature. This actually causes the game to move much faster on the Wii than on the PS2. The brush on the PS2 build of the game would only move at a specific, predetermined speed. On the Wii build, the brush moves as fast as your hand moves. Those with skills will be whipping out brush techniques with lightning speed, far faster than possible on the PS2. Actually, the slower your brush strokes in Okami on the Wii, the more likely you are to mess up with a shaky, squiggly line. Again, just like in real-life painting or drawing.

In the end, though, a game’s controls are not about how easy they are or fast they are, but about how well they immerse and engage the player. That is why this Wii port of Okami was necessary. Creating brush strokes with your arm and seeing the 1:1 results on-screen builds a real feeling of connection between the existence of the player on one side of the screen, and the game world on the other. Where Okami’s controls on the PS2 only worked to build a wall between players and the game, the Wii controls actually break the wall down. 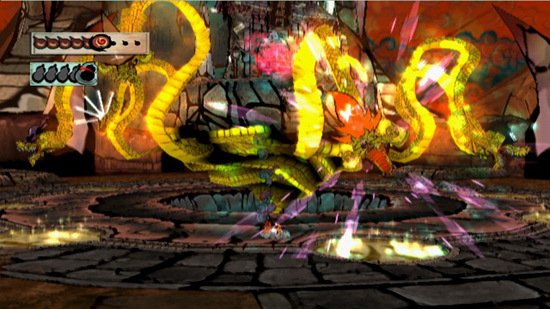 Also worth a quick mention are how the motion controls work in Okami‘s more basic functions, like melee combat. Again, the PS2 build of the game’s controls are decidedly easier. Button mashing yields huge, skill-free combos on the PS2’s Okami, where the Wii build’s motion controlled attacks require strict timing to perform. The trade-off is again between ease and depth, with the more mindless but simple controls to be found on the PS2, and the more skill-intensive but difficult controls on the Wii.

That being said, if you loved the way Okami played on the PS2, you will likely find the motion controls on the Wii port to be initially jarring at best, frustratingly difficult at worst. If Ready at Dawn and Capcom really wanted to create the ultimate version of Okami, they would have allowed for classic controller and/or GameCube controller support. This “classic” or “easy” mode would have made Okami on the Wii the inarguably perfect version of the game. But as it stands, the Wii port is still the superior cut, with its more accurate and responsive controls, widescreen support, and slightly enhanced visuals (whites are whiter, brights are brighter), not to mention the $40 price tag. 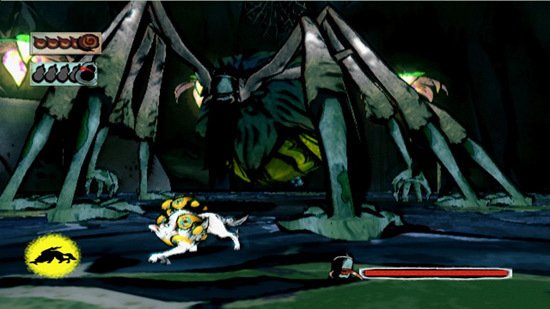 In closing, Okami is a must-have title for anyone who has ever loved a Zelda game, a Clover Studio game, or any time-intensive 3D adventure game. The only people I would advise against buying Okami are those on the extreme left or extreme right of the “casual/hardcore” gamer divide. Okami for the Wii is too complicated and demanding for the Wii Sports crowd, while hardened “gaming gladiators” may find the title’s requirement of skills beyond “excellent eye/thumb coordination” to be too much for them. If you can handle a traditional adventure game that requires both a thirty- to fifty-hour time-sink and engaging in some actual, physical movement, then buy Okami on the Wii. It’s one of the best games to come along in years, and arguably the best adventure game on the console, period.