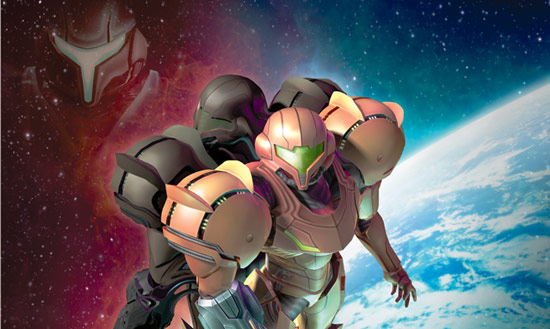 If you own a Wii, chances are you’ve spent the last month biting your fingernails to the quick in anticipation for the final installment in the Metroid Prime series, Corruption. For the hardcore crowd, there’s a lot riding on this game’s quality and success; Metroid Prime 3 is the first big release to be built from the ground up for the electric blue wonder. It’s not a GameCube port, not a mini-game collection, not a sports title, not a toss-off Pokémon cash-in, but an original Wii title that you can actually play. Whether you like the series or not, Metroid needs to be the royal flush in the imaginary last hand between the casual and the hardcore set.

This is do-or-die time for the “novelty console”, folks. They’ve tied the cute little fella to the conveyor belt and pushed him toward the buzz saw. Will Batman submit to Joker’s internet chicanery and post a ruthlessly negative screed in a blatant attention grab? Or will Robin take Penguin’s payoff money and write a glowing but heartless puff piece?

Hook your grapple lasso on the jump for my review.

I’m sure you’ve heard by now: the most revolutionary aspect of this game is also what makes it such a blast to play. Metroid Prime 3 controls like an absolute dream. In simple terms, you use the nunchuk analog stick to move Samus about, and point the Wii remote to aim and fire. The golden combination here is the option to employ advanced reticule sensitivity (in which the “dead zone” of movement is at its smallest on-screen) coupled with a handy lock-on bound to the Z button. This gives you the ability to center your screen on a particular enemy while still shooting at anything that crosses your vision. Locking onto enemies is a godsend when you want to perform precision strafing or circle around an enemy, but it’s not essential to success; those who stick to free-firing can certainly do so. What makes this control scheme so unique is that it actually works. Retro Studios has created a functional Wii first-person shooter, and in doing so has also crafted the most successful installment yet on a console.

I never had a problem with the control scheme in previous Prime titles, but after playing Metroid with the ability to look around freely while moving, to dodge a boss while also aiming and shooting as you’re running away — it makes the older system feel downright antiquated. The new control scheme lends a tremendous sense of engagement to the battles that was lacking before, not just from the Metroid series, but from the entire lineage of first-person shooters. The movements are so fluid and natural that this game is sure to draw new converts to the genre.

There are a few other touches sprinkled throughout that take full advantage of the Wii’s capabilities. You’ve got the ability to rip shields off of enemies by slinging your nunchuk, as well as several lever pulling tasks to gain entry to locked rooms. Much more than janky add-ons, these aspects have the cumulative effect of creating an unparalleled sense of immersion. Never before have I felt so close to physically being inside a game’s world.

Beyond the phenomenal control updates, however, the core gameplay mechanics have remained largely the same. This is definitely another chapter in the Metroid Prime series. Corruption features only a few new suit upgrades that weren’t included in previous Metroid games, and generally unremarkable ones at that. While it’s always good to see the old Ice Missiles and Plasma Beam, it’s time for Samus to learn some new tricks. In their favor, Retro has been very upfront about this by naming it Metroid Prime 3, rather than Turbo Ultra Metroid Wii-tastic.

But even if you lower your expectations by that tiny notch, you’ll still be impressed by the unparalleled execution in the game’s essential design. The previous Prime titles were marked achievements in art direction for the previous generation of game consoles, but I wasn’t expecting to see many graphical improvements in this installment. Perhaps that’s why I was so floored when I encountered complex textures, normal mapping, and lush organic environments at every turn. There’s a round, fleshed out feeling to everything in the game that isn’t made of metal.

If you were impressed by the way the GameCube handled Resident Evil 4’s lighting effects, then prepare yourself for the light show this game has in store for you. Explosive colors saturate each of the planets, providing a captivating backdrop to every puzzle or battle. You might find yourself using the Screw Attack just to watch the circular yellow flashes arc across the screen. There are dozens of breathtakingly pretty scenes to traverse through that will give you that classic “Metroid” tingling down in the pit of your stomach. Long-time fans will know what I’m talking about: those rare moments where you experience the harmonious fusion of art and entertainment.

Don’t be put off by all this art talk if you’re looking for hardcore action gaming; Prime 3 is no cakewalk and offers a fine challenge with its frenetic shooter showdowns. Much of this challenge, however, comes from not knowing exactly what to do in a particular boss battle or puzzle and fighting to stay alive while you figure it out. Figuring out the game’s mechanics and patterns will give you a bit of an advantage if you play Normal mode first, so those players looking for a truly tough experience would do well to start out on Veteran mode. These options are both available for first-time players at the game’s start.

Speaking of bosses, Corruption features some of the best boss battles we’ve seen in recent years outside of Shadow of the Colossus. As massive and epic as previous titles, Corruption shakes things up with several bosses equipped with a slew of alternate forms at their disposal. Some even have up to nine different mutations they can swap on the fly, constantly keeping you on your toes. The variety in combat and inventive boss design schemes prevent the battles from resembling the sluggish grinds of attrition in earlier Prime titles and are a definite highlight of the game.

When you’re not tearing alien bat-dragons to shreds, Metroid Prime 3 also happens to be an adventure gamer’s paradise. The environmental puzzles in this game are phenomenally complex and enthralling. You’re given Herculean tasks to accomplish that are brought about by dozens of interlocking tiny missions. The payoff and sense of personal satisfaction is immeasurable — “I built that destructive device with my bare hands before I dropped it on that city! I am the king of my living room!”

Unfortunately, Corruption is not without a handful of confusing tasks that are counterintuitive and don’t seem to flow naturally. These sections that leave you wandering around wondering what to do next can bring tedium to the game’s otherwise measured pacing. They’re not game-breaking, but they’re enough to demand better environmental or textual cues for problematic sections where players tend to get off track.

What’s worse is that sometimes the game’s hint system can be downright misleading. There are a few instances in the game that will easily throw off a player who isn’t devoting their time to reading every piece of scanned information. I’m fine with venturing out on my own without a nanny computer coddling me through the game — striking out in the wilderness and exploring is one of my favorite things about this series. The problem, though, is with the hint system’s inconsistencies. I never developed a solid relationship with the game’s hints where I felt like I could trust it to lead me in the right direction at that moment. A player shouldn’t be led off track by extending the game’s messaging system the courtesy of actually believing it.

Another detracting factor for the game is its horrendously weak opening. The first section of the game seems loaded with needless filler, whereas in the other Metroid Prime games they toss you into the action immediately. In Corruption’s first hour the action just seems stalled compared to the rest of the game; the setting is terribly bland and starts things off on the wrong foot. I don’t see any reason for such a great game to begin without firing on all cylinders. The addition of human, speaking NPCs in Corruption feels out of place and subverts the isolation that has become the series hallmark. The whole “stranger in a strange land” vibe is effectively destroyed with the inclusion of English-speaking military types — how lonely and existential can you feel when you’ve got soldiers piping through your headset every hour?

Thankfully, the human NPCs reappear at only a few rare points throughout the game. But each time they do, it’ll give you the same sinking feeling you experience whenever your favorite band does a song for a fast food commercial. Somebody at Retro was sippin’ a little of the Halo syrup and the game certainly suffers from it. There’s even a squad based attack section with these squishy-faced losers which was, admittedly fun to play, but it absolutely does not belong in my Metroid series. That’s right, I get final say.

Keeping in line with another series tradition, you’ll often find yourself backtracking to collect last minute items that will help you access the final boss. Corruption, fortunately, really shines in this department compared to its predecessors. The backtracking is not a last minute afterthought employed as a cheap gimmick to extend the game’s running time. When you backtrack in Corruption, entirely new sections open up on the old planets you’ve already explored — not just pockets with missile expansions once too high to reach without a double-jump. There’s no need to brace yourself for a boring, 3-hour slog through useless errands or needless item collection. The game quickly builds to a suiting finale, and while the final boss battle may disappoint some after the long trail of ferocious bosses that precede it, I doubt anyone will find much to harp on about the game’s closing chapters.

After the unadulterated fun I’ve had this week with this title, I don’t even mind that my Wii might be merely two GameCubes taped together. All I care about it is that I can finally use it to play a uniquely beautiful and exciting game that would be impossible to experience on any other console. If you like action games, adventure games, puzzle games, shooters, or if you simply want to see where the future of game development is headed, this is the game for you. For those of you without a Wii, this is the excuse you’ve been waiting for to pick one up. Metroid Prime 3 is the definitive entry in the Prime series that delivers on the long-awaited promise of the Wii as a console that caters to the hardcore crowd.