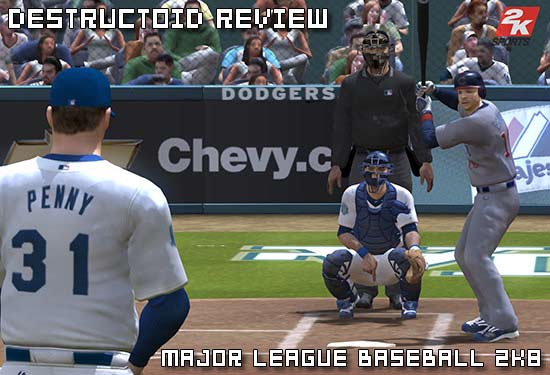 What’s this? A sports game review, in MAH Destructoid?

Ah, baseball…America’s national pastime. It’s my favorite sport, and as an avid fan and a hardcore gamer in general, I’ve always been heavily invested in the outcome of its digital representations. So each year, I scour gaming websites for reviews and opinions on the newest iterations of the numerous sports franchises out there. But lately, I haven’t had to spend as much time doing that.

As most gamers know, exclusivity deals for baseball and football videogames for 2K Sports and EA, respectively, have completely transformed the market. Ask pretty much anyone except the publishers themselves, and you’ll hear that exclusivity is the bane of gamers everywhere. But EA and 2K are surely working hard each year to refute that idea, though arguably, they haven’t been entirely successful.

Will this year’s effort be scored as a hit or an error? Does 2K Sports strike out looking or go down swinging? Will I stop making awful baseball puns? Is Major League Baseball 2K8 a worthy successor to EA’s MVP Baseball 2005 atop the throne of baseball videogame supremacy? Read on for the verdict.

The only title that MLB 2K8 takes from anyone is that of “Best Argument Against Exclusivity Deals”. Previously, three games tied for that dubious honor: the 360 version of Madden NFL 06, and the PS3 versions of Madden NFL 08 and MLB 2K7. There’s a decent amount of stuff that this game does very well, but loads more that it doesn’t. Here’s a bad omen for the rest of the review: on my sheet of notes that I took as I played the game, I came up with about three times as many bullets in the “bad” column as I did in the “good” column.

In my notes on the game, which came from Ben Brinkman, its executive producer, I listed a number of facets that he had mentioned as positive aspects or improvements in MLB 2K8. Many of those promises were unfulfilled, at least on the PS3 version that I was playing. But I’ll start with the good stuff; just know that after these next few paragraphs, it’s going to be mostly downhill. 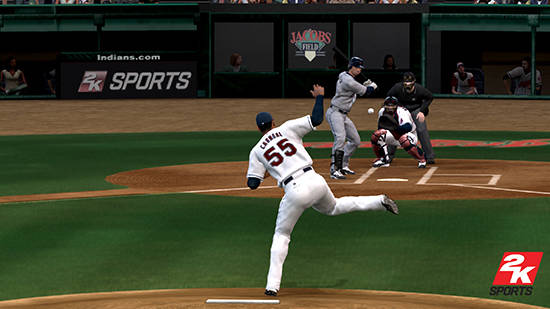 The implementation of 2K Sports’ Signature Style™ in this game is great. The accuracy of stadiums is impeccable, right down to the giant Coke bottle on top of the Green Monster at Fenway. This extends to the players themselves — windups are pitch-perfect, as are batting stances. From Dontrelle Willis’ high leg kick to the slow twirl of A-Rod’s bat, it’s all in there. Unfortunately, faces are wildly inconsistent — for example, Willie Randolph and Johan Santana closely resemble their real-life counterparts, but A-Rod and Hideki Matsui just look…off.

While we’re discussing the accurate representation of the ballpark ambiance, let me bring in 2K’s Stadium Beats. This fantastic feature essentially works as a stadium jukebox: you can control the sounds and music that the game will play for pretty much any event in a game. Like, you can set the list of songs (or sound effects) that you’ll hear after a single is hit by the home team. Yeah — it’s that specific. And there are lots of options: for example, thirty different choices are available for what you hear when a new pitcher is introduced. MLB 2K8 really excels in making you feel like you’re at the ballpark. That’s except for the largely indie soundtrack, which got on my nerves really quickly (mostly from a lack of variety — 17 songs just isn’t enough — but also because I’m not a big fan of most indie music). But of course, your mileage may vary.

The presentation is also solid. The menus have been overhauled from last year’s iteration, as have the in-game graphics, which have a burgundy-and-black color scheme that’s somewhat reminiscent of the one used by ABC/ESPN. I like the way the menus are done: there’s just a bar (with drop-down options) that runs across the top of the screen, which leaves most of the screen real estate for the game content. However, the interface can get too cluttered at times, especially in franchise mode — I saw the main menu load up and instantly thought, “Whoa, information overload.” The in-game commentary is covered yet again by the ESPN duo of Jon Miller and Joe Morgan, but with no new content recorded this year, they often repeat themselves and make mistakes. 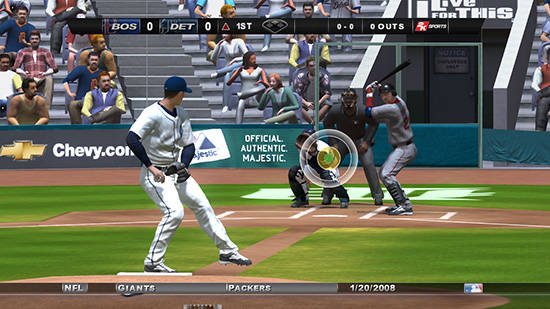 And now we come to the heart of the matter: the gameplay. In an effort to increase immersion, 2K Sports has completely revamped the controls and AI for hitting, pitching, fielding, and baserunning, to varying degrees of success — and analog is the name of the game here. The new pitching interface, for example, has its pros and cons. If you’ve played EA’s skate., then you’ll have a leg up: pitching is controlled solely by the right analog stick. The system has three steps. First, you decide power by going in a direction and deciding on how long you hold it. Then, you’ll make another motion that will start the accuracy meter going. Lastly, you’ll let go of the stick to determine the accuracy.

Sound complex? It is, and it depends on the pitch type. For example, to throw a fastball, you pull straight back, then flick the stick straight up. A cut fastball starts out the same way, but then you flick diagonally up and left (or right, if you’re a southpaw). But to pull off Mike Mussina’s knuckle-curve, you’ll need to go diagonally down and left, and then go 360° counterclockwise to arrive back in that “southwest” direction. It’s difficult, but it’s infinitely more rewarding than hitting square three times. With runners on in a close game, I struck out a guy to end the eighth inning with Andy Pettitte, and I legitimately felt like I’d accomplished something.

But here’s the problem, and it’s a major flaw: the new interface is entirely too unforgiving. After each pitch, the pitch select overlay will display the analog stick movement you made for the last pitch, and it’ll rate your accuracy on a 0-to-100 scale. The number of times that I swore I executed a pitch properly, only to let up a homer and see a 0 for a “meatball” after the fact, was too high to count. Also, I was only playing on the Pro difficulty level, and this was after I had turned down the Total Pitching Control difficulty using the game’s sliders. That’s the thing, too — when you mess up, the CPU will make you pay for it, usually in dinger fashion. Eventually, I just wanted to switch back to last year’s push-button system, and I’m sure that’s not what 2K wanted to induce. 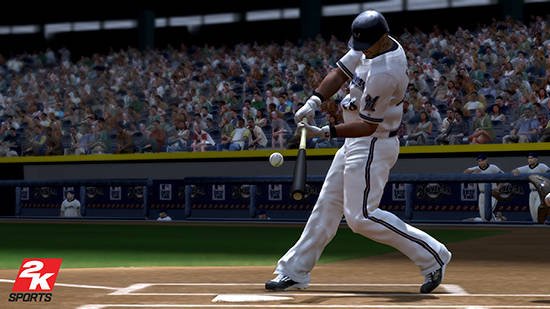 The new hitting system, Swing Stick 2.0, quickly forced me to switch to the Classic interface. But that’s probably more because of my suckitude as opposed to a problem with the system. I just couldn’t get used to pulling the right analog stick back (to step) and then pushing forward (to swing). The on-field throwing system has also been moved to the right stick, and it’s the best control improvement I’ve seen in a baseball game in years. Let’s say your shortstop just fielded a grounder, and you want to throw the ball to second for a force-out. The stick determines lateral and vertical accuracy. Merely flick the stick upwards, and the throw will sail; hold it too long, and the throw will end up in the dirt. And if you go more “north-northwest” than “due north”, your throw will be on the left side of the bag. The depth of this interface is something that the competition just doesn’t have.

The graphics in this game are a mixed bag. 2K Sports’ games all have a depth-of-field filter, but it simply doesn’t look right, leading to the “Vaseline sheen” that’s familiar to fans of 2K’s titles. Then you have the cloth physics, which are flat-out weird: jerseys will flutter violently in the wind — though eerily, only the midsection is affected. But 2K’s worst offense by far is the framerate, which is downright awful. The first play I saw in this game was a grounder that I fielded with A-Rod, and the camera stuttered as it followed the throw over to first base. Brinkman had promised that this wouldn’t be an issue in the batter-pitcher interface, but I even encountered a few instances of slowdown after a pitch was released.

Interstitial screens take a noticeable moment to load, so doing things like skipping replays is a chore — you’ll be mashing your X button. In addition, the collision detection with certain actions is bad; this is most noticeable with sliding, where a player will get up through the fielder covering the bag. Collision detection also doesn’t seem to exist outside the boundaries of the field. Jack a ball into “the black” at Yankee Stadium, and it’ll just stick to the surface instead of, you know, bouncing like it should. 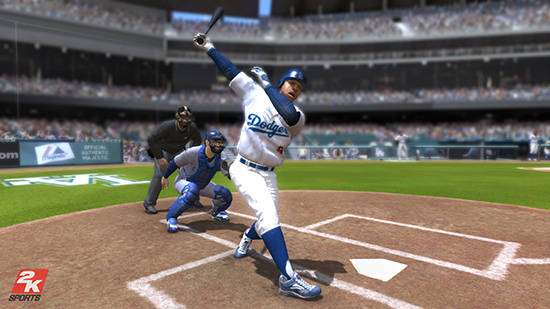 The game does have a good amount of different modes, including a deep Franchise mode with over 90 minor league teams (A, AA, AAA), and a Home Run Derby. Don’t play that, though — for some retarded reason, you have to sit there and watch the CPU hitters take their 10-out turns. Why would I want to hit 20 homers and then wait while seven other hitters try to beat that? Can’t that be simmed? But the new trading card system is a cool addition. You unlock cards by achieving various in-game objectives (get three hits with Ichiro and you’ll get his card), and you can use them to put together a card team to take online.

Oh, boy…online play. This is also not a selling point. There are numerous lobbies to separate the men from the boys by game type (advanced, simple, “strikes only”), and when you enter them, you can use text chat (there’s no headset support). I had a tough time just getting into a game — I guess everybody is buying The Show, because on a Saturday evening around 6 PM, there were only two other players online, and I couldn’t connect to either of them to play a game.

While the lag doesn’t technically make MLB 2K8 unplayable online, it’s bad enough to be a severe detriment to enjoying the game. There was a delay between pressing X and actually swinging, so I had to assume that my opponent was throwing a fastball every time — if I wanted to hit it, anyway. He/she seemed to do the same thing, even though I was using Andy Pettitte, whose fastball tops out around 90 mph. That’s no fun.

2K has made a valiant effort, and where MLB 2K8 gets it right, it excels. But I just can’t recommend it on the PS3 if you’re looking for a good, fun game of baseball. I’ve only played the demo of its competition, MLB 08: The Show, but I liked it a lot, so maybe you’d be better off giving it a shot. Unfortunately, that’s only an option for gamers that have a PS3, PS2, or PSP — so for your sake, 360 owners, I hope this game plays better on that console.