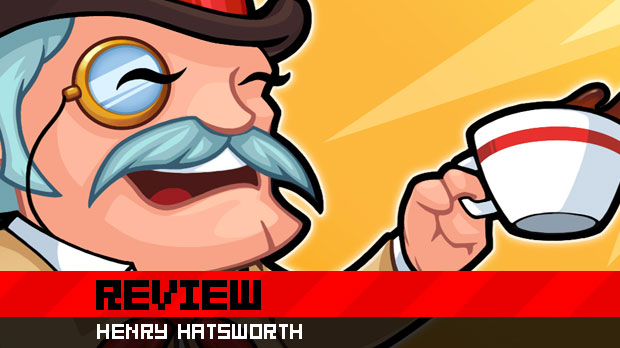 Henry Hatsworth in the Puzzling Adventure is about as improbable as any one thing that can dabble in improbability can be. It’s the story of an English gentleman and adventurer, Henry Hatsworth, who embarks on a quest to find a legendary golden hat. Weasleby — Henry’s nemesis — is also on the trail of the mythical treasure, doing whatever it takes to stop his rival in his tracks.

Along his adventures Henry battles enemies who, once conquered, will fall into a “puzzle realm” where they can only be vanquished by matching like-colored blocks, Panel de Pon-style. Also, Henry can don a robot suit and crush baddies with rockets, lasers, and his heavy mechanical fists. So is it ridiculous? Yes. But is it remarkably entertaining? Absolutely.

Henry Hatsworth is a curious mixture of two genres that traditionally don’t mix — platforming and traditional tile-matching puzzle mechanics. Like peanut butter and bananas or tuna and corn, one wouldn’t expect the combination would lead to a successful marriage. But like the blessed union of color-matching puzzles and role-playing games in Infinite Interactive’s Puzzle Quest series, it works better than you might expect. And the way in which Henry Hatsworth forces players to focus on both the traditional platforming and puzzles is nothing short of brilliant.

The game makes use of both screens on the DS, with the platforming taking place up top and the tile matching going down on the touch screen. As Henry runs, jumps, and swims through levels he’ll encounter enemies whose — once defeated — enter the puzzle realm as a colored block. By tapping X you can then gain control over the lower screen, swapping the tiles horizontally to match like-colors and create chains. The mechanic is not just similar to games like Panel de Pon or Tetris Attack, it is Panel de Pon or Tetris Attack. But in Henry Hatsworth, there’s a clever little twist.

As the sack of blocks rise, it’ll afford the enemy blocks an opportunity to escape the puzzle realm and then return to the real world to aggravate Henry in his adventures. Of course, you don’t want this to happen, so quick matching and keeping them down for good is in your best interest. Additionally, matching enemy blocks and like colors turns them into an energy which is added to a meter on the right side of the screen. This energy can be used in the real world as ammo for Henry’s gun (and later, other weapons like bombs or a boomerang), or a larger chunk can be used to unleash a powerful laser blast. Save up enough energy and you’ll be given the opportunity to tap the bottom screen and enter “Tea Time,” a mode in which Henry first sips some tea before donning a robot suit to wreak havoc on enemies in the real world. 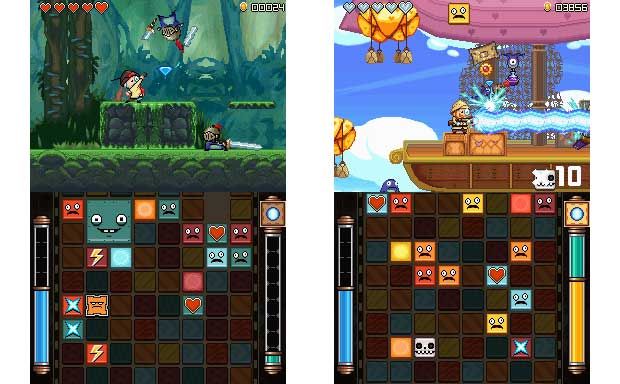 Switching back and forth between realms is not only seamless (real world action pauses when in the puzzle realm), but essential. Maintaining a balance between time spent in both realms is key to success, with power ups (health, area damage, etc.) weaved into the puzzles every now and then. Because the classic match-three mechanic is inherently fun, it never feels like a burden, either; heading into the puzzle realm often seems like a nice break from the platforming action.

The platforming is solid and diverse, with some 30 levels across five worlds, from typical jungles to an ever-changing and tricky-to-navigate puzzle world. You’ll also bump into some wild bosses, like Weasleby in his floating, mechanical hat or even crazier nonsense like a wheelchair-bound old man and his beefy female nurse. Each encounter is crazier than the next, and has its own unique attack patterns, which will have you pushing forward through each level just to see what else Weaselby has up his sleeve.

Early on, Henry Hatsworth almost seems too easy, balancing straightforward platforming with slow-moving bottom-screen block movement. Unfortunately, it’s a trick, as the difficult of the game ramps up significantly and without much warning. By world three you’ll be bombarded with enemies, having to frantically switch back and forth between screens simply to stay alive. Level design and enemy placement also gets a bit cheap, with some enemies placed precariously on small platforms that you’re sometimes forced to jump on and risk a cheap hit. Boss battles also get trying, some of them having the feel of punishing 8-bit-era encounters. 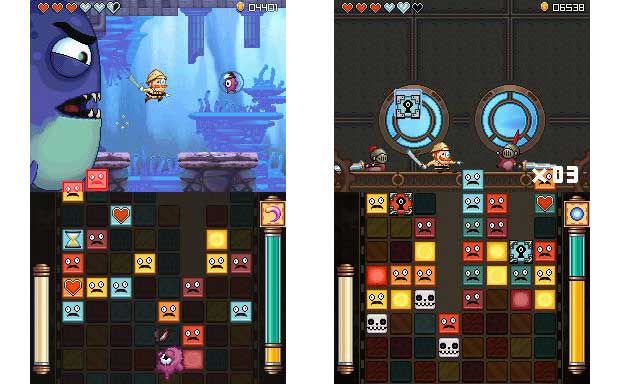 With that said, Henry Hatsworth’s DS adventure truly is a puzzling one. On one hand, the concept screams “casual” — classic platforming, classic color-matching tile puzzles, and a likable, irreverent art-style. Hell, the game’s even published by EA’s casual label. So while it should appeal to casual gamers, the game’s brutal difficultly later in the game may prove too frustrating. On the other hand, more hardcore players may steer clear because of the casual stigma.