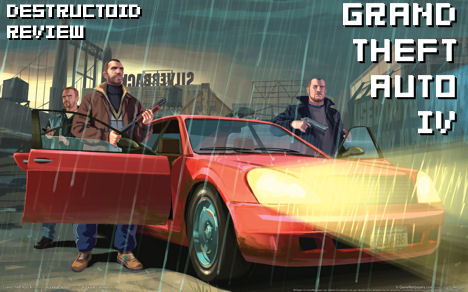 Better late than never, it’s finally here — the Destructoid review for Grand Theft Auto IV. Wanting to give this review our fullest attention, we wanted to make sure we had played enough to feel comfortable in our knowledge of the latest GTA before we attempted a review and give you the most honest, unaffected-by-hype review on the Internet.

Given the vastness of GTA IV, you can see how this might take us some time.

The hype train for Grand Theft Auto IV was a large one, and one that is still continuing to roll. With such high expectations, Rockstar would have had to deliver an opus to avoid disappointing the fans, and continue its long trend of spearheading the sandbox genre.

So, does the current generation rendition of Liberty City meet demand? Have Rockstar truly outdone themselves, or has the series finally cracked under pressure? Join me for the full review after the jump.

It’s inconceivable that you don’t know the story of GTA IV, but if you suffer from short-term memory loss, let’s break it down. You take on the role of Eastern European immigrant Niko Bellic, fresh off the boat and in the “land of opportunity” that is Liberty City. He soon finds that his cousin Roman’s stories of women and riches are embroidered at the very least, and it’s only a matter of time before he settles into the only way of life a GTA character knows — crime, and lots of it.

One of the most noteworthy aspects of Grand Theft Auto IV this time around is the storyline — writers Dan Houser and Rupert Humphries have pulled out all the stops to create the most epic, engaging and above all, humanized Grand Theft Auto story of all. There is a depth here that far surpasses GTA III‘s callous silence, or Vice City‘s merciless tale of psychopath Tommy Vercetti. Niko Bellic is a fully fleshed out character, with a past, a goal, and some actual sympathy.

The game is full of moral dilemmas, with a variety of choices presented throughout that can affect your progression through Liberty City’s criminal underworld. Some of the decisions you have to face can weigh heavily on the player, because unlike other games, there is a true sense of gray here — no stark black-and-white as in other videogames that promise “moral choice.” It has to be said that GTA IV presents more conflicting decisions than BioShock ever did, and you’ll constantly be wondering if you made the right decision, and feeling the affects of your actions.

As far as gameplay goes, GTA IV doesn’t do much to evolve the series beyond the roots established in the last generation. Although rich in detail and with plenty for Niko to do, the reinvented Liberty City is still the same old affair of running around a giant sandbox, completing missions for a variety of criminals and psychopaths, from assassinations to chases and street races. The combat is far from improved, with hand-to-hand fighting a complete waste of space and a dodgy auto-aim system for weapons that only lets you switch targets about 50% of the time. Despite the high ideals and efforts to push forward the sandbox genre, GTA IV is a game marred by outdated mechanics that really should have been improved by now.

That’s not to say the game is unenjoyable — far from it. Once you forgive the poor combat mechanics, there is a lot to love in Liberty City, as most of you reading will fully know by now. Cruising through the New York-inspired surroundings is a joy, and eventually you’ll be having too much fun to care about the fact that cars now slide around like a piece of soap — besides, you’ll get used to that. The missions aren’t overly complex this time around, but there are some utter doozies that will stick with you for a good long while, and plenty of optional sidequests that can be discovered. At its bare bones, Grand Theft Auto IV is really just like any other GTA, but if you happen to like GTA, this isn’t a bad thing.

Fortunately, those bones aren’t bare at all, and it’s the extras that truly make IV stand out from the pack. The city is crammed full of things to do, and in between missions you’ll find there is plenty to stop you from growing bored. You’ll be able to engage in minigames like bowling, darts and QUB3D, go on dates with a variety of women, or just hang out with friends like Roman, Packie or the inimitable Brucie Kibbutz. You could also take in a show, with a cabaret club full of little skits for you to watch, or visit the Split Sides comedy club which features fully motion-captured acts from Catt Williams and Ricky Gervais.

Much of the game is handled through Niko’s phone. You’ll get calls from potential employers, or important text messages, and you can use it yourself to arrange dates/meetings, or open up missions earlier. Later in the game you’ll be able to get even more benefits. The phone is also used to engage in multiplayer matches. While it’s a good idea, I often found the phone a pain to use, especially trying to make an important call in a heated moment. You will also lose the conversation if you’re hit by a car or a fist during a phone conversation, and if you’re interested in the story, this could force you to miss out on some of the experience.

As far as the aforementioned multiplayer goes, Rockstar has certainly given the play a wide variety of options. From simple street races and deathmatches to more involved play modes like “Cops & Robbers,” online aficionados will not find themselves growing bored easily. Personally I’ve experienced horrible lag from it but when I find it working, I must confess there’s a lot of fun to be had. The unrefined gameplay actually makes multiplayer more fun, as skidding cars turn a street race into a chaotic mess of crashes that you probably have no hope of winning, but it doesn’t matter because you’re too busy smashing into other people.

I just wish, however, the multiplayer was far more intuitive. The only way to access it is through your mobile phone in single player, and you can’t truly choose to access it any time because you lose any and all unsaved progress. This really makes the idea of a multiplayer that you can just drop in on at any time a rather moot one. Also, if you choose to leave a game, there’s no real lobby to speak of, so you’ll be thrown back into single player (after a good deal of loading, of course).

GTA IV is far from perfect, but is just so much fun that it barely matters. The Euphoria engine makes interacting with Liberty City’s inhabitants hilarious (the first time one of them grabs the car you just stole is a moment of sheer joy) and the attention to detail is marvelous. A title that makes just watching an in-game television fun has to be worthy of praise, and the satire and wit that has been put into everything from the game’s dialog to its plethora of radio stations (LRR has an ELO song on its playlist!) ensures that Grand Theft Auto IV is consistently entertaining.

As a game, it is flawed in many aspects, but as an immersing experience, GTA IV is simply unparalleled. Its problems cannot and should not be overlooked, but none of them break the game, and there is just so much charm packed into the thing that you can’t stay mad for long. Sure, just clipping a police car and having it turn into a chase that takes you far away from your intended target is an abominable frustration, but soon, like a puppy that’s just shit in your shoes, the game will do something completely adorable to make you put down your beating stick and take it out for a walk.

It’s not a perfect game, but it’s still one of the best damn rides you’ll get from your Xbox 360 or PlayStation 3 this year.