Destroy All Humans was an old favorite of mine back in the PlayStation 2 days. It was rough around the edges, and far from perfect, but it had a sense of humor and the opportunity to play a murderous alien in a Mars Attacks-style world radiated a lot of charm.

Read on as we review Destroy All Humans: Path of the Furon. 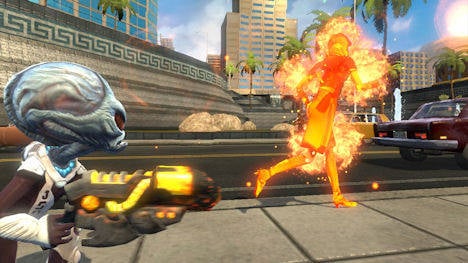 Destroy All Humans: Path of the Furon (Xbox 360 [reviewed], PlayStation 3 [Europe only])
Developed by Sandblast Games
Published by THQ
Released on December 1, 2008 (US)

Path of the Furon picks up a decade after the last game’s primary setting, as Crypto has moved from the fifties and sixties to the seventies. Cue the period-themed gags as Crypto and his holographic commander Pox engage in seedy casino wars, tackle a satirical Hollywood, and enjoy a Japan-themed level that seems to be based upon nothing but stereotyping Asians the way they were stereotyped in 1940s propaganda cartoons.

Perhaps I’m getting too old, but the frequent sex gags and self-referential videogame jokes just aren’t that funny anymore. The witty edge that the original DAH possessed appears forced now, like the writers, if indeed Path of the Furon had any, were trying too hard. Occasionally a smile threatened to appear on my face, but most of the dialog is simply painful to listen to.

This isn’t helped by the fact that fake “dialog trees” make up a huge amount of the game this time around. I call them fake because they’re not really trees, more a process of elimination. Invariably, the game will make you plow through each and every option on its “tree” to move along the unbearable dialog. 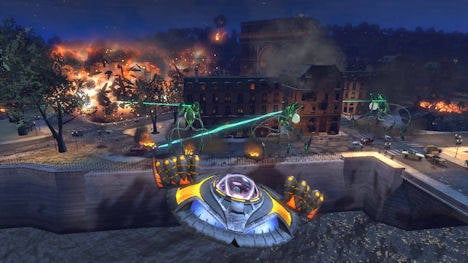 As for the rest of the game, it’s pretty much the same thing we played back in 2005 on the PS2. You are either possessing humans to gain information (which barely qualifies as “gameplay” more than it does “walking for a bit”), blasting generic enemies and civilians on foot or blasting generic buildings in your flying saucer. Unfortunately, what was amusing in 2005 has worn thin by now, where most sandbox games have moved on from assuming that simple destruction is enough to keep a franchise going.

There is nothing inventive about the game’s missions, which wouldn’t be bad if the stuff being regurgitated felt fun to play in the first place. It does not. The once-hilarious range of silly weaponry now feels uninspired and whatever new weaponry there is wears thin after the first five uses. 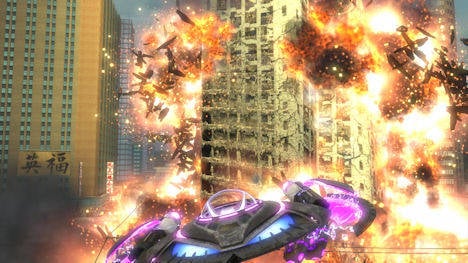 On the subject of new stuff, there isn’t very much, and none of it is really noticeable. Streamlined controls now allow Crypto to fly with his jetpack, fire his weapon and use Psychokinesis at the same time. This is convenient, but not fun. There are also airborne enemies which attempt to make the flying saucer sequences more interesting. They do not.

As far as Crypto’s mental powers are concerned, he has gained the ability to stop time and later on, is able to manipulate objects while frozen and set them up to be flung into the air when time returns to normal. Like everything else, it works as a gameplay mechanic, but there is no thrill of destruction to be gained. It is a functional gameplay tactic — nothing more, nothing less.

As someone who really dug the original Destroy All Humans and looked forward to seeing sequels expand upon the idea, I am incredibly disappointed that developer Sandblast has seemingly done nothing to build upon the foundations laid in 2005. I wish I could find something nice to say about it, but there is nothing satisfying in Path of the Furon. It is as by-the-numbers as you can get, and the whole experience is one of boredom. The developers have done the bare minimum needed to get the game to work, and it appears they simply left it at that. Pretty despicable. 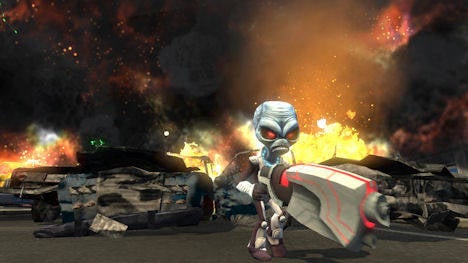 This theme runs through to the graphics, which are just about pulled together to resemble something visual. Honestly, this Xbox 360 title looks barely better than its PS2 predecessors, and are chock-full of graphical glitches, potentially game-breaking clipping issues and frequently disappearing textures. The character animation is frankly disgusting for this day and age. Characters nod at each other for several seconds before a cutscene starts, and will move around just enough to give some semblance that they represent something that might be alive.

Dialog also cuts off with alarming regularity, or sometimes simply won’t happen at all. Even the volume is unstable, with music sometimes playing loudly before becoming almost inaudible. Quite what was going on when the sound and graphics for this game were being developed, I do not know. I simply cannot comprehend how and why games are being made with so many bugs and without even a small modicum of care in this day and age. 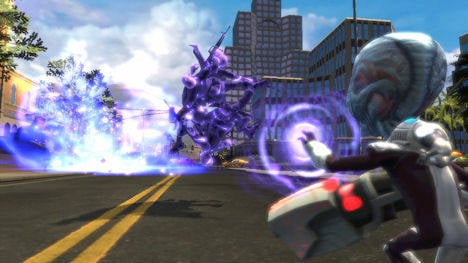 Destroy All Humans is, at best, a mediocre exercise in boredom and at worst, a glitchy mess of incompetent design. It’s lazy, it’s dull and it’s hideous to look at. Clearly rushed out in time for the holidays, you will effectively be abusing a loved one if you give them this as a holiday gift.