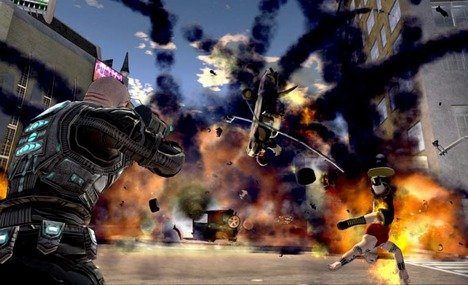 Yes, if you get Crackdown, then you’ll have a very good chance on getting in the Halo 3 beta. But is that the only reason to get this game? Find out what we think after the jump in the latest Destructoid review. Tell us what you think.

I’m going to start this review the same way Crackdown starts, by going right into the action. Hot, gun-toting, car-throwing, roof-hopping, grenade-blasting action. You see, Crackdown is a game that is meant to be played fast and loose, and it shows. It doesn’t waste your time with tutorials or training levels, it grabs you by your super-hero short and curlies and throws you face first into a city of criminals with only one purpose: to kill you.

How you survive this frenetic pace is entirely up to you. Essentially, Crackdown provides you with a well-designed, graphically-stylish and enormous city to use as a super-hero training ground. Since your character already starts off at 11 on the bad-ass scale, leveling him up further not only opens up more of the game, it provides you with a feeling of satisfaction every time you become more powerful.

A satisfaction that can easily be felt the first time you’re able to kill an enemy by throwing a garbage truck at their head. These moments of super-hero joy make you realize that unlike other sandbox games, Crackdown’s only goal is to be fun. A goal the developers have definitely achieved.

Strangely enough, the total focus on fun leads to my only gripe about Crackdown. The story, or more importantly, the complete lack thereof. Now don’t get me wrong, I’m not looking for deep, sweeping narrative. I just expected a little something more than a next-gen version of “thanks for playing, please try again” when I beat all of the bosses. This is just a minor gripe, though. One that is more than made up for by the game’s near-perfect co-op mode. An online experience that adds not only tag team mayhem, but brings an added level of replay value to an already great game. Crackdown, with its pick up and play attitude toward fun, has raised the bar for what to expect from a sandbox-style experience.

First things first: Yes, Crackdown shares many similarities with your favorite hooker-stomping sim, Grand Theft Auto. There is simply no denying that fact, and even the developers acknowledge the similarities (remember when we went to see them? Yeah, they’re pretty up front about it.)

The good news is that instead of the blatant rip-off some people had been fearing, Crackdown is more like Grand Theft Auto’s younger, hotter sister. While GTA has a degree in psychology and a mortgage, Crackdown just graduated high school and has no idea what Rohypnol is. In short, Crackdown is a hell of a lot more fun to spend the evening with (and it won’t call you five times the next day asking what last night meant).

If you’ve played GTA before, you’ll be familiar with the controls, with a few very nice differences. For one, the targeting system in Crackdown is (cement-cracking) leaps and bounds beyond that of GTA. Once you lock on to a target, you can use the system to then target the head, torso, or extremities of your foe for various effects (and that, in and of itself, is dependent on how talented you may be with guns).

The aforementioned skill is raised much like every skill in Crackdown: by using it. The more you shoot people, the better you are at blowing their cocks off. The more you explode people, the better you are at throwing grenades like Peyton Manning on a cocaine binge. The only deviance from this formula is with your agility; you have to climb around the city like some kind of spider person in order to collect bubbles (500 of them) that make you jump higher and run faster.

The only qualms I have with Crackdown regard its sandbox nature. There is a definite feeling of “sameness” to these kinds of games, even one with as many novel twists on the formula as this one. If you’re bored to death of GTA-type games, I would wager you won’t be enthralled by Crackdown. If, however, you’re ready for a new take on a genre that lawyers and politicians have created entire careers over, Crackdown is the new crème de la crème of open-world gaming, and it’s a definite purchase for anyone who owns an Xbox 360.

My greatest fear for Crackdown when it is finally released for mass consumption is that it will forever be known as “the game that got me into the Halo 3 beta.” People, I beg of you, do not think of this title as such. Crackdown is a brilliant addition to the Xbox 360 roster. It’s the kind of game that makes the 360 worth owning simply because it allows the system to offer a style of play that is a refreshing change from the standard serious shooters and other titles available.

But how do I really feel about Crackdown? Well, honestly, I feel like the game was custom made for me. It has RPG elements that I love. It has Pokemon elements that are addicting (the agility and secret orbs make you wanna say, “gotta catch ‘em all!”). And, of course, it has the greatest mix of shooter and sand box that any console will see for some time — unless Rockstar decides to get off their asses and make a targeting system that works.

And for those of you that love those “oh wow” moments, well Crackdown has a ton of them — from setting up explosions to reaching the top of the tallest building and looking at the living city. Even if you get bored, there’s nothing better than to stand on top of a bridge or roof above a busy intersection and shoot the wheels off of passing cars to see how many barrel rolls they do. The other night, a friend and I just stood in one place for about 30 minutes or so shooting out wheels and watching drivers ride on their rims — only because it was hilarious and we could do it.

In a sense, this game is awesome. If you look up awesome in the dictionary, there should be a picture of Crackdown. It’s mindless, has no story, and I could care less. I have a blast while playing this game and you will too, I promise this. It’s actually the first game that makes me want a flood of microtransactions.