Before I begin my review of Bookworm Adventures Volume 2, I have a dirty confession to make. As a games blogger, I know I really should have played every game ever made, but you know, I haven’t. Therefore, I must make the guilty admittance to you that I have never logged even a moment of play time with the original Bookworm Adventures. This equals out to a total failure at life on my part, since I have a feeling it is a very good game.

On the dark side of things, this means I cannot tell you how much better Bookworm Adventures: Volume 2 is in comparison to the original. However, I can tell you that, much like the rest of the PopCap library, it’s a highly addictive title that will in all likelihood drive me back to the first now that I’ve played the second. Wondering if it’s your type of game? Well, hit the jump and I’ll do my best to fill you in.

As a newbie to the Bookworm Adventures franchise, the first thing that jumped out at me about Volume 2 is that the formula reminded me a bit of Puzzle Quest. Anyone who knows how addicted I was to that game will interpret this as a good thing. In the game you take on the role of Lex the bookworm, who will battle his way through multiple fantasy worlds in the game’s Adventure Mode by spelling strategically to beat enemies. 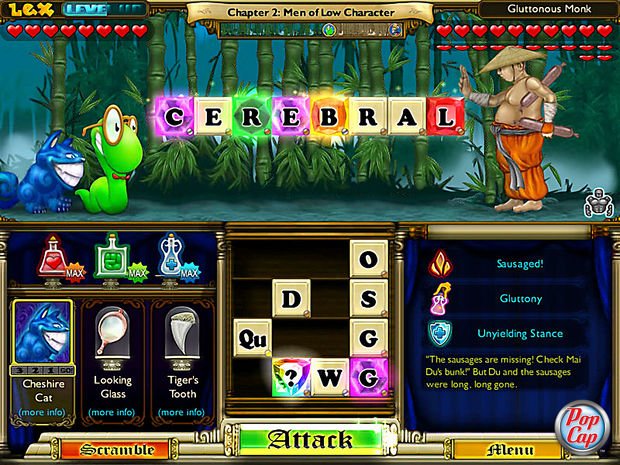 The game consists of three separate worlds boasting ten levels each: Fractured Fairytales, The Monkey King and Astounding Planet. As you may recall, each of these chapters will be available later down the line as separately downloadable content. Pricing has not been announced just yet, but the amount of content you get with the complete game is tremendous as usual. If you don’t have a lot of spare time, you could save your cash for when the individual chapters are released, but as a single package the full PC download really does offer a bang for your buck.

As you can see from the screenshot above, the adventure mixes the questlike feel of Lex facing off against enemy battles with a word scramble. The longer the words you spell, the greater damage will be dealt to your opponent. You also acquire friends throughout the game, such as Mother Goose and the Cheshire Cat (six in all), who will have handy skills to lend like amping your potion inventory and purifying Lex’s status ailments.

You’ll also have items to manage, but PopCap keeps it fairly simple and fun. The red potion heals you, while the green powers you up and the white clears the board of cursed blocks and cleans up status afflictions. As you progress, you’ll earn other types of special items that you can choose before starting a level to carry with you. Two of my favorites were the Just Right Porridge, which helps Lex to resist stun attacks, and the Eat Me Drink Me, which amps up potion drops. 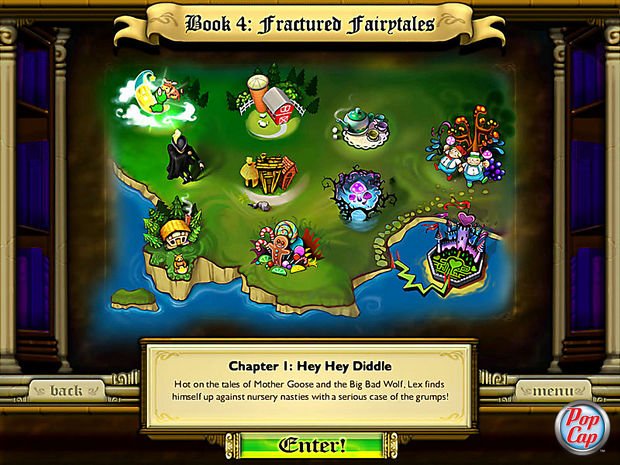 While you can blast through the game itself without paying too much attention to the details, as usual PopCap really shines in the humor of the text. For instance, each opponent has a little blurb below them that often gave me a chuckle, and the loading screen even crams wit in for the few seconds you have to stare at it.

Things aren’t too difficult through the first level, but by the time you get to Fractured Fairytales, you’ll find yourself needing to take more time to look at the board and challenging yourself to find the longest words you can. It’s at this point that you’ll need to use the Rainbow Tiles on the board to your advantage. These appear randomly (although more often if you spell longer words). They have handy little effects like healing a few of your hearts and increasing your damage, and if you use them with a longer word you can really pack a punch against your enemy. In addition, if you finish an enemy off with a nice long word, you have the opportunity to “whomp” them, which is satisfying in much the same way that it is in Peggle when you finish the level and all that ridiculous singing begins.

There’s a little special area that also pops up around the middle of the first level. Within it are four spelling minigames (and you’ll get more unlocked later) that allow you to earn extra items for use in the main levels. If you die in a level, you’ll be allowed to go to this special area to try your hand at getting some goodies before you try again, and then the area vanishes again until the next time you die a horrible death. 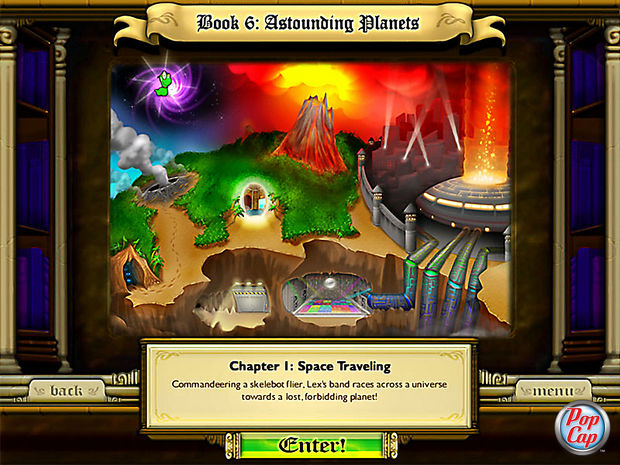 After completing Fractured Fairytales, you’ll also unlock the Tome of Knowledge, better known as the bestiary. You can there to read all the details on each villain, as well as what level they appeared in and what classic story their appearance was inspired by. Hang in there and clear Adventure Mode entirely, and you can either replay it to earn more badges, head over the the Arena to fight the game’s bosses with the added pressure of needing to spell faster than they do, or play all the Minigames to your heart’s content.

While Bookworm Adventures 2 doesn’t appear to offer anything startlingly new or different, it does stick by the formula that PopCap seems to have down to a science. The game is high quality and a lot of fun to play, and the only negative thing I can really say about it is that if you don’t care for word games, it probably won’t appeal to you, but if you do, there’s many hours of gaming bliss waiting for you in Lex’s study

Score: 9.0 – Superb (9s are a hallmark of excellence. There may be flaws, but they are negligible and won’t cause massive damage to what is a supreme title.)