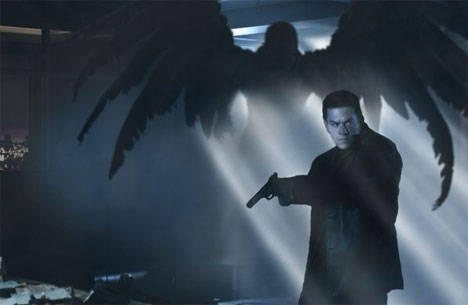 Max Payne (the game) has a deep plot about drugs and crime, themes of loss and revenge, a some what subtle background in Norse mythology, and gunfights — lots and lots of slow motion, totally awesome gunfights.

Max Payne (the movie) has a plot about government super-soldiers, no apparent themes whatsoever, a complete and total lack of subtlety about its Norse mythological influences, and two — count them — two, gunfights. Fine maybe its two and a half gunfights, but that still makes Max Payne a terrible movie, and an insult to a game that was wonderfully melodramatic and — I can’t stress this enough — full of gunfights.

But for now lets pretend that the lack of gunfights in the movie (seriously, there’s only one slow motion bullet time shot) isn’t a problem, and take a quick look at how the movie butchers the game’s story and themes. 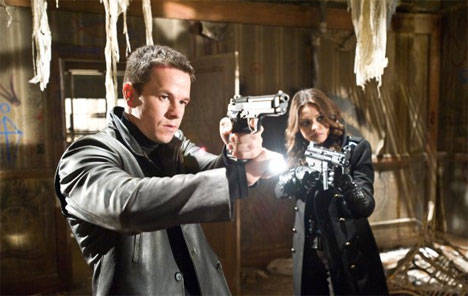 In the film, detective Max Payne’s (Mark Wahlberg) wife and daughter are killed by some junkies who are high on a new drug called Valkyr. So far, so good. Max then takes a job working behind a desk in the cold case department so he can continue to work on his wife’s case on his own, and catch the killer that got away.

Flash forward three years — he’s finally putting the pieces together on the case, and is driven by his thirst for revenge to find the killer. If the story went straight from here, and had some frickin’ gunfights in it, everything would have been fine. Even director John Moore was managing to capture some of the feeling from the comic-paneled plot of the game during the beginning of the film. In fact, ten minutes in I had some high hopes for the movie.

But it doesn’t go straight from there. Instead, like a drunk person trying to play Mario Kart Wii, it careens around wildly, desperately searching for a story in all the wrong places. First it finds the Norse mythology, which was a running theme in the background of the entire game. Then, instead of placing this interesting mythological theme in the background of the film and trusting the audience’s intelligence, Moore has made the hinted at myth a full blown reality of sorts.

One step away from basically making Max Payne a story about a man fighting winged demons, the filmmakers make the Valkyr give its user hallucinations of winged Valkyries coming to get them. Dumbing the film and its story down even more, Moore decides that the audience should really be able to see these Valkyries, completely destroying any subtlety or intelligence that the film could have had. As if shoving the audiences faces in the mythological aspects of the story — which, by the way, don’t really matter within the context of the film — weren’t enough, the story hits a brick wall of stupid which is held together by the cement of idiocy when it turns Max’s search for revenge into a government conspiracy. 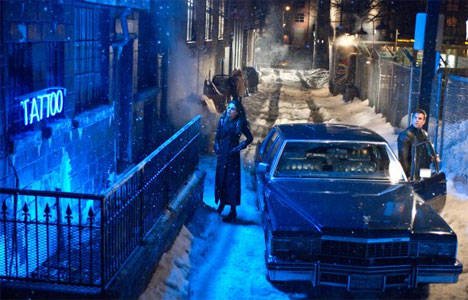 The overtones of loss and hatred now completely and totally derailed the movie flails along to its inevitable conclusion and its predictable twist. Of course these complaints would have been totally and completely voided if the movie had been full of mother f-ing gun fights! I didn’t even want Max Payne to be that deep and interesting I just wanted to see stuff get shot in awesome ways. It doesn’t happen.

As far as acting goes, the only beacon of light in the film is Wahlberg, who was perfectly cast as Payne, and seems to actually get the whole over-the-top, melodramatic nature of the game’s presentation. Unfortunately, no one else did, and about halfway through the movie you get the feeling that Wahlberg has really stopped caring about the character. Then again why would anyone care when Mila Kunis, who plays a Russian mobster who helps Max out, is standing across from you in every scene, reminding you of the film’s horrible casting. Kunis is about as far from a bad ass female as they come, and scenes with her in them are just painfully awkward.

Then again, scenes with anyone but Wahlberg are pretty damn annoying. Scratch that, every scene is annoying because they aren’t gunfights. Did anyone play the damn game? It was about gunfights! What really grinds my gears about the whole thing is that people will credit the movie’s shallowness and lack of creativity to the fact that it is based on a videogame, when in reality the game is anything but shallow, and is still one of the most creative games to ever be released. 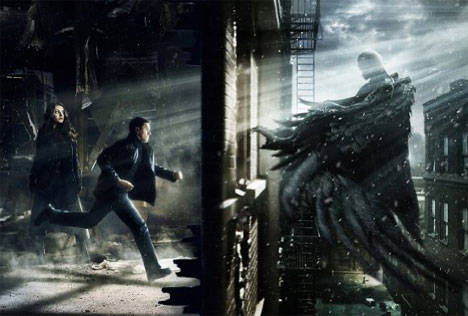 Does anyone else remember the dream sequence with the crying baby and the rivers of blood? Had that been in a film it would have been heralded as a brilliant piece surrealist filmmaking; but since it’s in a game, it’s simply another level with no one talking about the artistic merits of it, despite the obvious jarring direction it took in a game about shooting people. Max Payne (the game) has more artistic value crammed into its opening sequence than Max Payne (the movie) has in it’s entirety, but I bet you no one is going to give it any credit when it comes time to release the reviews.

But I digress — I’ve jumped off the Review Train and boarded the Angry Gamer Express. It all really doesn’t matter. What does matter is that a game that was designed around diving sideways through the air whilst shooting two guns at once now has a movie designed around Mark Wahlberg furrowing his brow and seeing giant, winged angels. If anyone can tell me when replacing the former with the latter became a good idea I’d be please to know.

I’ll be over here watching The Matrix and John Woo films, and wondering what went so horribly wrong with Max Payne that the filmmakers decided to NOT HAVE ANY GUNFIGHTS!

Matthew “Cowzilla3” Razak is a film critic with the Washington DC section of Examiner.com where he writes reviews weekly.