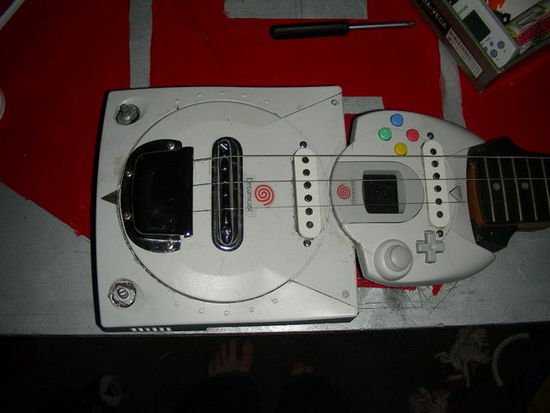 Destructoid is a magical place where all kinds of crazy and interesting people seem to converge. One such magical person is Flooky. She did something most gamers would never think to do with their broken system. She transformed it into a freaking guitar.

Hit the jump for the interview where we ask her why she made it, how she almost melted her thumb off, and what’s next on her instrument/console science experiments.

Destructoid: It’s great to talk to you Flooky. Before I start with the questions, please introduce yourself to the Destructoid community.

Flooky: I’m Leah Pearson, a.k.a Flooky. I’m 18-years-old and just started on Dtoids about a month ago. I am the God of Tetris and dream in Virtual Boy vision.

So the most important question to ask first is, why did you make a Dreamcast guitar?

Well I had a $20 guitar from Good Will sitting on my wall and my Dreamcast broken beyond repair. So I had a crazy idea to put the 2 together!

How long did it take for you to make it?

Do you often fuse different items together like a made scientist?

I attempted one time in the past but it went down the shitter. I tried to do the whole iPod Shuffle in the NES controller mod.

What happened to that?

Ended up destroying the Shuffle and the circuit board of the controller.

So then this was your first real success story. Did any problems arise when making the Dreamcast guitar?

Yes it was but as for the problems, I did melt part of the console with a soldering iron and had to take a piece of plastic that I took off from another part and melt it in the spot were I burned it. Then I had to file it down so it looked inconspicuous. Oh yes, I also burned my poor thumb (Thankfully, that’s healing up nicely). Other than that, the whole thing was smooth sailing.

What was the first song you played on it?

“Smoke on the Water” by Deep Purple.

How did the Dreamcast break? What were your favorite games on the system?

I bought it second hand and it stopped reading discs after awhile. I only had 2 games for it: Tony Hawk Pro Skater and Wetrix. I’d have to pick Wetrix if I had to pick 1 of the 2.

Have you ever seen the SEGA Genesis guitar?

I saw it after I made the Dreamcast guitar. People were saying that I stole the idea from him but I never saw it until after I made my guitar.

Do you have any plans on selling the guitar?

If the right amount of money was offered, I’d consider it.

So do you plan on making any other videogame instruments? Maybe a Super Nintendo Saxophone? Or perhaps a PlayStation 3 flute?

Haha, well I may but I’m tight on money to buy the console and instrument.

If you had the money, what would make next?

An N64 violin. It has a nice curvature for a chin like a violin.

Indeed you are. Any parting words for the readers Flooky?
Drink your milk, brush your teeth, and don’t forget to change your underwear.

[Editor’s note: Expect a video of the Dreamcast guitar in action soon. Special thanks to .tiff for some of the questions.]