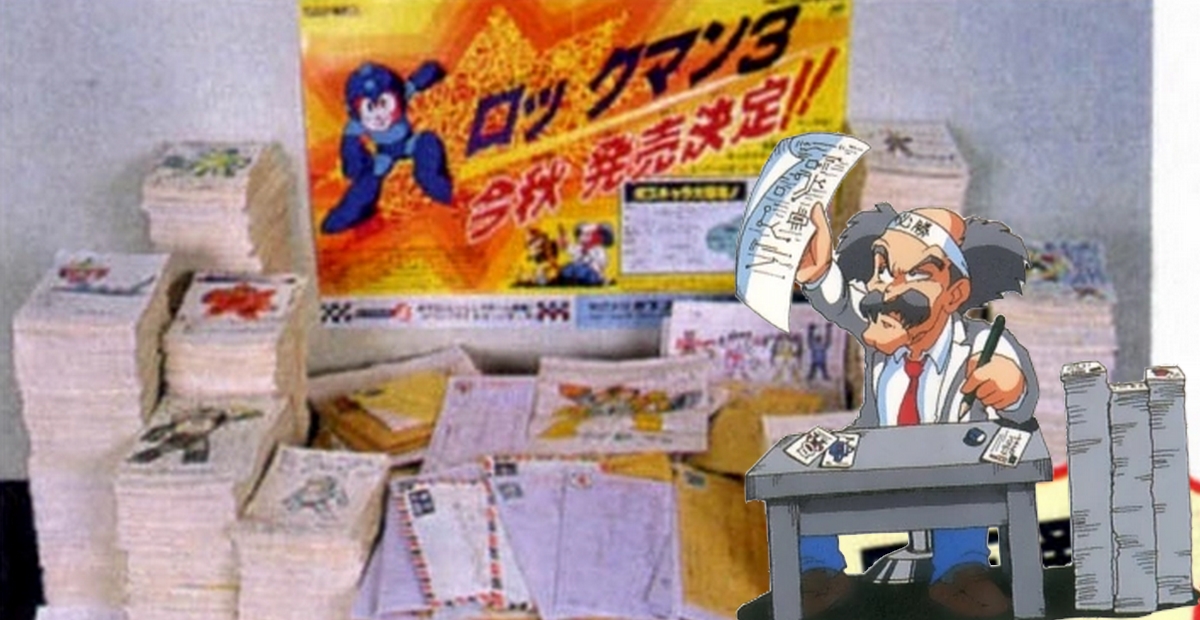 The missing piece… The Robot Masters to surpass Metal Gear

Did you know that in the classic Mega Man series, every entry except the first, 9, and 10 had boss design contests that ended up shaping the Robot Masters that were used in each game? It’s true! And so, in honor of the recent releases of Mega Man Legacy Collection and Mega Man Legacy Collection 2, I figured it would be interesting to ask the Destructoid Community to try this exercise for this special edition of Destructoid Draws.

Feeling inspired? Feel free to drop your own creations in the comments down below. I’m sure Dr. Wily would appreciate any and all help.

“So, here’s my concept: Net Man! He’s a blast from the past with the power of (dial-up) internet. In addition to doing damage, his internet trial CDs slow Megaman down (and pixelize him if it’s not an 8-bit game already). Naturally defeating him and taking his power lets you throw CDs too, but they’re better at slowing enemies down than damaging them.”

“Bat Man is a robot shaped like a giant baseball bat. He flies around the stage and drops baseball bombs on you, only to come down to try and catch Mega Man’s iconic lemon projectiles. If he does that, he regains health, so don’t shoot him in the glove unless you’ve got another weapon.

This wooden monstrosity has a lot going for him, that’s for sure, but piercing weapons should cut that smug grin right off his lazily drawn his face.

The B is silent.“

“He has Bunsen burners on its front, shoots deadly hot loops and needles and is able to cut and section opponents for closer examination. Under microscopic view, structures not visible to the naked eye can be observed.”

“Jet Albatross is inspired by Mega Man X‘s Mavericks. It was originally called Demon Albatross, but I felt like Jet was more fitting.”

“His powers are crying and wishing he could kill Mega Man. He’s basically just a representation of Wily’s mental state. This is the robot Wily would make now after failing to destroy Mega Man so many times.“

“IT SHOULD BE OBVIOUS WHO I AM.

“Originally created to open and close itself whenever needed with its A.I., this robot was corrupted by a virus and now slams shut just as people are walking through, causing them to smack face first into it and spill their coffee. This rogue bot must be stopped!”

“This totally original character is able to constantly move horizontally, but his weakness is not being able to jump. After being defeated by a plumber, Goomba Man was able to meet a master that gave him the power of… well… not being hurt when someone jumps on his head.”

“This one is a bit special for me. You know how you end up doing a lot of stupid stuff you end up regretting when you’re young? Well, I’m no exception. There was this Web 1.0 website where a couple of people were trying to one-up each other with ideas for superheroes and super villains that could defeat the previous one. Young me really, really wanted to see Jesus appear and be defeated. So I suggested it, like three times in comment sections, and ended up being made fun of by the people in charge of the website in the comment section. At least, that’s how I remember it going, it was so long ago.

Anyway, at the most random of times I think back on this. Just a random regret. I’ll go wow, that sure was cringe of me. And then I’ll feel bad for a few minutes. So having a good reason to make Jesus Man happen is my way of moving forward, I suppose.

Jesus Man is an optional boss fight and he’s ridiculously strong and he can defeat Goku and Saitama at once and he gets new Nintendo hardware before anyone else and is an incredibly gentle lover.”

So… When you beat him, do you get a second gun? Dual pistols in Mega Man sounds rad.

“Sandwich Man doesn’t really have a “power” per se. He mostly just insists he’s a sandwich and annoys people. He does have a mustard cannon, but that’s not very effective.

When beat you get the Sandwich Shout, where Mega Man gains the ability to make enemies flee. Unfortunately, it sometimes backfires and makes enemies more aggressive.”

“An amalgamation of the bleeding edge of hip intra-culture and the foppish display of juvenescence, Millennial Man is borne of the undying need to whittle the juiciest philosopho-psych eval down to the sleek modicum of a byte-size social media piece. He is the voice of the everywhere, the style of every season, and the reason counter-culture CEOs salivate at tables hewn of onyx and awash with merlot.

“Ocean Man has three attacks. With his first move (seen illustrated) Ocean Man sends punches forward. Tentacles extend from his arms towards Mega Man in a straight line. Ocean Man can also use his bubble jet to propel himself towards the top of the screen, then he’ll spin in the water causing a whirlpool to form and careen toward Mega Man. With his third attack, Ocean Man will open his mouth and send a fish-shaped missile flying towards Mega Man. The fish will follow Mega Man around until it hits a wall, Ocean Man, or after a period of time.”

That’s it for this edition of Destructoid Draws! In which order would you tackle these (mostly) fearsome foes?