Summer is ending and the storm of Triple-As will begin anew. One of the first installment this Fall would be Destiny 2 – which is finally arriving on the PC – though at a slightly delayed release date of October 24, 2017. (Whereas console bros will get a worldwide release date of September 6, 2017).

The savings grace is that given the game is releasing so soon, PC gamers can get a taste of the game in the upcoming Open Beta running from August 29 to August 31 – and even better as an added bonus, for those dead set on grabbing Destiny 2 on release week, pre-order now grants you one day early access Open Beta on August 28 – Monday next week.

In fact, pre-load for Open Beta has already begun as of writing.

Like all PC big release beforehand, pre-order grants you additional incentives such as discounts and weapon bonus. Depending on your region, you can save as much as 14% off when you pre-order Destiny 2 this weekend.

All deals above are Battle.net key, which as you know, Destiny 2 is NOT coming to Steam. It’s a reasonable decision given Activision doesn’t really need to share their revenue with Valve (who only prints money these days instead of making games).

For those wondering, yes the game is region locked, so the copy being sold at GamesPlanet is available only to UK/EU gamers, whereas GMG has Battle.net keys for US gamers.

Pre-Order Bonuses for Destiny 2 on PC

Besides the aforementioned 24 hour early access to next week’s Open Beta, you’ll also receive the Coldheart rifle, an exotic weapon. Here’s the over-the-top description from marketing: 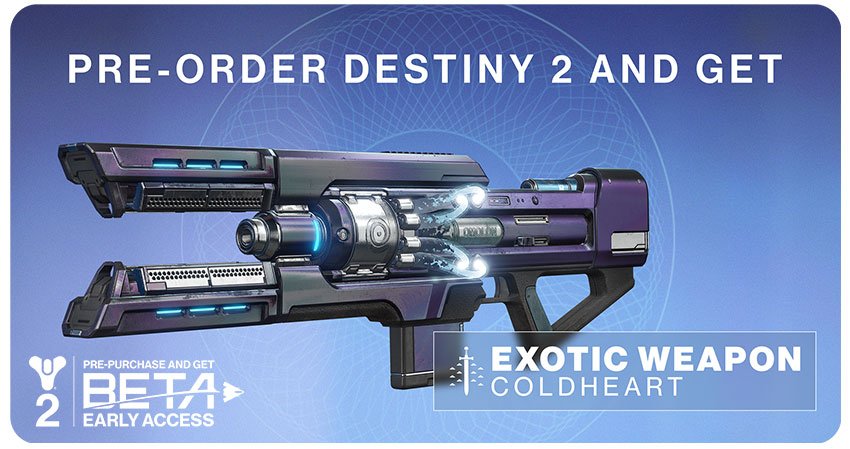 Both Green Man Gaming and GamesPlanet offers the pricier Digital Deluxe Edition, which essentially gets you the eventual Expansion Pass along with the added bonus of “premium digital content” this includes a legendary sword, legendary player emote (ooh), and a Cabal Empire themed emblem (ahh).

Destiny 2 launches on the PC on October 24, 2017 – a 46 days delay which was announced back during June earlier this Summer.