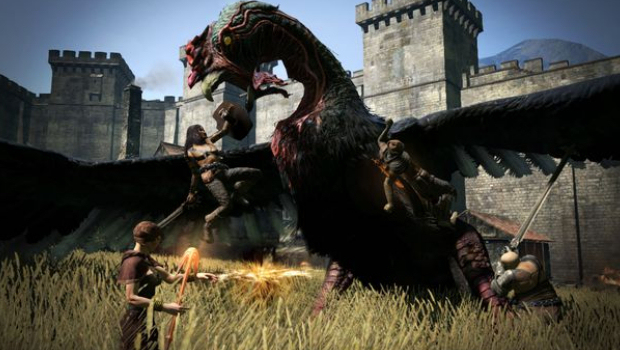 I’ve had a good feeling about Dragon’s Dogma ever since it was announced, and the recently released demo gives me no cause to revoke that feeling as of yet. While very chaotic, and sometimes a little hard to follow the sheer mass of on-screen information, Dogma‘s sense of scale and pompous grandeur is entertainingly exhilarating.

Armed with bows, blades, and a cadre of CPU-controlled pawns that can hold enemies in place, back you up with spells, or just join in the attack, players are armed to the teeth with an arsenal that decimates huge mythical creatures. By far the best part is downing a winged creature with arrows, grabbing hold of it while it’s grounded, and slashing it in the head as it takes to the air. This game lets you grab onto a Griffon’s head and stab it in the sky … and that’s pretty awesome.

The demo gives you two short quests, each with two big monsters — a griffon and a chimera — to tackle. You can also fiddle with the character generation for your main character and your lead pawn. It’s pretty robust, making use of pre-sets but providing enough options for you to get the character you’re looking for.

So far, it’s looking pretty good for Dragon’s Dogma. It seems to be one of those rare games where the overused word “epic” might actually mean something. I also love the idea of the pawn system, and how you can summon all sorts of different allies, who can grow stronger. Feels a bit like Pokemon. A blood-soaked, medieval Pokemon. I like that.

The demo’s on Xbox Live right now and should be on PSN this afternoon, if it’s not already available. Be sure to read Dale North’s full preview, too!