Dead Space may be my favorite new IP of this generation. I love its story, its universe, and its stylish delivery of science fiction horror that draws from two of my favorite movies of all time, Aliens and Event Horizon. That said, Dead Space 3 was a little worrying.

Electronic Arts has made no secret of its desire to homogenize everything it owns, operating under the assumption that a market leader is created by following rather than leading. Dead Space 3 seemed to be the culimination of that, shedding more horror elements to add cover shooting and cooperative gameplay. Like I said, worrying.

Worrying, but no proof that, homogenized or not, Dead Space 3 would be a bad game. I was prepared for the game to not be exactly what I wanted, but trusted Visceral enough to believe it would still be good. A quality game is a quality game, regardless of its conformity to my exact specifications. 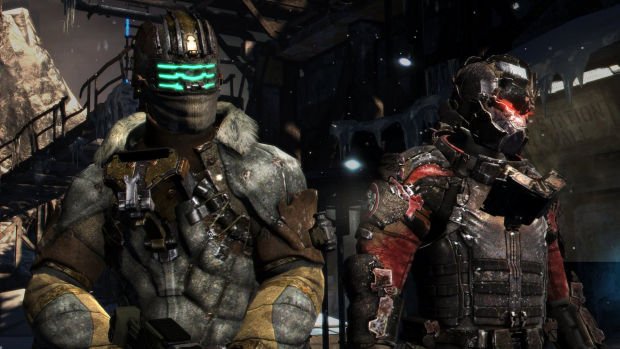 The demo can be used to experience both the single-player and the drop-in/drop-out co-op, though the campaigns are largely identical. Co-op is mostly the same campaign with another player present, Isaac and The Other Guy offering up banter that feels just a little bit forced. Naturally, of course, I tried the single-player first.

Played solo, Dead Space 3 retains much of the atmosphere of the series, which I appreciate. The usual cavalcade of jump scares are in place, and the snowy ice planet of Tau Volantis is actually pretty oppressive in its own right, not to mention offering the kind of wider and open atmospheres that I felt were missed out on with Dead Space 2‘s Sprawl. The Necromorphs featured in the demo are more humanoid than usual, at least while their bodies are intact, but while I expected that to be a letdown, they feel surprisingly creepier this time around. Something about screaming monsters with parkas and icepicks is disturbing — who knew?

For the most part, Dead Space‘s action hits the right notes, striking the expected balance of limb-shredding fun and claustrophobic panic. This only serves to make the new cover-based shooting sections stick out like a sore thumb, however. Throughout the demo are brief situations pitting Isaac against humans, or human corpses with parasitic Necro-heads, armed with automatic firearms. The sudden switch into this fresh style is rather jarring and Dead Space‘s heavy, ponderous controls just don’t feel well adjusted to ranged combat. As a result, these sections come off as haphazardly stitched onto the “real” game rather than seamlessly integrated, something I hope won’t grow into too big an issue with the full experience.

One new addition I do love, however, is the weapon crafting system. By picking up various weapon parts, Isaac can use crafting benches to create his own custom arsenal. Utilizing the items provided in the demo, I was able to quickly and easily build a lobber of electric bolas that inflicted stasis on enemies, and came attached with a separate carbine rifle. Yes, it was empowering, and yes, it ran the risk of reducing a lot of tension by being so damn awesome … but the fact remains that it was damn awesome.

Not to mention, this was built from parts pre-loaded into the demo, and I dare say it’ll take some work to get the pieces together in the full game.

I have a feeling Dead Space 3 will be better played solo, as I can’t say I found co-op offered much of interest. The ability to revive a downed partner and share in the aggression of enemies does a lot to cripple the sense of overwhelming tension that has always made Dead Space so attractive to me. For those that don’t want tension, I’m sure this mode will prove a good compromise. For me, I found it really quite altered the focus of the experience, and in a way that I felt was detrimental.

Fortunately, it doesn’t seem that ignoring co-op will miss too much. While it’s true that the interaction with another character provides a different take on the story, it’s still, at heart, the same campaign. Unlike something like, say, Resident Evil 6, the co-op doesn’t feel so oppressive, choosing as it does to not shoehorn a CPU-controlled sidekick, intent on getting in the way. I can appreciate that.

Overall, the demo gave me a lot to be excited about, with a couple of elements I’m not yet a fan of. I can happily live with that, and I’m as excited as I think I could be for the full game. Let’s have it!