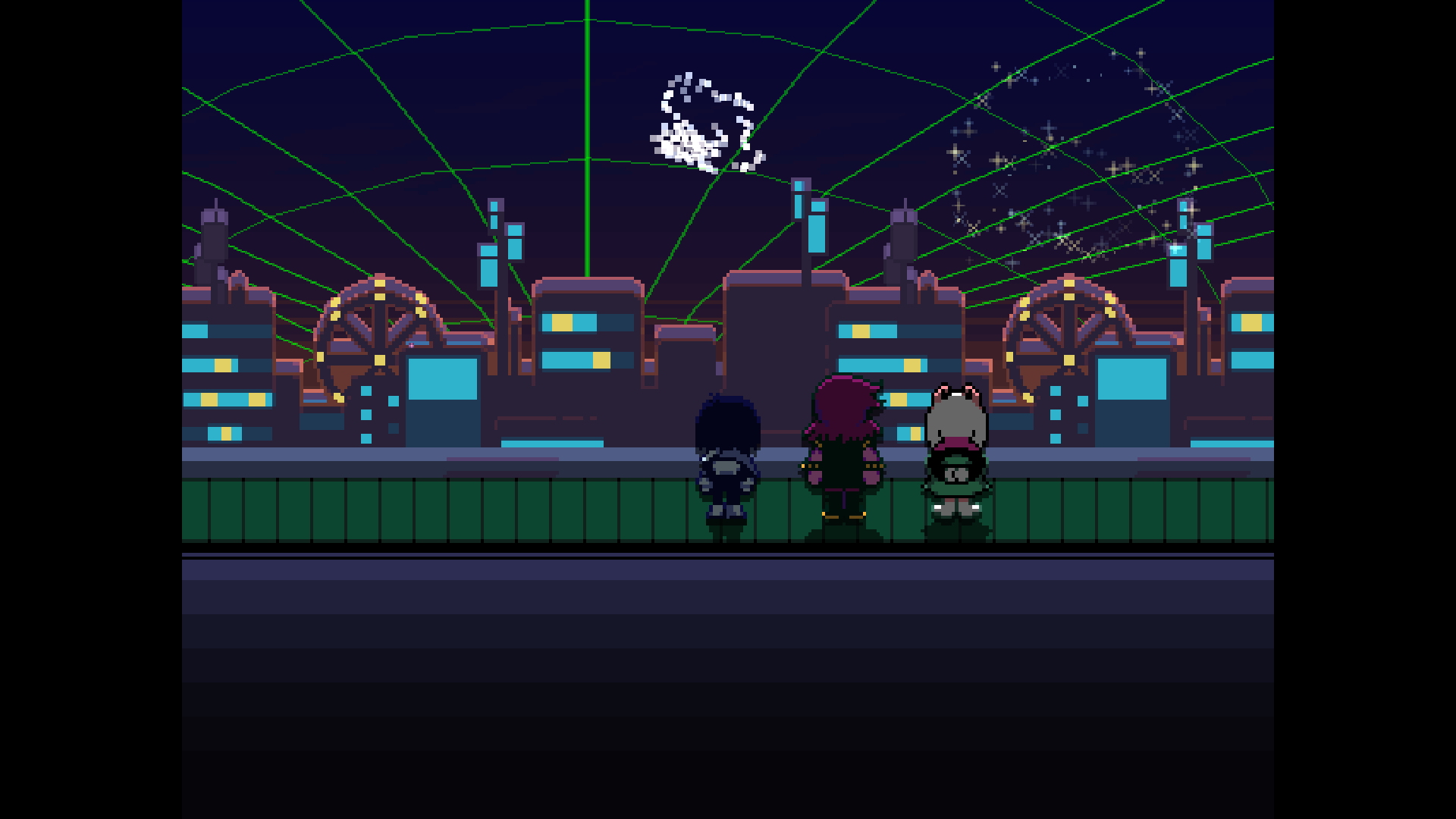 The newest entry in the Deltarune series dropped with only a little heads-up last week. It was a huge moment for fans of Undertale, myself among them, to see what developer Toby Fox and the crew have in store for Deltarune, the linked-but-separate follow-up to an RPG that took the internet by storm.

Deltarune Chapter 2 is out, freely available, and really quite good. It’s a solid RPG with lots of charm, beautiful music, and clever reworking of battle systems and settings to keep the player constantly adapting over its modest runtime. It continues to build on what was introduced in Deltarune‘s first chapter, including the party-based battle system and its narrative hooks around Susie, Ralsei, and the rest of the cast, while retaining the effusive quirkiness of its world and gorgeous throwback-styled art you’d expect from Toby Fox. 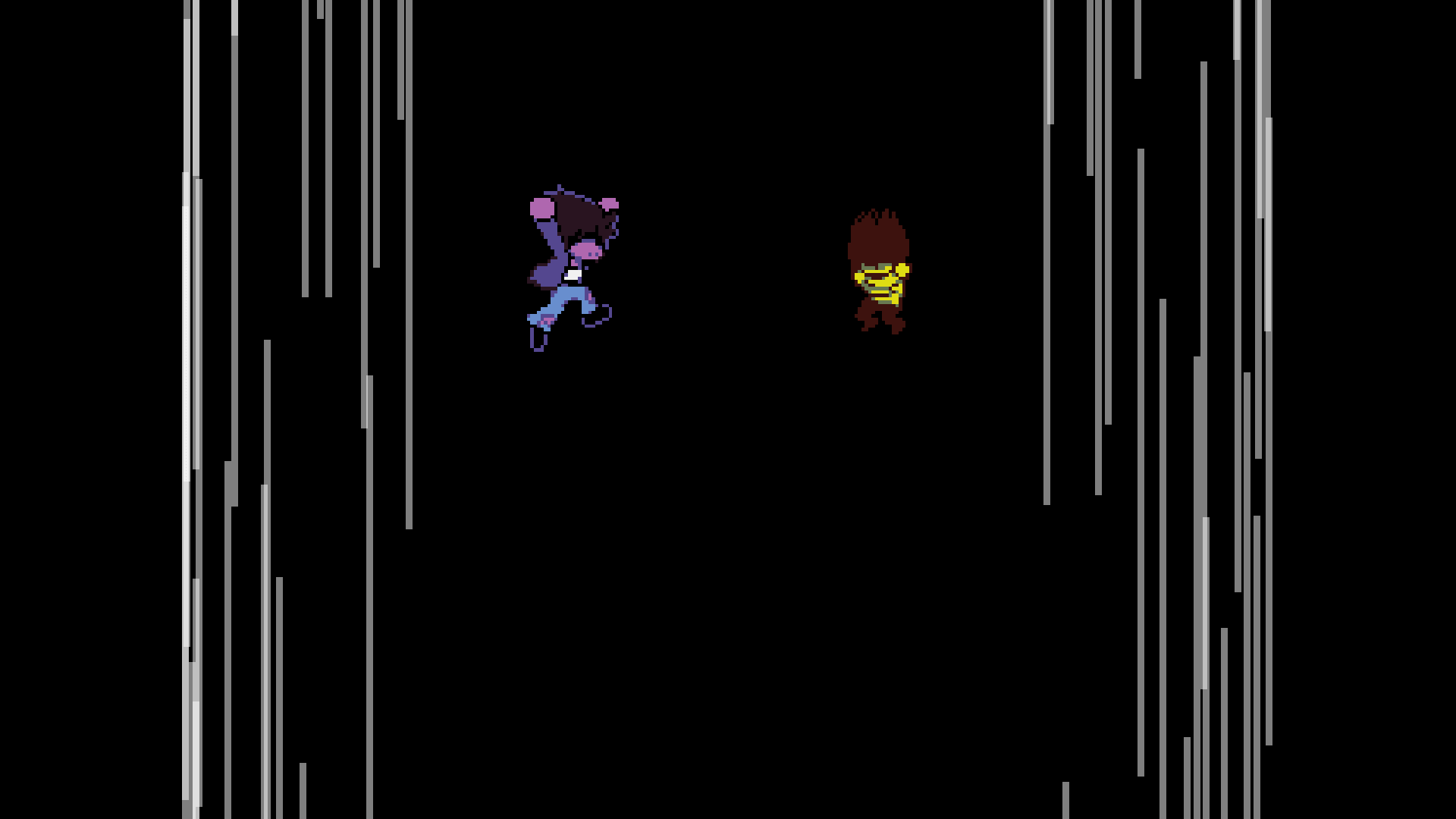 But what’s really grabbed me about Deltarune‘s second chapter isn’t just what it carries forward from Undertale or even the first chapter of Deltarune. It’s where it sets itself apart, through what those differences mean to the game and its themes as a whole. Deltarune Chapter 2 feels like it isn’t just working with new ideas, but actively exploring them in ways that have me really excited for the chapters ahead.

Deltarune was, at some level, always going to wrestle with the titanic shadow of its predecessor. Undertale was a phenomenon, on a scale that’s not easy to understate. YouTuber Super Eyepatch Wolf looked into the depths of just how many fan fictions, alt-universes, and fandoms grew out of the 2015 RPG, and unless you’re already involved in them, I don’t think you’re ready for the scale of it.

And Deltarune doesn’t really ignore Undertale, either. Many, many characters from that game are in the world of Deltarune, either as cameo NPCs or even playing a fairly significant role in the story, like Toriel and Alphys. They’re different, and the question of how and why is no doubt of interest to people who love to dive deep into Undertale lore and theories.

The second chapter of Deltarune keeps some of that alive, but it also lays out a promising vision of what’s to come with future chapters. It’s inventive, clever, twisting upon its own conventions, and most of all, establishes its own storyline that isn’t totally separate from Undertale, but is able to stand on its own feet as well.

A lot of this feeling comes from how the battle system continues to evolve over the course of Deltarune Chapter 2. For most of the first chapter, it felt like an interesting twist on Undertale‘s formula: dodging attacks from enemies in bullet-hell settings, and then using various actions to pacify enemies, or keep party member Susie from attacking them. (If you’re playing a non-violent route, of course. If not, then I suppose you just swing away.) 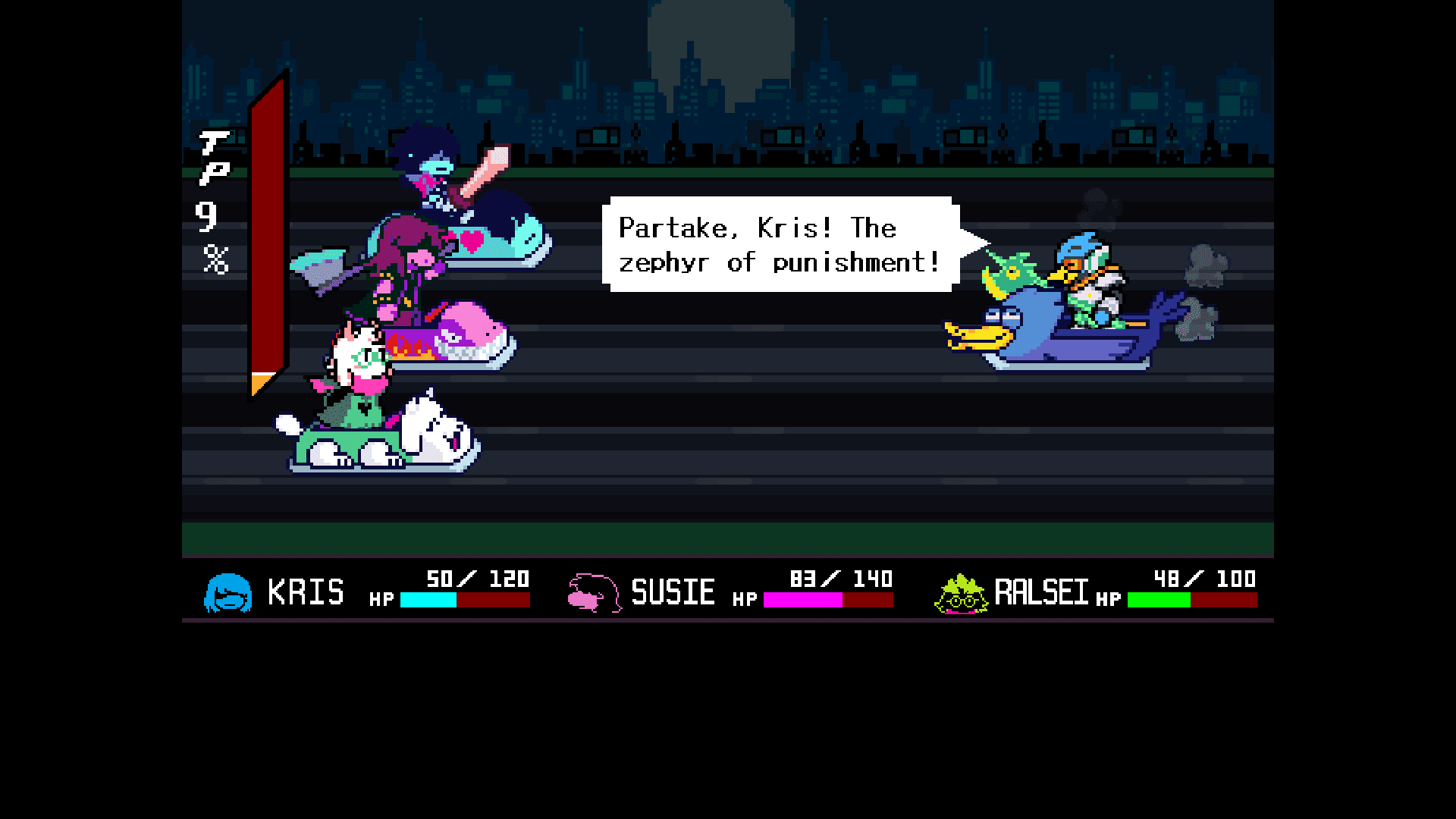 Deltarune Chapter 2 dives further into those in-party interactions, and this time not only through in-fighting and friction, but the camaraderie you’ve formed. One of my favorite ways to spare an enemy involved heating and cooling them all to the same color, identified by the shifting colors of their fancy suits. Each character can heat or cool, so it becomes all about working together to get the right enemies to the right shade. While player-character Kris is the primary user of the ACT command prior to Chapter 2, both Ralsei and Susie learn to ACT (somewhat) on their own here, and the crew has plenty of team-up ACT options as well.

The party unity is really felt in moments where these characters interact with each other in battle. One early Spare option involves either jostling a wire until it comes loose off the face of an enemy, or alternatively, Susie throwing Kris like a javelin to snip the cord. It’s a little moment that feels ripped from the annals of the Mario and Luigi RPG series or Paper Mario, and it works incredibly well. Moments like when the crew decides to deliver some TLC and dresses up like hospital staff, to attend to the “patients” (enemies), really sell the newfound unity between the three core party members. 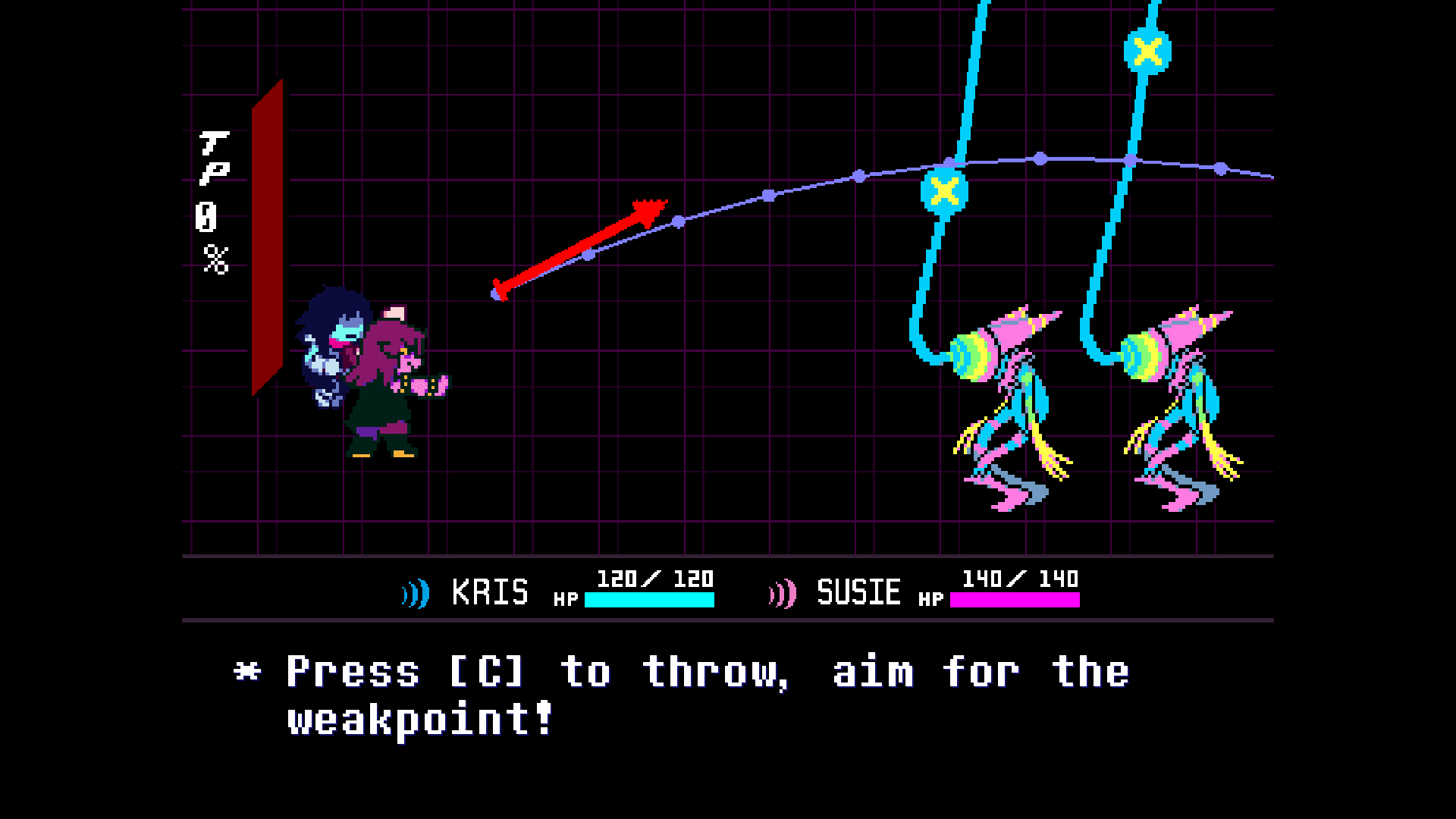 Undertale wasn’t a stranger to unique battles with their own mechanics either, though Deltarune Chapter 2‘s seem to escalate things even further. I mean, there are multiple Punch-Out!!-style fights in here. One boss battle takes place on a roller coaster, as you play bumper cars with your opponent. And some of the optional, hidden fights have fun rehashing of old Undertale mechanics.

And then there’s Noelle, a newcomer with her own moves and who ends up being a core component of Deltarune‘s hidden, chilling alternative route, currently referred to as the “Snowgrave” route. Roughly halfway or so through Chapter 2, your party swaps out to being just Kris and Noelle, the latter of whom is essentially a frost mage. The way Noelle fights and interacts with Kris is already interesting, but the way those abilities play into the Snowgrave route and its darker implications set a really interesting tone for Deltarune moving forward.

In Undertale, the route where you kill every monster (generally referred to by fans as the “Genocide” route) is intensive, requiring you find and take down every single one. It opens up new bosses and interactions, changing the story entirely, but it is straightforward: kill or be killed. It is you against the underground world of monsters.

Which brings up what’s so interesting about Snowgrave to me: choosing to head down the No Mercy route is a personal choice that you make, and it reflects your own actions. But in Snowgrave, you’re opting to push someone else down a path. You’re even doing so maliciously, knowing what it entails; Noelle believes she might still be in a dream, or at least hopes she is, but Kris—and you—are much more cognizant of the reality of freezing the entire world over.

And when it ends with Berdly encased in ice, Noelle walks off the battlefield, trying to figure out why she feels sick over what’s just happened. Deltarune Chapter 1 touched on the idea of what in-party friction might feel like, if you’re trying to prevent a party member from hurting others; but Chapter 2‘s Snowgrave route dives into what it’s like if, instead, you encourage it.

The party dynamic is played up so much in Deltarune, which tracks as it’s a major defining point of separation from Undertale. Chapter 2 takes it further: spared enemies are recruited to your world, ACTions with other teammates become more involved, and the final battle acknowledges the friends and allies you’ve collected on your journey. And yet, in its darker route, it also acknowledges that you are still the person with the most agency in this world: you can die and live again. You can SAVE and reload. You persist, not just through in-game death but through multiple game states and worlds. And now, you can not only choose to go down a more gruesome, stomach-churning path, but doing so will mean taking others there with you.

Deltarune Chapter 2 feels like a strong statement of what Deltarune can be, separate from its own legacy. There’s a mix of wariness and eagerness, I think, in trying to explore a world again; I felt it going into this year’s NEO: The World Ends With You, and I felt it again with Deltarune. As much as I enjoyed the first chapter, it concluded with a feeling of wonder what would be next, and what it would look like. 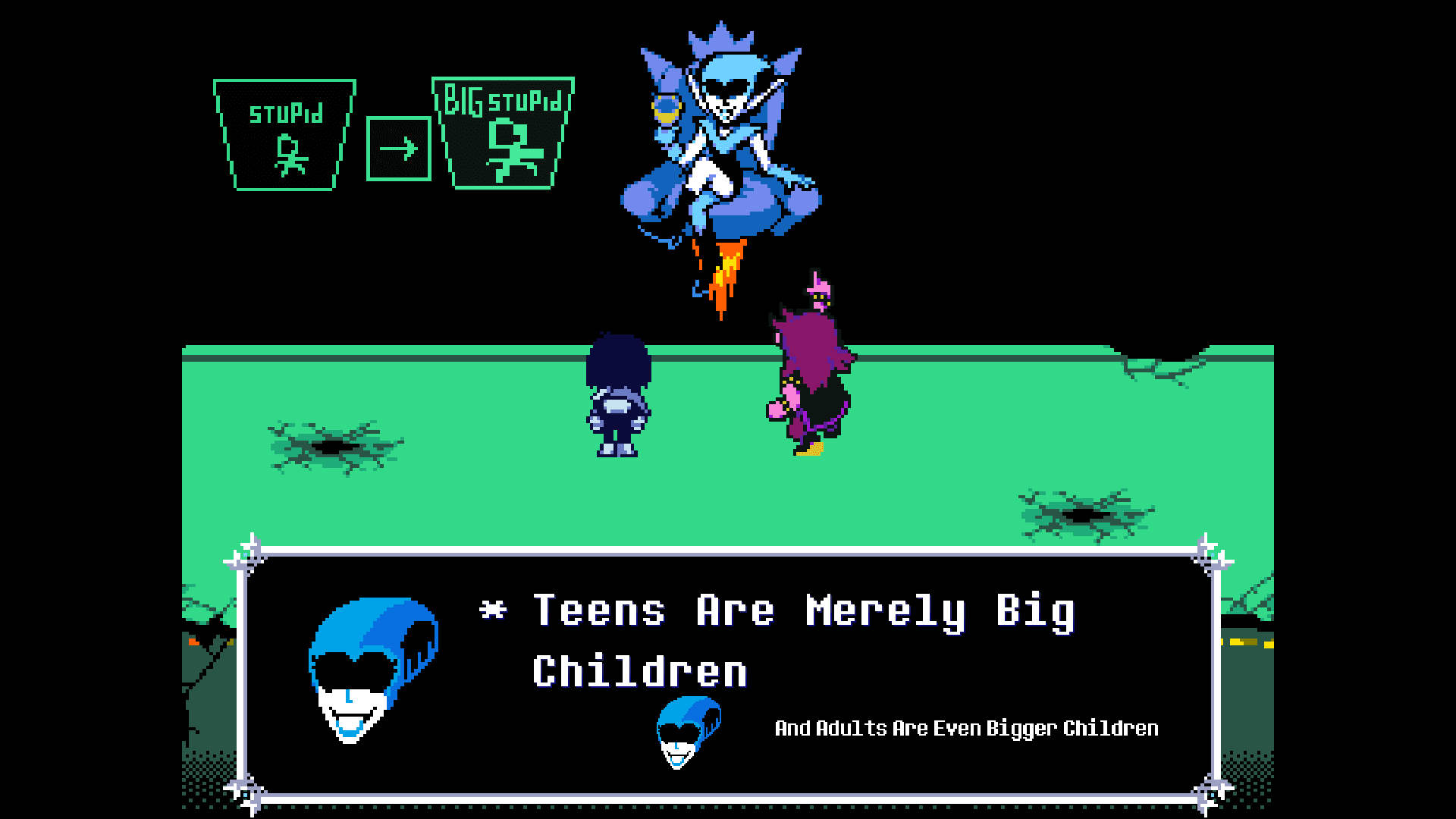 I’m still curious now, but the second chapter sets a much firmer stance: it is its own story, with its own characters. It’s not a rehash of what made Undertale great, and it’s not wholly separate from Undertale either; it feels like an exploration of what these choices and themes can become, especially as its scope expands outwards and into more chapters, more characters, and more locales.

Different routes and scenes only lead me to wonder what Deltarune will do moving forward. How far across this game will these choices extend, and how drastic will the differences become? But it’s a pretty exciting feeling to not just be excited for Deltarune as more from the extended Undertale universe, but as a story in its own right. Toby Fox and the team he’s assembled as part of bringing together Deltarune are crafting a really intriguing story, both on a raw narrative level and in what it’s doing with the expectations of an Undertale follow-up. And now that I’m finished with Chapter 2, I can’t wait to see what’s around the next bend.