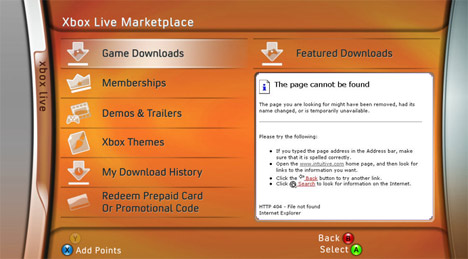 Last week, Grim told you about Microsoft’s plan to delist underperforming titles from XBLA. Since then, there’s been some confusion over what exactly delisting really means here. Aaron Greenberg, Director of Product Management for Xbox 360 and Live, went on Major Nelson’s Podcast yesterday and clarified what exactly Microsoft is doing.

First up, whatever games that are going to be delisted based on all three of Microsoft’s requirements (older than six months, less than 65% on Metacritic and less than a 6% conversion rate), will still be available on XBLA. So, if you already own a title and it gets deleted from your hard drive for whatever reason, you’ll still be able to re-download the game. Furthermore, you can purchase a delisted game through the Tell A Friend option.

Basically, they’re moving the underperforming titles away from the main store to the “back room”, as Aaron put it in the interview. Full Live support, such as multiplayer and leaderboards, will still work just as normal for the delisted titles.

Now then, I bet you’re curious as to what games fall under Microsoft’s requirements. Hit the jump to see the list of XBLA titles that might be getting pushed to the side.

The 6% conversaion rate, which is the percentage of people that download the trial version of a game and then convert to purchasing the game, is only known by Microsoft. This list just gives us a basic idea of what might be leaving the front of the XBLA store:

See any titles that surprise you here? Honestly, I’m more surprised that there are so many reviews of re-released classics such as Contra on Metacritic. Easy money, I suppose.