With the success of Level-5’s Professor Layton series (thanks, Lisa Kudrow!) it’s not altogether surprising that other puzzle games, like Nivel21’s upcoming Rotor’scope: The Secret of Endless Energy, might take a few pages from its book. Like Layton, Rotor’scope takes place in a vaguely neo-Victorian setting (the game starts when the protagonist’s father is killed in a zeppelin accident, for example) and its puzzles are strung together by an overarching narrative.

That, however, is where the similarities end.

I got a chance to play Rotor’scope during Microsoft’s Dream.Build.Play competition at PAX a few weeks ago, and while I only played for a few minutes, I can confidently say that pigeonholing Rotor’scope as a Layton clone (which was, admittedly, my snap judgment) is uninformed and lazy. Where Professor Layton tackles several varieties of brain twisters, Nivel21 have created one dastardly puzzle that gets tweaked and modified throughout the game. There’s a trailer after the break that will show you what I mean.

Given that the Dream.Build.Play booth was in the middle of a crowded show floor, it was relatively easy to guage other writers’ and attendees’ reactions to Rotor’scope. Most people seemed to be pretty dismissive of the game, but a Doctor Who–inspired, steampunk puzzler can’t be all bad, can it?

It’s actually not bad at all. Find out why the game won thrid place (and $10,000) at this year’s Dream.Build.Play after the jump.

Nivel21 Entertainment is a young Spanish development team that joins Over the Top (NyxQuest) as the only Spanish studio I’ve ever heard of. Rotor’scope has been in development for only eight months, but it already boasts more features than most Xbox Live Indie Games even dream of implementing: a robust puzzle creator, Facebook integration, Xbox Live leaderboards, and over 150 puzzles.

But, before I get ahead of myself: as I mentioned before, Rotor’scope is a puzzle game, and a fiendishly creative one at that. The rules seem simple enough, as described by project manager Mauricio García:

We wanted to create a puzzle game with an easy control. It was inspired on the new motion controllers … the most easy set of moves we thought were turn left, turn right, and turn over. After thinking and evaluating some ideas about which way we could use these moves to play a puzzle game, the final concept came up: a series of closed puzzles showing a different challenge each time, in which the player only can turn the piece container. The gravity does the rest.

What García doesn’t mention is that you’ll be doing all that turning in order to get all of the blocks of a certain color to match up. The short demo I played certainly had a gentle learning curve, bordering to child-like, but the spatial orientation needed to flip an entire puzzle board upside down effectively necessitates some time for us non-engineers to get our bearings. I heard some grumblings from the gamers next to me, but I was thankful that Nivel21 decided to ease me into the mind melting. 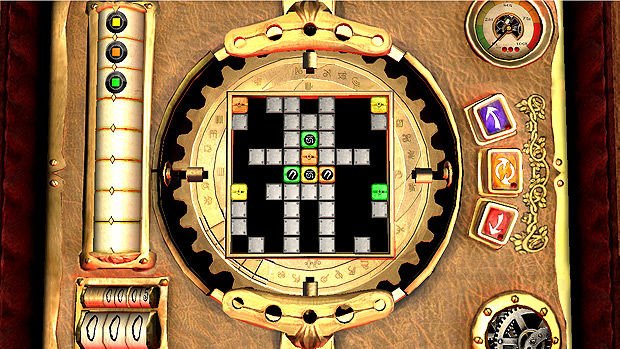 If you can’t tell by the trailer above, I’ll put it bluntly: the later puzzles are fiendishly difficult. Unless you have a knack for planning and spatial strategy, you’ll probably often become so confused, your puzzle so twisted, that it will be easier to start over than try to sort it out. That is, unless the variety of “bombs, metallics, beams, hyper-explosions, and surprises” don’t wreck you first.

In case you’re feeling discouraged, you have the story of Julie and Traveller to keep you motivated. Rotor’scope begins with Julie moving into an old manse, finding the eponymous rotor’scope, a mysterious device that allows her to manipulate the objects around her. Using the rotor’scope, Julie begins to unlock some hidden rooms and open safes and is quickly sucked into a mystery, accompanied by her friend Traveller and Anythree, a time machine.

What little I saw of the story seemed interesting, albeit a little uninspired, but García’s invocation of Doctor Who is promising: it’s “strongly inspired on Doctor Who‘s adventures, but taking place in a steampunk universe. There’s even a joke about that in one of the dialogs. In the analogy Traveller is, as the The Doctor, someone clever, impulsive, even eccentric … And on the other hand, Julie has the role of the “Traveller’s assistant,” much like The Doctor’s companion.” 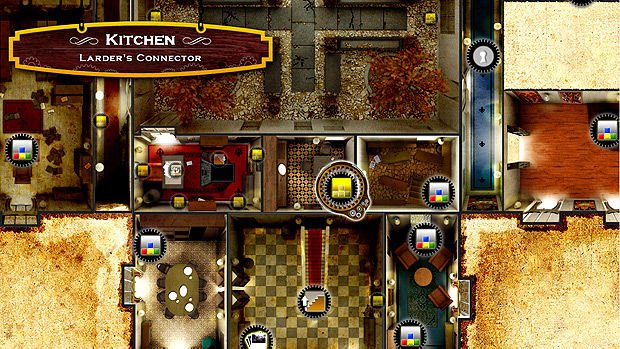 So, let’s recap: A steampunk, Doctor Who-inspired story that ties together 150 difficult spatial orientation puzzles and a robust puzzle editor and Facebook functionality. If that’s not enough to dispel any rabble about Rotor’scope being just another puzzle game or some sort of low rent Professor Layton, I don’t know what else to say. The game is coming out as an Xbox Live Indie Game, so you’ll be able to check it out for yourself soon enough.