When Quantic Dream CEO and co-founder David Cage watches movies or television, he dreams of the day when game designers can have the same liberties. Cage, whose mature interactive drama Heavy Rain hits stores later this month, says he feels that censorship in games is “probably the strictest in all the entertainment industry.”

“One territory asked me to change one scene because it was too emotional,” the 40-year-old Cage tells me. “I read the email ten times to make sure I got it right. What do you mean ‘too emotional’? Can you change the end of Titanic, it’s really too sad. Same thing for Gone With the Wind — just add a couple of jokes near the end so we don’t cry. Woody Allen, too funny. [Francis Ford Coppola] too real. [Martin] Scorsese too violent.”

He makes a point to say that he doesn’t compare himself to “these masters,” as he puts it. But he does say their goals are the same — to create emotions.

“I’m am sure once society will have a better understanding of what games really are, mentalities will quickly change,” Cage says.

He’s not the first one to do it, but he makes parallels to rock n’ roll, which at one time was perceived as youth perverting “Satanic music.” He also points to comic books — his home country of France had a strict “youth protection” against comics in the 1950s.

“If you show two people in love kissing in a videogame, you need to put fades to black before their lips are in contact, before she takes off her bra. Otherwise it might give ideas to these seventeen-plus people who probably never thought about all that before,” he says sarcastically. 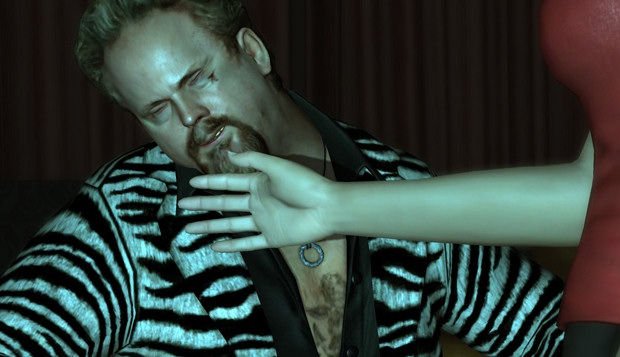 The medium is evolving though, and he feels that game makers will need more breathing room in order to tell deeper and more emotional stories.

“Interactivity changes,” he explains. “Yes, there are some Mario games for a three-plus audience, and that’s fine, but the medium now evolves. It will have more and more authors in the near future who will need some reasonable freedom of speech. Not to shock children, but to tell mature stories for a mature audience without being sold in sex shops. I hope I will see this before I die, and I would really like more game authors to talk about this issue and fight for their rights.”

Cage also points to difficulties creating these mature scenarios for different regions, telling me that “trying to create a mature experience for a mature audience is a massive challenge, because every single country has a different understanding of what could be perceived as shocking.” Quantic Dream’s previous title, Indigo Prophecy, had “adult content” (which the developer admitted didn’t have a significant effect on the game’s plot) removed for its North American release.

As for Heavy Rain, the PlayStation 3 exclusive will see a release in multiple regions with no compromise or apparent censorship. The ESRB rated-M title (for “Blood, Intense Violence, Nudity, Sexual Content, Strong Language, Use of Drugs”) will hit shelves on February 26. We’ll have our full review up later this week.