[In “Dat DLC,” we check out some recent downloadable content to give you an impression of what you may or may not have missed out on.]

The excellent Orcs Must Die! received the War Mage expansion pack “Artifacts of Power” on Steam shortly after its release, followed by the “Lost Adventures” pack which added five new fortresses to play in along with a few new enemies and an extra trap. Xbox 360 owners had to wait a little longer for their version of “Lost Adventures,” which included both pieces of previously released downloadable content in one package.

We checked out the DLC for those of you who liked Orcs Must Die! but didn’t pick up any extra content yet, whether it’s because you were bankrupted by the Holiday season or you weren’t sure if it was worth grabbing. 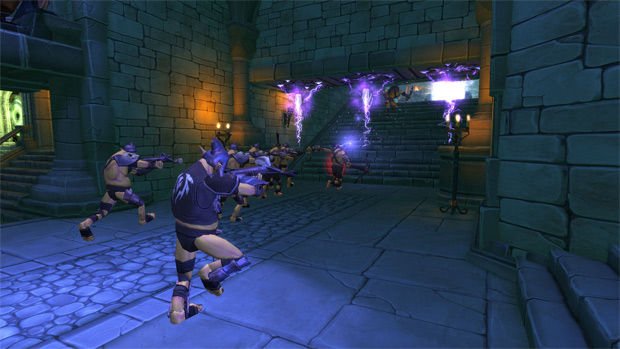 The Shock Zapper is a ceiling-mounted trap that zaps whatever is flying or walking underneath over a pretty tall area. For 800 coins it’s not particularly cheap, though. When only facing ground units, you’re better off with a few Sticky Tar Traps and a Swinging Mace on the ceiling above them. Alternatively, you could just spend the 200 extra coins for a Sniper Autoballista which only fires in an arc direction from the ceiling, but in large numbers, the Autoballista can be more helpful in certain levels.

The Shock Zapper is more of a novelty trap to use in those levels where you are continuously hounded by flying critters, when you don’t want to summon an army of Archers to deal with them or can’t place Arrow Walls along the flyer paths.

The Floor Burner acts as a mix between a less-powerful Dwarven Spring Trap and the Sorcerous Brimstone floor trap. It pops up to scorch ground units in a two-tile area it’s aimed at, and any orcs that walk over it get popped backwards a tiny bit. This is a really fun trap to use in any level. You can make layouts of Floor Burners and Tar Traps to create sections of slow incendiary death where any enemy that passes one part will get popped right back into the fire pit.

It’s only 800 coins, 100 more than the Sorcerous Brimstone, and it’s a more reliable damage dealer than the Brimstone. Since it also covers the same space that two Brimstone traps would cover, you save some money in the process. You’ll still want to slow down the enemies to keep them in the fire for longer, however, so if you add two Tar Traps to the equation you end up with 1600 instead of 1400 coins for two Brimstone traps. A small price to pay for the added bonus of springing orcs backwards and the joy of cleansing waves of dirty orcs by belching fiery doom all over them. 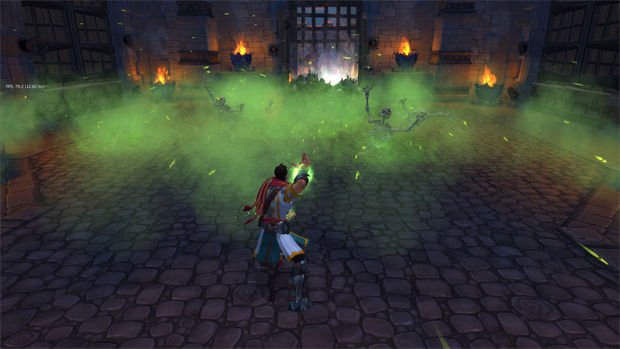 The Satchel is a weapon that allows you to throw acid flasks on the ground. You can throw around 3-4 with a full mana bar. Throwing them right at enemy units will deal a great amount of area-of-effect acid damage, turning orcs into skeletons similar to the way acid cauldrons on some levels act. Since skeletons are awesome, this is a pretty fun weapon to use against groups and it works well enough. You can also throw them on the ground, then detonate them with the alt-fire option. Or you can throw them on the ground and shoot them with your Crossbow.

The area damage is large enough to deal with most waves of basic enemies, so it can be a ton of fun to funnel waves into tight paths using Barricades or other traps followed by a few acid flasks. While not quite as useful as the overly powerful Ring of Lightning, the Alchemist’s Satchel is enjoyable enough to fill up a slot if you can spare one.

These are not that great. You can use them to drain health from enemies, which works alright against the weaker types of enemies, and use the alt-fire to trade health for mana. First off, you shouldn’t be in any position to require health to start with and the Gauntlets don’t do enough damage to replace any of the more useful weapons in your arsenal. You can always stun enemies with the Crossbow’s alt-fire instead if you really need to keep them from killing you. In theory, you could keep draining health and then use that health for mana, followed by draining more health to repeat the process. In practice, it’s a bit of a clumsy combat system to rely on. 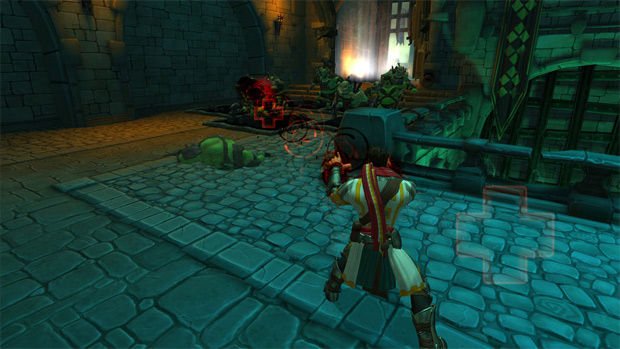 The “Lost Adventures” DLC adds five new levels in a mini-campaign, the Frost Bat and Cyclops Mage enemies, and the Mana Well wall trap. On the Xbox 360, this DLC includes the aforementioned weapons and traps from the “Artifacts of Power” pack.

The Mana Well restores mana but also takes a while to recharge its capacity. Ideally, you could place this between two entrances so you can drop a lightning storm or line of fire over a Coinforge near one entrance, recharge at the Mana Well, and then drop another alt-fire magical defense over a Coinforge at the other entrance. Another good option is to place it somewhere near your Rift, so you’ll have some backup mana to use whatever magic weapon you favor to get rid of those annoyingly fast Kobold Runners and their suicidal Kobold Sapper kin. For 1500, it’s also pretty damn expensive and it doesn’t recharge mana fast enough to rely on it exclusively in early stages. If you like to do magical weapon runs through levels, it’s a useful addition when combining it with Spell Weaver upgrades. If you’re more into traps, this is pretty much a waste of a slot. 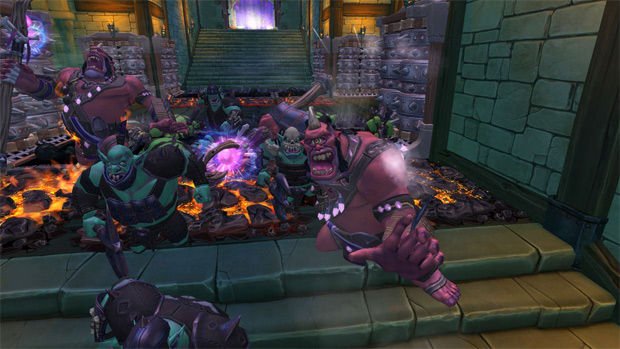 The Frost Bat and Cyclops Mage add some spice to the wave variety. Frost Bats are a crossbreed between the tiny flyers and the Fire Bats, attacking you with ice damage that also freezes you in place for a few seconds. The Cyclops Mage shoots homing orbs which are survivable enough on their own, but when there are multiple Mages, they can kill you in a heartbeat if you’re not paying attention.

Although one of the new levels is just a reverse version of an existing level, they are all fun to play and a worthwhile addition to the core set.

“Double Trouble” quickly alternates waves between two separate entrances, forcing you to either decide which path to cover with traps while you manually defend the other, or to try and keep both paths defended with traps and spells while you teleport between the two entrance areas. It’s a good first map to play around with your new equipment.

“Reverse Tower” is a reverse version of “The Tower” from the regular game, which was one of the better levels. Even though it’s a rehash, the new paths and equipment allow for enough variety to make it feel different enough. You still have plenty of space to place a ton of archers on a platform, and to play around with ground and wall traps on the long way down. 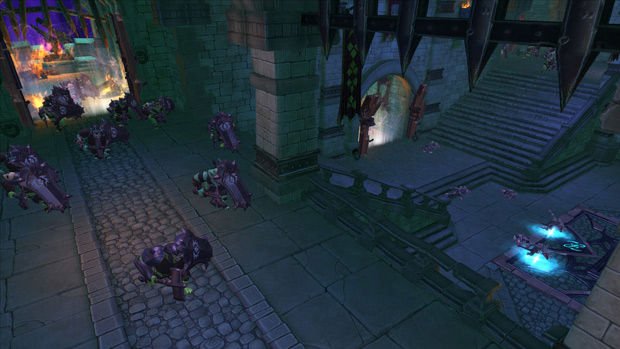 “The Pit” features three entrances at a short distance from your Rift, with two paths to defend. Kobold Sappers will make short work of any attempts to barricade one path shut unless you know when to expect them, so this level involves some dual-path planning for your traps.

“Triple Down” offers three entrances that follow three straightforward paths down to two rifts, with a spare room filled with explosive barrels to position (unless you are playing on Nightmare). The Kobold Sappers are not too hard to deal with, so you can close up two paths with Barricades and funnel orcs into whatever kind of trap combination you like. There’s some good opportunities for playing around with the new floor and ceiling traps in this level, making it a blast if you prefer laying waste to funneled groups.

“Great Gorge” is a seemingly complex level featuring bridges, underpasses, and flyers to deal with. Because there are so many approach to cover and to close off, there’s a lot of ways you can approach this one. It’s one of those levels where you have to occasionally place traps during waves on War Mage difficulty if you’re not paying enough attention. 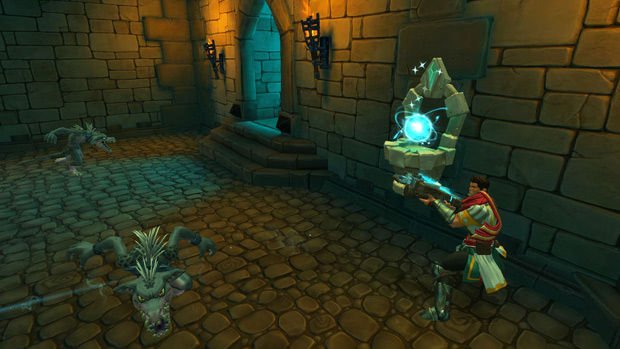 The new weapons and traps can be a bit hit or miss depending on what kind of player you are. The Floor Burner is great for the floor trap fan, the Shock Zapper is not that useful but worth placing when you feel like messing around, the Alchemist Satchel is a fun because of skeleton orcs, but the Vampiric Gauntlets are pretty useless. While the Mana Well is exclusive to the “Lost Adventures” DLC, whether or not you’ll ever use it will depend heavily on how much you rely on magical weapons.

The new levels in the “Lost Adventures” DLC campaign simply offers more Orcs Must Die! without adding any new mechanics or forms of gameplay that emerge from the level design, but they offer the same kind of fun you’ve come to expect if you’ve played the regular campaign. Basically, if you liked the levels in the vanilla game, you’ll like the DLC ones. Likewise, the new enemies don’t drastically change how you play Orcs Must Die! but neither are they going to make you rage.

When it comes down to it, Xbox 360 fans of Orcs Must Die! who want more of the same with a few extras can do far worse than picking up the 400-Microsoft-Point DLC. You get some new content, and new equipment to use in the core game as well. PC owners can pick and choose their DLC packs, paying a little more than their console brethren in return for having earlier access to it. If you own the PC version and you are on a really tight budget, I would suggest picking up “Lost Adventures” first, playing through it, and later picking up the “Artifacts of Power” to play through all of the levels one more time.

Filed under... #DLC#Orcs Must Die!