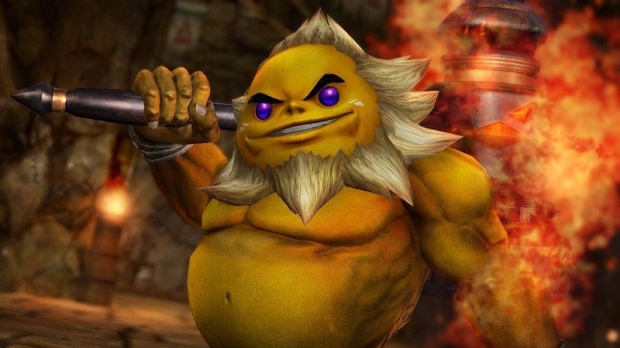 Watch out for harsh rhetoric!

Most of the official trailers for Hyrule Warriors are short compilations showing off big and boisterous attacks. What they haven’t shown is much of the game’s overall flow and pacing. That’s caused some to worry that Nintendo isn’t proud of the actual game they’re publishing here, and are hoping consumers will buy into it based on concept and flash alone.

Maybe the streams that Nintendo has been running for Hyrule Warriors at events like E3 and SDCC will help abate those worries. This one shows off Darunia, the Goron supreme, taking down copious foes as he sallys forth to on his mission to help out fellow Ocarina of Time alumni Princess Ruto.

We also get a small look at the game’s original story and taste of its”morale” system – a carry-over from the Dynasty Warriors series. While Queen Zelda isn’t in the fight here, she does play an affect role in the battle by making the Hyrule army feel bad about itself. Her “harsh rhetoric” lowers their morale, causing them be less excited about killing and/or being killed. Making your army feel bad about itself is something of a rookie mistake for a General, which causes Impa and Sheik suspect that Zelda is an impostor. That’s something that most players familiar with Sheik probably already suspected. Obvious plot twists aside, it looks like a smart move to let the narrative play out with unintrusive chatter while the combat rolls on, working to minimize breaks in the action while invoking the morale system to effect the ebb and flow of battles. That might help the game to feel like less of a one trick pony.