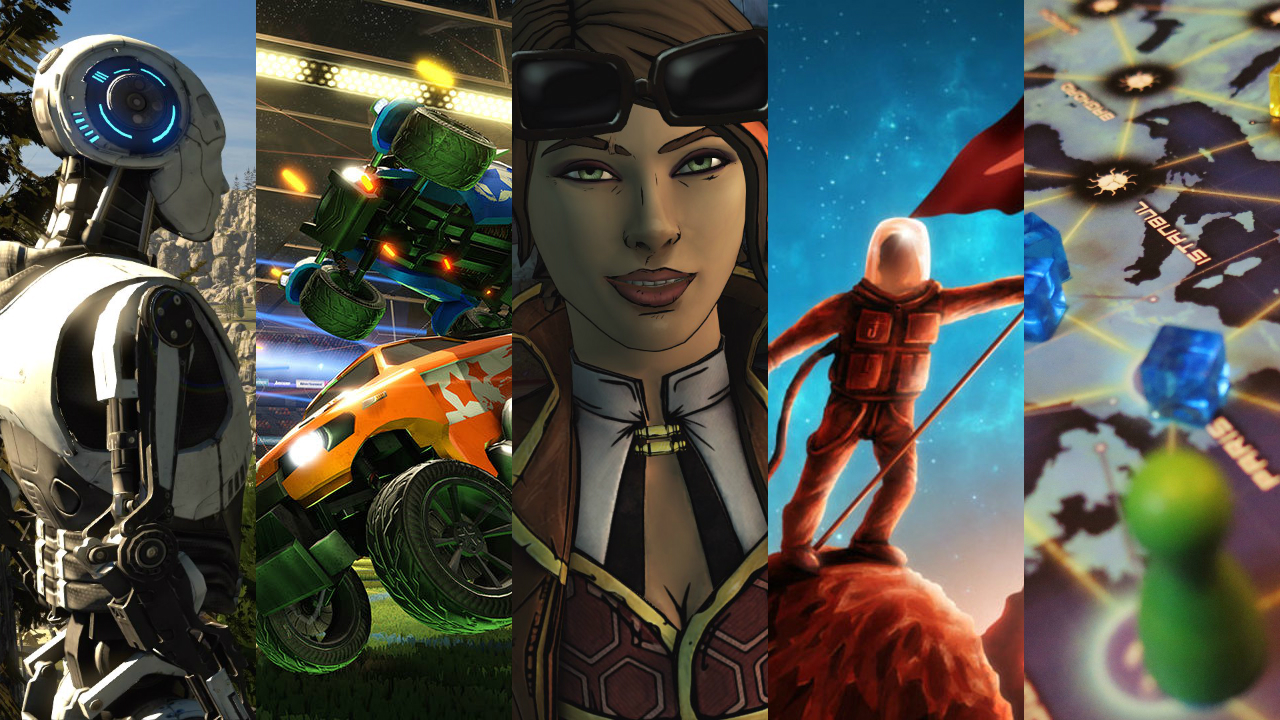 As a site, we awarded our games of the year last month as a whole unit. Those are official; we came to them through a democratic process taking votes from managers, editors, and contributors.

Our overall Game of the Year went to Bloodborne, but you won’t find that on my list. Nor will you find The Witcher 3, Metal Gear Solid V, or any of their ilk, because I didn’t play those games. Maybe they’re good. I don’t know. What I do know are the following games and how much of an impact they had on me.

This was a great year for mobile gaming (Steven Universe: Attack the Light! just missed my top ten). Lara Croft GO is a perfect example of mobile done right. It can be tempting to use a property like Tomb Raider/Lara Croft and try to shoehorn it onto a touchscreen with virtual buttons or tilt controls, but GO takes a more elegant route.

It slows the action down to a turn-based puzzle, which uses gesture control for Lara’s actions. Despite the change of pace, it still feels very much like a Lara Croft game with its focus on tombs and the potential for raiding. Simply put, Lara Croft GO was built with both the franchise fundamentals and the mobile platform in mind, and it shows.

Speaking of taking the platform into account in design, Affordable Space Adventures is just about the best non-first party title to show what the Wii U is capable of doing. Heck, developer KnapNok Games might even have the edge on Nintendo in that regard. When the Wii U was first unveiled, I imagined games like Final Fantasy Crystal Chronicles and The Legend of Zelda: Four Swords Adventures, but until this there hasn’t been much that truly necessitated the Wii U GamePad.

It works especially well with a partner, where one takes on the role of the pilot and the other plays engineer. Solving puzzles in tandem requires communication and coordination, and it gives an almost Star Trek-esque glimpse of working as a team on a spaceship bridge.

At this point, Undertale is a cultural phenomenon. It won GameFAQs’ “Best. Game. Ever.” competition. It spawned several of our favorite new characters. Our own Ben Davis gave it a coveted 10/10 in his review. Many have compared it to EarthBound, one of my favorite games of all time.

With all of the hype going in, I had lofty expectations. It did not disappoint. The world is imaginative and so many of its denizens are worthy of stardom in their own games. On top of that, it’s refreshing to play something that emphasizes conflict resolution through nonviolence, in what often feels like a sea of games focused only on killing.

I just checked my 3DS to see how much time I’ve spent on Pokémon Shuffle on 3DS. I have 151 hours in it. That’s one for each of the generation one Pokémon. I probably have more than 50 hours on Mobile. And the total amount of money I’ve spent on it? A whopping zero dollars.

This might be the most contentious item on my list. Chris Carter rated Shuffle at 3.5/10, but I can’t deny how much of my downtime I enjoyed matching little Pokémon heads together this year. And I didn’t even get into it until months after release. Sure, it can get a little shady with its microtransactions, but to me, figuring out how to succeed without paying money is like a metagame on top of the main game.

Talos was written in part by Tom Jubert, who also wrote the masterpiece The Swapper. It dialogues deep philosophical ideas with the player, while Croteam’s puzzle design is taxing for a different part of the brain. For a game made by the same people who worked on Serious Sam, it was a total surprise that The Talos Principle is so intellectual on so many levels.

We might have given Downwell our Best Mobile Game award, but to me, it would be more appropriate to award it with “Best PC Game That is Also on Mobile.” Best Mobile Game, though? That’s Alphabear, all the way.

On its surface, it seems like a simple word puzzle game, but after only a few plays, its depth is revealed. It combines the usual work with vocabulary and anagrams, but adds in strategic elements in the letter countdowns and spatial considerations. It introduces interesting risk/reward decisions; sometimes the biggest word is not the best play. From a pure design standpoint, Alphabear is one of the smartest games of the year.

So I don’t think Downwell is the best mobile game of 2015, but damn, it is a great game on PC. It is gaming in its purest form. It could have existed on the NES, and it would have been just as great. At first I didn’t think I would be able to beat it, but like its inspiration Spelunky, I got noticeably better as time went on. These days I’m working on Hard Mode. I know I can do it.

Downwell occupied a space in my Steam library where I would play it when I couldn’t decide what else to start up. Maybe I didn’t have two hours to devote to something meatier, so I’d commit to fifteen minutes going down a well. But then I’d do it again. And again. And oh look, I just spent two hours playing video games anyway.

I was really looking forward to Rob Daviau’s SeaFall this year, but alas it was pushed back to 2016. In its place was the collaboration between Daviau and Matt Leacock, adding legacy content to the ubiquitous cooperative board game Pandemic. The result, Pandemic Legacy, is amazing.

The idea behind legacy board games is that the board changes depending on events that happen during play. Your decisions affect not only the current game, but potentially all future games on that board. Stickers go down. Cards get torn up. Events are permanent. There’s no turning back. Pandemic Legacy takes the formula down a more linear path than Risk Legacy did, but it’s still the essential board game experience of 2015.

Perhaps the biggest surprise of this year was Rocket League. I never played Supersonic Acrobatic Rocket-Powered Battle Cars, so if you had told me a racing/sports hybrid would be one of my favorite games of the year, I would have thought you were crazy.

One of the amazing things about Rocket League is how it feels more like a sport than most sports video games do. By putting players in control of just one car on the field, requiring keen battlefield awareness and teamwork, and injecting the potential for high-skilled acrobatics, it emulates the experience of playing soccer, where FIFA instead emulates the experience of coaching soccer. And what do you know, playing is much more fun than coaching.

1. Tales from the Borderlands

Borderlands might be my favorite current IP. I played through Borderlands 2 a couple dozen times on two platforms. The gameplay is a huge part of that, but the world Gearbox built has also drawn me in with its dark humor and sci-fi lore. Taking that framework and building a narrative-focused experience from it was a tall order. Telltale took that opportunity and knocked it out of the park.

With great comedy writing, Tales from the Borderlands has fantastic joke density, putting the main series games to shame in that regard. But then there’s also drama and adventure, and outrageously badass moments. Following the stories of Rhys and Fiona through to the end makes me want more of that, but it also gets me hyped for the next “main” Borderlands game, because Telltale made its mark on the series. The world will be a different place because of what happens in Tales, and that’s one of the coolest things for a fan of the series. My hope for Borderlands 3 is that Gearbox takes on some of Telltale’s writers at least as consultants, because Telltale beat Gearbox at its own game.

The “Living in the Past Multiplayer” Award: Tie between The Last of Us and Destiny

I played a lot of new games for review and for general pleasure this year (over 50!), but I spent a whole lot of my time with these two games. The Last of Us has incredible multiplayer, slowing down the action from typical shooters, focusing more on tactical play, teamwork, and stealth. Even a couple years after release, it still has a decently-sized community to play with.

On the other end of the spectrum is Destiny, whose multiplayer is based almost entirely on twitch skill (with the rest coming from dropped gear). I didn’t get into it until after The Taken King released this year, but I found myself enjoying it quite a bit more than I expected to. I’m reluctant to call it good since there’s so much about it that’s bad, but I find it comforting to sit back, turn my brain off for an hour or two, and just pop some alien heads for a bit.

The “Always in the Back of my Mind” Award: Ultimate Angler

Earlier this year, Nintendo released two new StreetPass games for 3DS: Ultimate Angler and Battleground Z. The two mirror the dynamic introduced with Flower Town and Mii Force before them: the former is quiet and unassuming while the latter is action-packed and more like a traditional video game. And then after playing for months, eagerly popping the 3DS open every so often, which one persists? Slow and steady wins the race, bub.

Ultimate Angler has kept me going on it for months, slowly plodding away, catching legendary creatures like Nessie or a Dragon (along with the more mundane sea bass and trouts). It’s always there in my pocket, waiting for that lovely green light to show up.