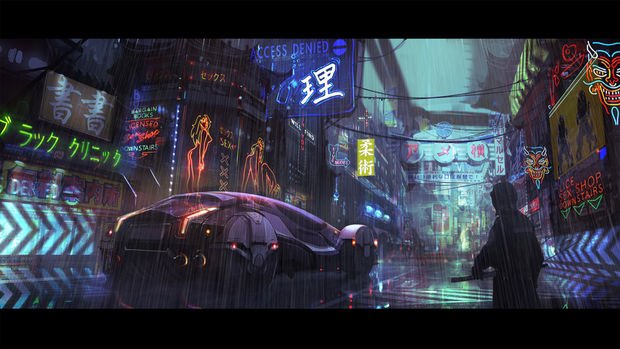 You’re not going to get cyberpunk’d

Last week, Dale brought us a first look at Reborn from the Tokyo Game Show, along with an enormous gallery of amazing concept art. The rain slick, neon lit cyberpunk re-telling of the legendary samurai Musashi is something I want deeply, especially since Prey 2 was canned and Cyberpunk 2077 is ages away.

Its Kickstarter is up with a $200,00 goal. Also heavily detailed are possible stretch goals with all sorts of enticing possibilities, like PC and Xbox One releases, a semi-open world, and co-op. As it stands, the action game is aiming for a late 2014 release on PS3 and PS4. Indie developer Elemental Labs is already a registered Sony developer.

There isn’t much to see yet, aside from the lovely concept art. Though something about Musashi’s face is bugging me. I can’t tell if he just looks very Anglo or simply too young and weirdly smoothed out. The concept art for Tsukihime is also sort of ridiculous.

You can also scroll to the bottom of the Kickstarter page and listen to a bunch of the OST. It’s pretty good. Maybe if you like the free music you’ll throw a couple dollars their way. Anyways, I hope this is good. It sounds lovely in theory, especially in script writer Eric Thuan’s explanation of the concept.