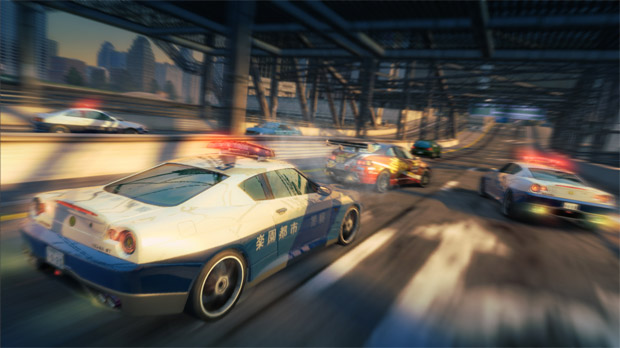 Disclaimer: the screenshot above is not from Criterion Games’ latest trailer for the Burnout Paradise Cops and Robbers Pack. Why? The better question is, why not? In all seriousness, the image has more pizazz, but the video (after the break) has less blur; it’s an equal trade-off, I think.

Probably the coolest thing about this DLC that you might not know is that every car, excluding the Burning Route and Carbon cars, will have a police skin.

Once I got all of the smashes, billboards, jumps, and completed far too many online challenges in Paradise City, I figured it was a good time to take a break. 50 or so hours in about three weeks? Kind of insane, considering I’m not usually huge on racing games.

Chances are, I’ll have had enough of a cool down period by the time the new DLC comes out to start playing again. Anyone else going to as well? There’s also going to be a more in-depth trailer for the Cops and Robbers Pack in the very near future, so be on the lookout for that.