Maybe far away from videogame applications, but cool for putting you in a virtual space

I’ve had some fun with the first and second iterations of the Oculus Rift, but it’s mostly a novelty I don’t want to spend extended time in, especially if it’s not a genre suited to the Rift. Anything in a cockpit works well, naturally, because you lose the need for incongruous simulated walking mechanics.

The Crescent Bay demo Oculus showed off at Games Connection Europe is a huge step forward, though there are still some issues, including movement. Crescent Bay ups the screen resolution, adds 360 degree field of view, and motion tracking.

With Oculus CEO Brendan Iribe saying of the consumer Rift package, “We’re getting very close. It’s months, not years away, but many months,” I’m a bit more comfortable with the notion, even if I’m still not sure what the Rift has to add to non-cockpit, traditional gaming experiences. 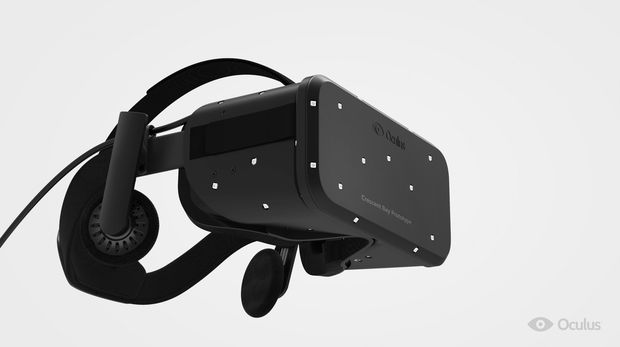 Rather than being sat in a chair, the demo was is a closed off room, and I was stood on a roughly 4×4 black mat. The positional tracking meant that you could move around (within the mat’s boundaries), rather than needing a controller for movement. The 360 degree view meant being able to look up, whip all the way around, and feel like you’re properly in a virtual space.

What began was a series of demos set in a variety of virtual worlds. One was set on an empty space ship and as I crouched down in real life to get a closer look at the grate I was standing on, I was imagining all of the potential survival horror opportunities, if something were to claw at the vent as I neared. It’s basically what Until Dawn is trying to do, a bit clumsily, with fixed cameras, zoom ins on objects, and sixaxis rotation.

Or maybe we can finally have a decent detective game where you’re actually tasked with examining a crime scene and drawing conclusions. It’s just the input that needs to be worked out. There’s something discordant about moving your head like normal as the camera, but still walking by pushing up on a controller. That’s the real problem with Oculus, but there could be some cool, Oculus-tailored experiences.

One of the demo worlds was a miniature, moving paper craft diorama of a town. I walked forward, leaning down, to get a better look at the little paper craft firemen that were trying to put out a fire. It was neat. If Oculus never catches on for games, it will still be neat as virtual tourism, or a cool way to explore virtual 3D objects.

There was a crescent-headed alien talking at me in one demo and I instinctively waved, with my real-life hand, when he waved at me. Another was set on top of a rad skyscraper in some alternate future that still uses zeppelins. I stepped forward two steps, looked down, and got a bit of vertigo. Don’t push me, ’cause I’m close to the edge.

The most upsetting world was the Unity world, which just sent large blue things at you. It was like being in a space ship engine. And when you turn around and a giant electric blue stone is coming right at you, it’s freaky. Now I know how new ghosts feel when something’s coming right toward them and just phases through.

Last, most videogame-y, was the Unreal demo which dragged you in a straight line amidst slow-motion action on a New York-looking street. Looking right and left were assumed allies being shot at by a giant robot, a car blew up and spun in the air above you, frightened driver still inside. It mostly just made me want to watch Birdman because it reminded me of that wild action bit from the trailer, sans the existential crisis and surreal.