A few months back, I had the opportunity to sit down with Insomniac’s James Stevenson who gave me my first demo of Ratchet & Clank Future: A Crack in Time. As a huge fan of the series dating back to 2002, I was pleased with what I saw — a polished, action adventure title that was looking even better than the previous PlayStation 3 Ratchet titles.

As expected, the game looks wonderful, Insomniac “tightening up the graphics” and improving on the Insomniac Engine it had used for previous PS3 Ratchet adventures, as well as the two Resistance titles. The weapons were wild and creative, something that’s become somewhat of a trademark of Insomniac’s games. Ratchet’s new hover boots (boots that allow him to — wait for it — hover quickly as he moves) were a blast to deploy and made traveling the lush, jungle-like planet I was on not only easy, but fun. Even more impressive were the game’s cut-scenes, artfully directed and written to the point where I openly joked with Stevenson that they should drop this videogame crap and start making full-length feature films.

But it was the Clank gameplay that really had my head spinning. While some say that the Clank portions of the games are never really their favorite, this might catch your attention — Ratchet’s little robot buddy can now control time. Not in the Prince of Persia: Sands of Time “OMG we’re slowing down and rewinding time sense,” but more in the sense that Clank can record and sort of bend time to create multiple versions of himself that work in tandem to solve environment puzzles.

The results are all a bit mind-melting, enough so that following along (surrounded by other journalists and, strangely, The Daily Show‘s Wyatt Cenac) proved to be a bit difficult. So when I fired up the five level preview build of Crack in Time that Sony handed me at PAX, I was glad I’d get some alone time to sort all of this temporal copying/time-shifting mess sorted out… alone. And slowly.

A few levels into the preview build, in the Great Clock Sector (the birth place of Clank), is when I was re-introduced to the temporal recording game mechanic. A helper robot named Sigmund — who seems to know more about Clank’s past and creator, Orvis, than even Clank does — held my hand to get me started. To begin, I was placed in a large room with a single door straight ahead of me, and a big red button on the ground. Stepping on the button opens the door ahead of me; stepping off of it closes the door. First gamer instinct: I gotta find a box to drag on top of this thing. The problem here is there are no movable boxes in sight.

Sigmund shows me what to do, pointing to two other pads — a green and a blue. By stepping on a pad and pressing the triangle button, a radial menu pops up giving you a few options, among them is recording your movements. I step on the blue pad, begin recording, and move to the red button which causes the door to slide up and open. Pressing, triangle again stops the recording and I automatically zip back to where I originally started. Next up, I was moved to the green pad, which gave me the opportunity to create a second recording while also triggering my first recording. By doing so, my first recording raced to the red button, and as the door opened I was able to run past the open door. 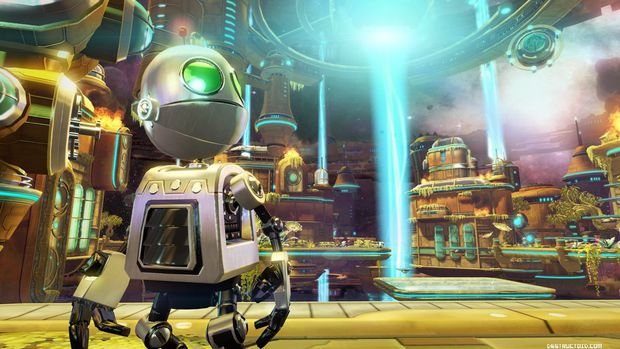 Confused? It certainly makes more sense when doing it than reading about it, that’s for sure. But you’ll soon find that these types of puzzles can get even more complicated, adding more pads and having the player make multiple Clank recordings. One particular puzzle required a single Clank temporal recording to step on a button to raise a platform, a second one to make it to said platform before it’s raised so it can reach another button to open a door, and then a final recording to navigate a series of spinning rings. (Clank uses a time-stopping grenade of sorts to slow them down; because you can only throw one at a time, the tricky part comes in deploying another bomb after you’ve hopped off the first, slow-moving spinning ring.)

Going back to my original “I should have to push a box on this button” veteran gamer instinct, these type of temporal recording puzzles felt new and exciting (albeit initially confusing). In many ways, it reminded me of the gameplay mechanic of Portal — simple in theory, but lends itself to layers of puzzle depth. If Insomniac wanted, they could get pretty damned trick with the temporal recording stuff, adding a handful of recording pads to a more complicated puzzle. From what I understand, temporal puzzles that are required for game progression won’t get more complicated than a few pads, buttons, platforms, and what have you. However, more complicated (optional) puzzles may be introduced for off-the-beaten-path collectibles.

Whether or not every type of gamer will take to this kind of gameplay remains to be seen. Still, while I was certainly left scratching my head at a few of the puzzles, it was definitely a nice break from moving a box. Or shifting a mirror to reflect light. Or turning some cranks.

Coupled with the already solid third-person action Ratchet gameplay, new space exploration modes, and near-Pixar quality visuals in a videogame, Crack in Time could be the most fulfilling Ratchet & Clank title to date. Crack in Time is certainly one of my most-awaited titles this fall, and I’ve gone ahead and drawn a crude picture of Clank on my calendar in anticipation for this October.