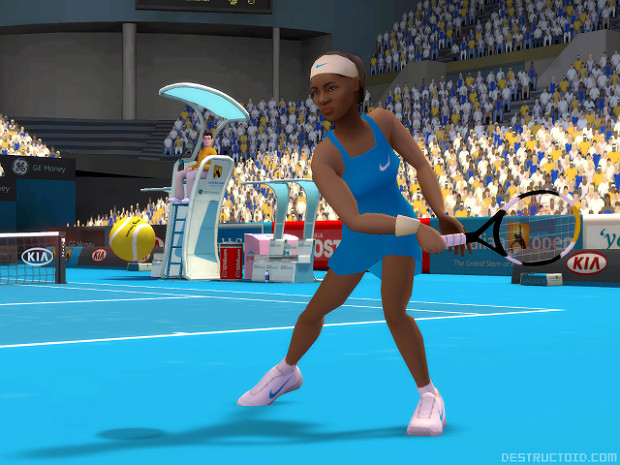 It’s rare for a sports game to have more than one cover athlete, but EA Sports is bucking the trend with Grand Slam Tennis for the Wii, which will feature tennis greats Roger Federer, John McEnroe, and Serena Williams on its cover. You can gawk at the box in the gallery below, where you will also find a screenshot of each athlete. (I know they’re distorted to 16:9 from 4:3, but that’s how EA sent them out.)

A press release accompanied the images; you can read through it after the jump. It notes that this is only the North American box art; eight different regional covers will apparently be revealed shortly. Amazingly, Serena Williams is the first woman ever to appear on the cover of an EA Sports sim (I’ll bet her sister Venus is seething with jealousy). The press release also teases the PS3 and 360 versions of Grand Slam Tennis, saying they will offer “innovative control systems and robust online” play; look for them this fall.

EA Sports Grand Slam Tennis will be released in North America on June 15th; in the UK, Sweden, Finland, Norway, Denmark, Spain, and Australia on June 12th; and everywhere else in the world on June 26th. Go to the game’s official Web site for more details; also available are gameplay footage and more screens.

REDWOOD CITY, Calif. – April 9, 2009 – Electronic Arts Inc. (NASDAQ: ERTS) announced today that tennis stars John McEnroe, Roger Federer and Serena Williams will be the North American* cover athletes for its new tennis franchise, EA SPORTS™ Grand Slam® Tennis. Eight different regional player partnerships will be announced soon. McEnroe, one of the sport’s most recognizable figures, was recently confirmed as exclusive to the game. Federer and Williams are among the biggest names in tennis and the most accomplished; having won 23 Grand Slam singles titles between them. Williams becomes the first woman to grace the cover of an EA SPORTS simulation product.

“It’s very exciting to be on the cover of EA SPORTS Grand Slam Tennis. This game not only shows EA’s enthusiasm for tennis but for also women’s tennis,” said Williams. “I know from experience how tough and gratifying it is to win all four Grand Slams so I hope people will enjoy the Grand Slam experience that is offered in this game.”

EA SPORTS Grand Slam Tennis is being developed under the EA SPORTS brand by EA Canada in Vancouver, B.C. Designed first for the Wii™, it ships to North American retailers on June 15th, one day earlier than the previously announced ship date. Worldwide it ships on June 26th with the exception of the United Kingdom, Sweden, Finland, Norway, Denmark, Spain and Australia, where it ships on June 12th.

This fall, EA SPORTS Grand Slam Tennis will also be served up for the PLAYSTATION®3 computer entertainment system and Xbox 360® video game and entertainment system from Microsoft. With stunning realism, it will feature innovative control systems and robust online** capability. Classic matches from the past will be recreated, along with simulated dream match-ups that weren’t possible before.

EA SPORTS Grand Slam Tennis for the Wii has been rated “E” by the ESRB and “3+” by PEGI, and has an MSRP of $49.95 USD in North America. For more information, log onto www.easports.com/tennis.

*In addition to select other global territories