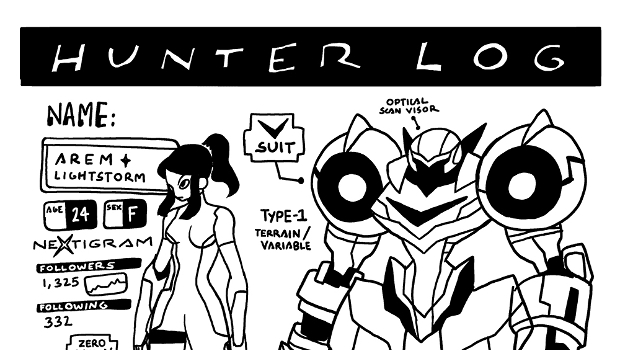 Way back when, Corey “Reyyy” Lewis wrote and drew a comic for Udon based on Capcom’s cult classic fighting game Rival Schools. It was canceled before the final issue saw print. The fact that it never got a proper resolution has bothered me for years. It was reportedly revived online a few years back, but the links to those issues are all dead.

Maybe Reyyy will be able to squeeze in a little Rival Schools closure in his next videogame-inspired work. That would make for quite a stretch, but it sounds like anything is possible in Arem, a one-shot comic rides the line between Metroid fan art and deft subversion of convention. If you ever asked to yourself “What if Samus from Metroid wasn’t so much a SPACE WARRIOR— but just a girl that really liked her INSTAGRAM and went around taking pictures of space creatures and foliage and gorgeous vistas”, then this is the story for you.

Reyyy has been wise to rename his character and make slight changes to her design. That should be enough to keep the lawyers at bay. Still, my emotional, irrational dream if for Nintendo to like this idea so much that they make it official with a Metroid Snap! spin-off game. Some of my favorite parts of Metroid Prime and Super Metroid are just being in the environment, observing the behavior of potentially harmless alien life. Giving us a whole game based on that premise would a hoot, as long as it didn’t take away from the development of a new 2D marquee Metroid title. That’s what we all want the most, right?