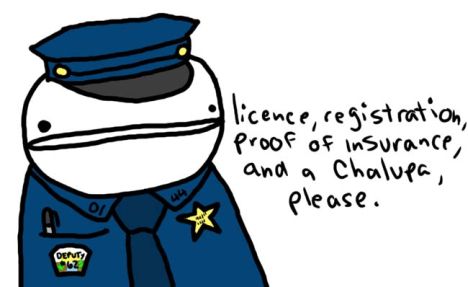 I might not have had it in me to laugh at a sadly oversensitive teenager killing himself over the Wii today, but I certainly can direct my scorn at Nassau County cops, who arrested a group of young teenagers that robbed someone outside a supermarket and claimed the kids were directly influenced by Grand Theft Auto:

Nassau County police cops have arrested six teens for robbing a man at a supermarket… The police add the teens arrested were emualting [sic] the characters from the video game Grand Theft Auto.

Police say later that night they were armed with bats and a crowbar and were walking down Stewart Ave. when they robbed a woman of cigarettes and struck a passing van with a bat.

Oh … so what you’re saying is, kids being sh*tty and destructive is the fault of GTA? Because last time I checked, rebellious teenage behavior dates back to James Dean — in fact, far before him.It’s awesome you did your job and all, but next time you want to try bashing videogames in the public eye, maybe try using some legitimate reasoning, asshats.

[Pic Via Natalie Dee, story Via GamePolitics — Thanks, Brian]