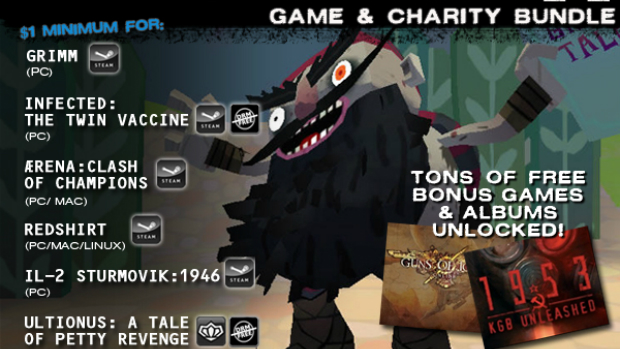 [Update: Contest over! Winners will be sent their codes via Dtoid PM.]

Our friends at Groupees have given us 10 codes for their latest Be Mine bundle to hand out to lucky Dtoiders!

Included in the bundle are codes for American McGee’s Grimm, Infected: The Twin Vaccine, ÆRENA: Clash of Champions (Early Access), Shufflepuck Cantina Deluxe, Redshirt, and IL2-Surmovik: 1946, plus bonus games, music, and other cool stuff! In addition, they’re also hosting an awesome tournament to give away an Apple II! Check it out!

To enter, just leave a comment in this thread telling me what the very first video game you ever played was, and on which system. Limit one entry per person, and you have until this Friday, February 21 Wednesday, February 19 at 11:59am Pacific to enter. Contest is open to anyone in the world.

Good luck! And don’t forget, our Huge members get automatic entry into all contests (as well as a bunch of other awesome perks). It’s pretty great!