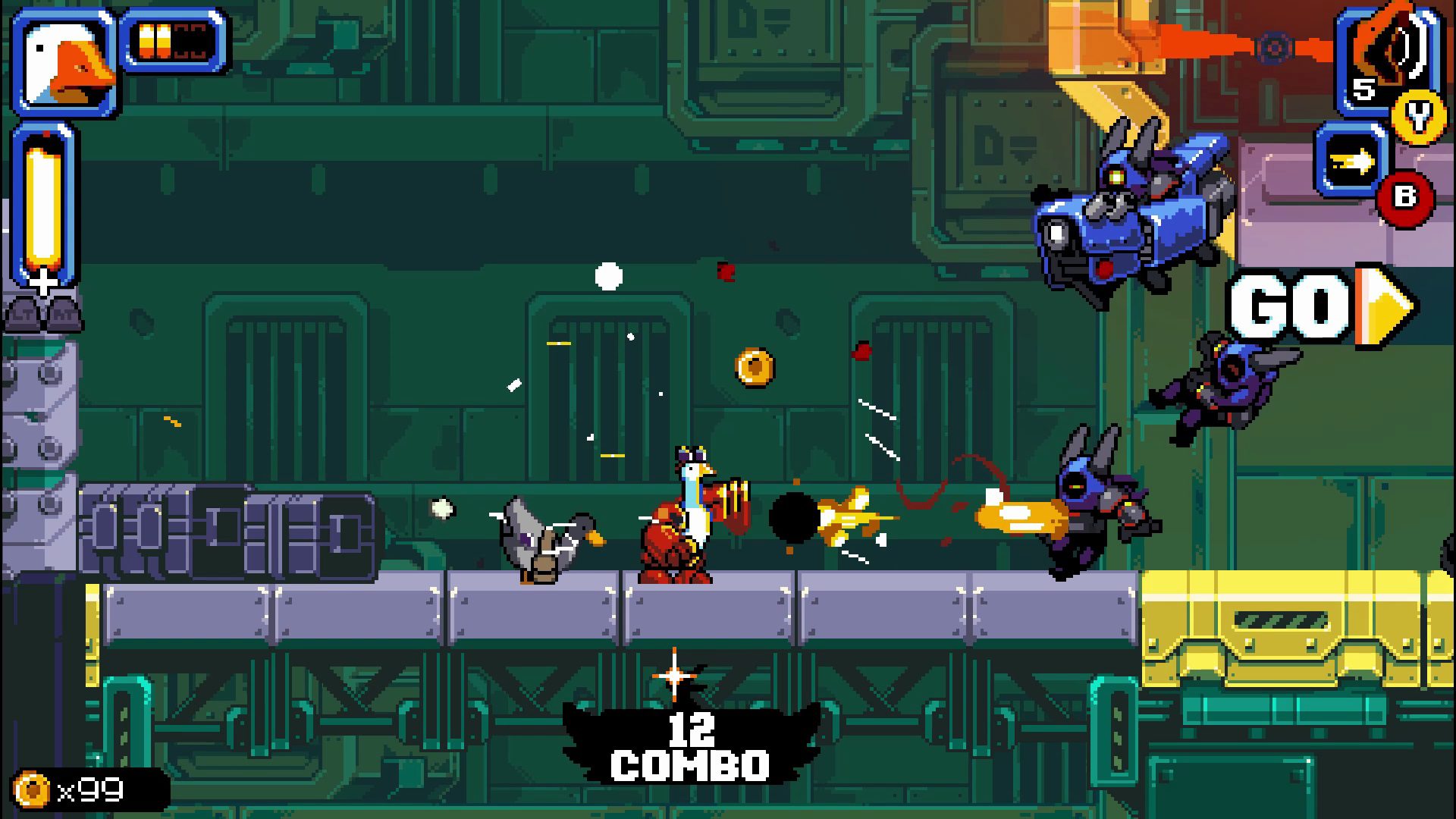 In today’s contest, you can win a copy of Mighty Goose for Switch, Xbox One, PS4, or Steam!

So I had a bit of an episode last month, and received a 30-day suspension from Destructoid. Apparently, you’re not allowed to spray paint “I AM HOT BISCUITS” all over the site owners’ cars. Yeah, I was pretty surprised by that, too.

Either way I’m back! And they can’t stop me from giving away games every now and again, despite how many times I use Limp Bizkit lyrics in my out-of-office automatic responses. Mighty Goose just hit digital storefronts, and I think you’re gonna dig this mashup of Metal Slug and unbridled fowl-ic fun. Win yourself a copy. It’ll be fun.

Geese are pretty much the entitled assholes of the avian order. They’re mean, they’re aggressive, they’re numerous, and they make that awful noise. They’re really a nuisance. But hey, we’ve gotten some good video games from them as of late! Well, here’s another.

Waddle, run, and gun through nine destructive levels clearing out high fidelity pixel art enemy bases so intergalactic nature can finally heal. Customize an honorable goose with a gaggle of gun arm upgrades and alternate ammo options to reunite the Mighty Goose squad. Rescue animal companions like Regular Duck to aid in combat with different and strategy-changing abilities like the Sprint Boots and Chonker Bombs.

The leader of team Mighty Goose is Mighty Goose, but his friends refer to him as Goose. As a professional avian space stalker, rivals are always bound to rear their ugly beaks, like fellow fowl Raven. The villainous Void King sends Raven and his army to imprison Goose’s animal friends in Void bases and take out the belligerently blaring bounty hunter for good.

Seriously, geese are on a real hot streak as of late.

To enter to win your copy, comment below telling us your platform of choice and what animal is next up to get its big gaming resurgence. Have there been any squirrel games lately? There should be. Squirrels are, objectively, the best animal in the animal kingdom. Objectively speaking.

We have five copies each for Switch (NA), Xbox One/Series X/S, PS4/5 (NA), and Steam. You can redeem Xbox and PS keys on current and last-gen consoles. The world is confusing so I guess I’ll respond to your comment if you won, then you’ll have to email me at [email protected] and then I’ll have to make a smoke signal to send your key. Just keep a lookout. We’ll draw winners this coming Friday.