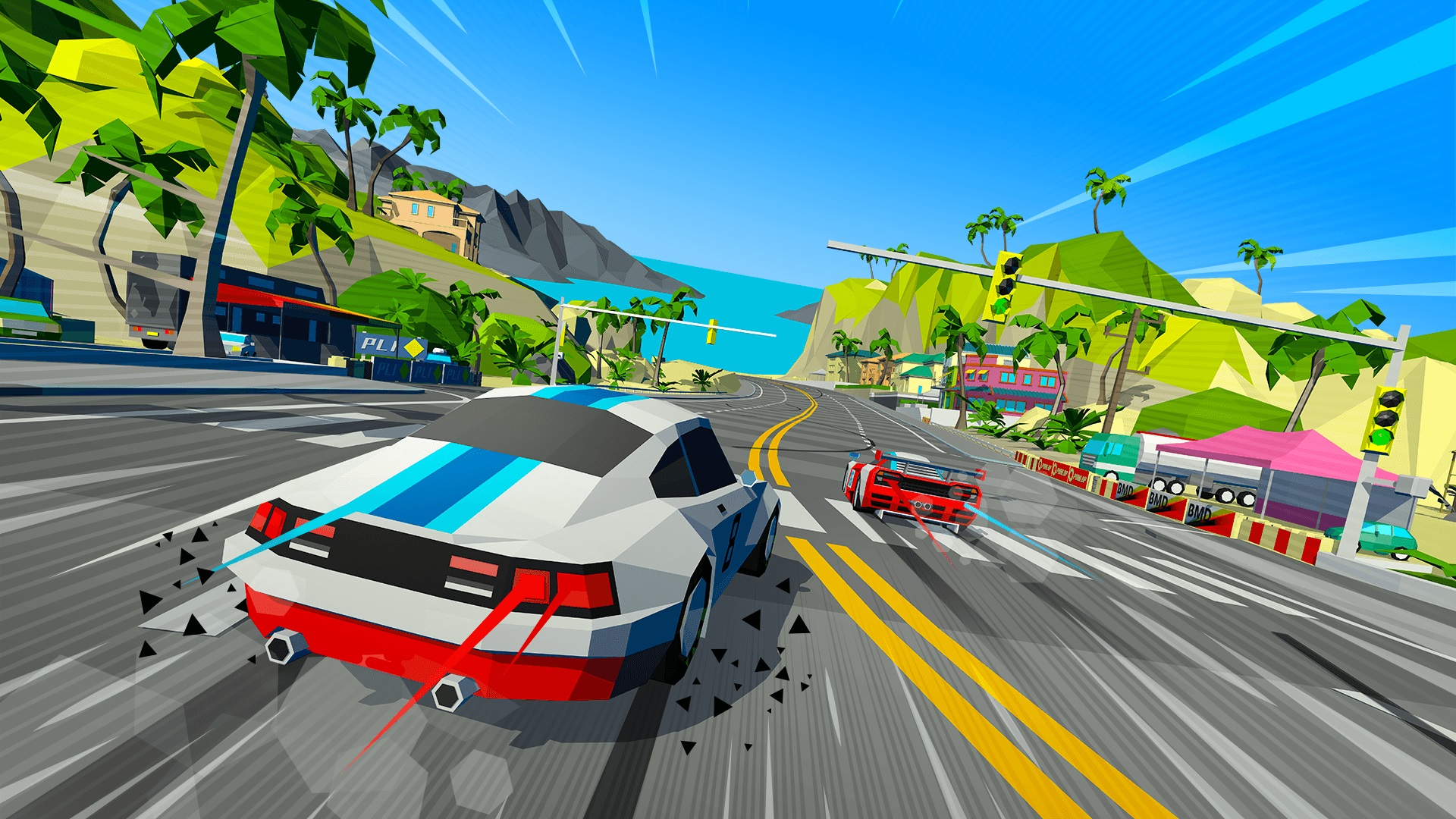 In today’s contest you can win Hotshot Racing for Xbox One, PS4, or PC!

Racing sims are for the birds — arcade games are where it’s at! If you disagree, find another contest, because this one is all about arcadey racer Hotshot Racing, which just hit PC and consoles. You know the drill, folks!

The ’90s are back with Hotshot Racing, the new arcade racing game from industry veterans who worked on classics of the genre. This polygon fest takes players around the world in fully re-imagined locations perfect for speed, drifting, and action.

RACE AROUND THE WORLD – Hotshot Racing features 16 tracks set across the globe with sharp corners providing technical yet enjoyable challenges. Take in coastal, jungle, alpine and Las Vegas desert environments, with each course modeled with the most vivid colors and blue skies for miles.

PLAY YOUR WAY (AGAINST AI, 8 PLAYER ONLINE and LOCAL 4 PLAYER SPLIT-SCREEN) – Time Trial and Grand Prix modes cater to those who like to compete in classic racing formats, while ‘Cops and Robbers’ and ‘Drive or Explode’ modes offer exhilarating new ways to play. Each mode is available in single-player, four-player split-screen and eight-player online, while Time Trial is single-player only. Smash lap records to rise-up the global online leader-boards or download ghost laps to match your racing lines against the very best.

ADDITIONAL RACE TYPES – In addition to classic single race and championship game modes, Hotshot Racing also features two new signature game modes; Drive or Explode and Cops And Robbers. In Drive or Explode players must keep their vehicle above a minimum speed which continues to increase at regular intervals. Drop below that speed and the car begins to take damage. Too little speed or too many bumps with your fellow competitors and BOOM – game over! Cops And Robbers is an eight-player game mode which casts players as law enforcement or criminals. The robbers need to flee their pursuers while the cops need to catch them. Each robber apprehended is immediately drafted into the cops in this frenetic yet fun game of cat and mouse.

They should really make Sandra Bullock an unlockable racer for Drive or Explode mode.

To enter to win, comment below telling us your platform of choice and what Sandra Bullock movie would translate best into gaming. Speed is clearly at the top of the list, but what others would work? This is totally ’90s.

We have eight keys each for PC, Xbox One, and PS4 NA; winners will be drawn Wednesday, September 16. Make sure to comment using a Dtoid account with your current email address on file. If you’re new, sign up here to get your Sandra Bullock on with us.

Hotshot Racing is available now for Xbox One, PS4, and PC.