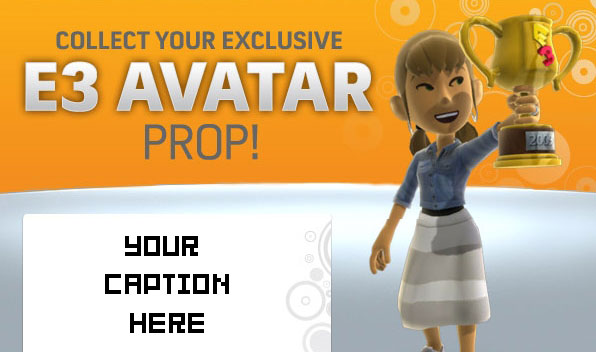 Back at E3 when Microsoft officially announced props for Avatars, they teased press with the chance to win an exclusive prop. Well, the prop has arrived — it’s an E3 2009 trophy!

Yeah, that’s it up there. We won one. Since there’s like a billion of us who work here, we decided to stop all of the fighting and give it away on the site to one reader. Lucky you!

Here’s how you win: Simply think up a caption for the above image. It could be something the Avatar is saying, for example. Our idea was “YOUR CAPTION HERE,” which is not really funny or creative. You can do better than that, we think. Post your entry in the comments.

We’ll pick a winner tomorrow at 12:00 PM Eastern, and your first entry/comment will be your last, so make it count!