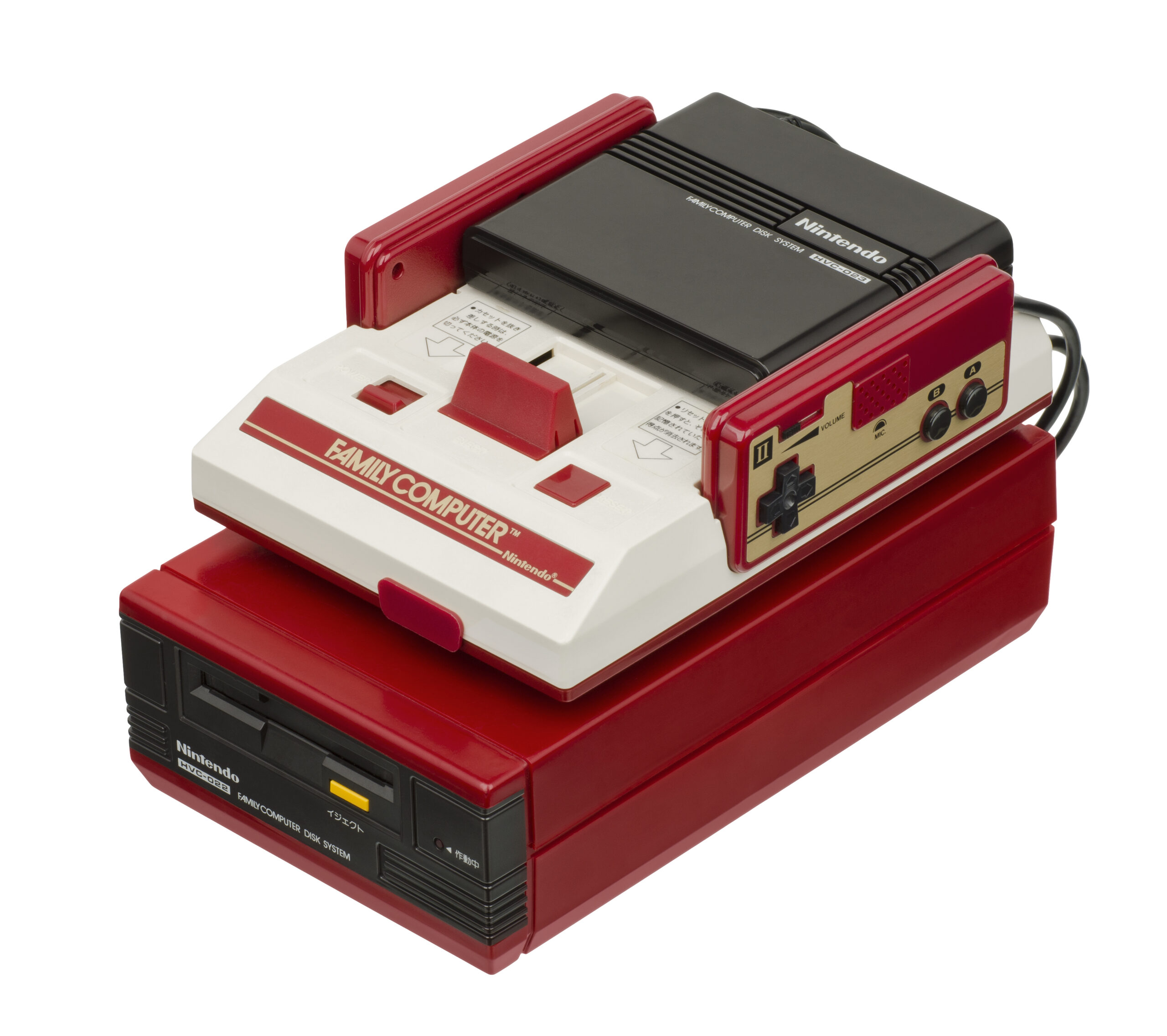 [With all the mini consoles being announced, both official and unofficial, it’s fascinating to hear about what was essentially the NES in Japan, except not really. But don’t listen to me prattle on about what the Famicom Disk System was or wasn’t. Get schooled on it courtesy of Adzuken. ~Marcel Hoang]

The Nintendo Entertainment System was a landmark console in North America. It revitalized a faltering marketplace following the video game crash of 1983, and it created the console ecosystem that we enjoy today. Without out it, the industry would be a very different place. At least on this side of the pond.

In Japan, the NES was known as the Family Computer, more frequently referred to as the Famicom, and it hit the market two years before the NES in 1983. If you’ve never dug into its library, I can tell you that it’s almost an entirely separate console from the NES: similar hardware, but a completely unique personality. For an incredible example, take a look at Konami’s offerings that never made it across the pacific. Here, we received classics like the Teenage Mutant Ninja Turtles games, Gradius, Contra, and Castlevania, but we missed out on a massive plethora of great titles.

From the Ganbare Goemon series, to ports of arcade titles like Parodius, oddballs like Moai-Kun, and even the Konami Wai Wai World series, which mashed together characters from their best titles. Heck, Konami even had the freedom to create their own custom mapper chip that allowed them to make graphical showcases like Lagrange Point. Like I said, it was a completely different world over there.

Another major difference the two regions had was the release of the Famicom Disk System, which had no similar counterpart over here. It was, in essence, a floppy disk drive that connected to the Famicom using a beefy RAM attachment that was plugged into the cartridge port. Slot a disk in, listen to it whir, and jump into a world within a world.

A WORLD WITHIN A WORLD

The story of the disk system starts with the size of an Famicom cartridge, not physically, but in what it could hold. In 1983, a Famicom’s cartridge could hold somewhere between 8kB and 32kB of data, which is teeny-tiny by today’s standards. This web page couldn’t fit on one of those cartridges, for example. They were also prohibitively expensive for both consumers and publishers. In 1986 Nintendo provided an alternative in the Famicom Disk System.

A Famicom disk could hold somewhere in the realm of 112kB of data and was significantly cheaper than cartridges. In addition to this, kiosks were distributed to stores around the country that would allow users to write new games to their disks for the cost of about 500 yen (roughly five Canadian loonies). If someone finished a game, or didn’t like one that they bought, they could re-write it for cheaper than a new game. They were also double-sided, and a few games only used one side, so two games could be copied onto the same disk. I personally have a copy of Super Mario Bros. 2 that has Othello copied on the B-side. Some games were even exclusive to the kiosks, such as All Night Nippon Mario Bros., a version of Super Mario Bros. based on a popular radio show.

Speaking of writing games to the disk, the system was also capable of saving user data to the disks. The result of this was games like The Legend of Zelda and Metroid, which over here had either a battery backup on the circuitboard or a cumbersome password system, but on the FDS, it could just be written straight to the disk. Most games used this feature, even if it was just for saving high scores.

TRAPPED ON A MAGNETIC DISK

The Disk System saw somewhere in the realm of 230 games release on it. A lot of the more notable titles, such as both Legend of Zelda games, Metroid, and Castlevania 1 and 2, were converted to cartridge and released in North America, but there were some that never made that leap.

Of note, there was Super Mario Bros. 2. The “real” Super Mario Bros. 2, known in the west as the Lost Levels, which was deemed too challenging for western audiences. In its place, we got a flipped version of Yume Koujou: Doki Doki Panic with its lead characters switched to Mario and the gang. Most westerners aren’t even aware of the switch; our Super Mario Bros. 2 just seems like an oddball for the series. Doki Doki Panic, on the other hand, remains trapped on disk, but that’s a story for another day. There were also games like Famicom Grand Prix and its sequel, 3D Hot Rally. From Konami, there was Ai Senshi Nicol and Bio Miracle Bokutte Upa, the latter of which was also released on cartridge, though that version is pretty rare.

The biggest difference when it comes to library would be in the presence of visual novels, a genre which never really caught on over here. In Japan, however, there was a plethora, but few ever landed on a plastic cartridge. The FDS, on the other hand, was a hotspot, with even Nintendo contributing to the genre with games like Famicom Tantei Club and Time Twist series. The lack of an NES equivalent to the FDS could be the reason why these types of games were never even offered in North America aside from the odd exception, like Princess Tomato in the Salad Kingdom.

So, what happened to the Famicom Disk System and why didn’t we ever see anything like it over here? The answer to both those questions is pretty similar. The FDS was founded to address the prohibitive cost of ROM chips, and by 1986, when the FDS was released, prices were already dropping. When the opportunity to create a regional equivalent even presented itself, it was already essentially unnecessary. Nintendo of America was also extremely paranoid about piracy and third-party production, and the FDS was pretty easy to mimic. Its authentication technology was purely physical, with certain letters in the “Nintendo” logo at the bottom of each disk being heavily indented, only reading disks that had similar indents. As you can imagine, it’s not hard for bootleg manufacturers to replicate such a form factor.

In Japan, it held on for a long time, with the last game landing as late as 1992. Variations of the Famicom were released by partner companies like Sharp that had built in disk drives. However, after 1988, releases for it became much less frequent, allowing the system to slowly fade out.

It didn’t help that the FDS itself is prone to failures. The most common of which is the drive belt turning to tar with age and wear. I have one of the above mentioned Famicom Twin consoles, and the drive came requiring a new belt. Taking it apart and putting the new belt in is relatively easy, but re-calibrating the motor and read/write head afterwards is the tricky part. While a normal floppy disk writes its data in clusters, a Famicom Disk is written sequentially in a spiral, which means the head and the motor have to be moving in sync for the data to be read correctly. Too fast or too slow results in read errors, and that means the game won’t load. Nintendo in Japan would repair these units up until 2004, but you’re on your own these days. After something like 8 hours on the inside of one of these devices, I feel I now know them inside and out.

The disks themselves are also fragile things, as is all magnetic storage. Like any floppy disk, it runs the risk of being deguassed; having its data completely wiped through loss of magnetism. There was also no slide on standard disks, so debris could get inside and cause issues. Anecdotally, of all the titles I’ve bought for the FDS, only one side of one disk has failed to work for me, but the possibility is always there.

Hardware-wise, there wasn’t a tremendous difference. The FDS accesses an extra sound channel that was hidden away on the Famicom (and partially removed from the NES), which provides soundtracks like Metroid with a bit of extra depth. Interesting, but hardly significant. The fact that the drive frequently has to move data from the disk to the RAM cartridge also means that every game has load times, now. Most games only need to load once or twice, but it is still a marked disadvantage to the medium. 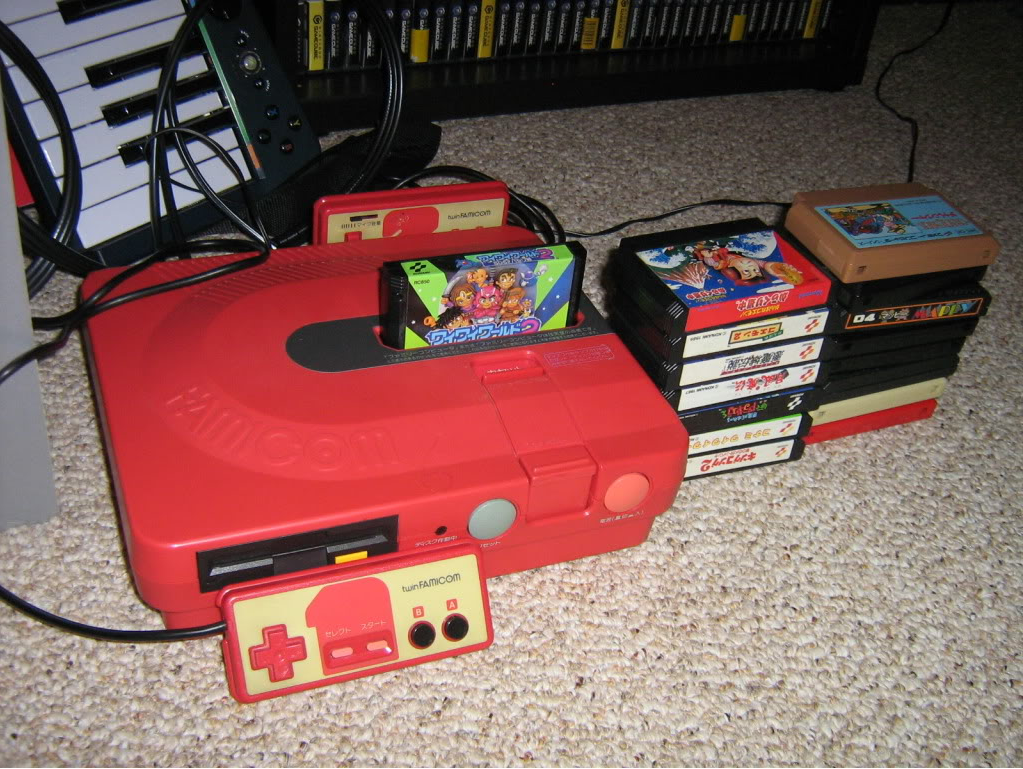 My personal Famicom Twin. It has a built in disk drive.

It’s a shame that the Famicom Disk System never made it to North America, as it was a nifty and fun little device. Like the Famicom, its library has a flavour that sets it apart from similar consoles of the day. Both Sega and NEC would later attempt to duplicate the FDS’ success with the Sega CD and CD-ROM²/Turbografx-CD, respectively. Both would accurately anticipate the coming of the optical media shift, but neither managed to truly meet the success of the FDS. Nintendo themselves nearly had an optical drive for the Super NES, but it was famously canceled. They then released the 64DD for the Nintendo 64, which flopped hard, but that’s a story for another day; a day where I have $1500 to import one. Want to spot me?

If you have the means to import a Famicom Disk System, and you have a taste for the 8-bit titles of yesteryear, I recommend doing so. The Disk System provides a physical experience like no other. On the other hand, I would warn that aside from being a historical curio and a neat device, there’s very little practical reason for owning one. It would be a different story if landmark titles like Zelda remained locked on those yellow rectangles, but almost every significant game was ported to cartridge. Even Nazo no Murasame-Jou was later released on Nintendo’s Virtual Console service as The Mysterious Murasame Castle, scrubbing that little gem.

Even still, there’s something about hearing that BIOS screen start up, slotting a plastic disk, then hearing the drive whir to a final click. It was a major facet of the Famicom experience in Japan, and it’s an experience that westerners like myself missed out on.

This article was originally posted on my personal blog, the Game Complaint Department.