Medieval era Europe was time of great strife and hardship. With disease, war, and social unrest plaguing the lands, ruling the lands during such times must have been quite an ordeal for those in power. For every great civilization, there needs to be a leader. Do you think you’re up for the challenge?

Kalypso Media has got another title set in the era, and this one seeks to take city-building and resource management to a whole new level. With an increased focus on scope, Grand Ages: Medieval seeks to place players in the role of a ruler who must make the hard choices for good of his kingdom.

During the Medieval era in Europe, you take on the role of a ruler from a small town. Eventually, you wish to expand your power and resources, and look to establishing more settlements and territories throughout the known world. But eventually, you come into conflict with other would-be rulers from other territories such as the Mediterranean and the Middle-East, who want the same thing as you, complete power and control.

Of course, as a civilization building title, the central plot is very light, leaving the ‘story’ to be created by the actions of the player. How you choose to build your empire is up to you. Do you wish to be ruthless tyrant who will take settlements and towns by force? Or perhaps will you focus on establishing communities to take advantage of nearby resources. How you choose to expand your power is up to you, and your choices will shape the civilization.

By far, one of my favorite aspects of Grand Ages was the visuals. From the beginning, you’re placed on a fairly isolated area of the map, and you must explore the world to acquire new territory. As you venture out with scouts, you clear through the fog of war, which keeps places hidden from the over-watch view, to uncover neutral settlements or valuable resource areas. While you can keep the camera zoomed out, you can move and observe the world on the ground level, and world is rich with detail. You can look into thriving cities or observe raging battles between rival kingdoms.

Moreover, Grand Ages also supports 4K resolutions, which will allow those with a desire to see every rich detail of the game space to view it in all its glory. The entire world is one seamless space that has no loading or hiccups whatsoever. When you first pick up play, I highly recommend zooming out to get a sense of how massive the world is. And given the size of the game space, you can expect to spend plenty of time exploring and plotting against other kingdoms. 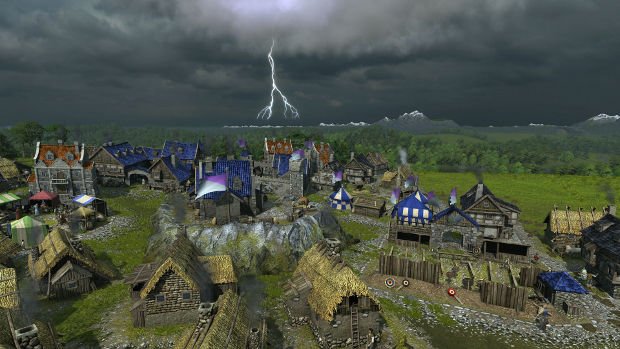 While I didn’t get to experience much of Grand Ages: Medieval, I was impressed with the small taste of this city-building experience. Though they didn’t elaborate more on the multiplayer mode, you can play against others within the game space as you compete for resources and battle it out for territory.

Those looking for a unique take on city-building gameplay with a increased focus on exploration and settling new territory may want to keep an eye on this one. And with its release coming up much sooner than you’d think, you can look forward to experiencing another civilization simulator with lots of potential.