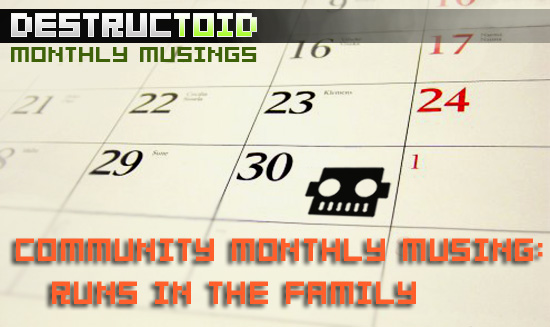 [Editor’s Note: Every month, the Destructoid Monthly Musing topic gives community members the ability to have their work posted on the Dtoid front page. This last month, the Monthly Musing series took a break, but members of the community brought it upon themselves to create their own topic and do their own May musings. Guncannon did a great recap of all the blogs that got posted — take some time to read them all. The official Monthly Musing series will return with a new topic tomorrow. Huge thanks to all the community members that set this up and participated!]

GamesAreArt introduced May’s topic: write about how games have been connected with your family. So far, there have been a handful of submissions, but I’d say this is a situation where quality definitely makes up for quantity. The cblogs have been relatively quiet this month, so every Musing has gotten a fair bit of attention. The variety is astounding, covering children with parents, parents with their children, and siblings. I haven’t seen one about gaming with grandparents yet, though I’m sure some of you have some interesting stories to tell.

Hit the jump to see what everyone came up with.

– Fame Designer started things off with an incredibly moving history of the gaming experiences he had with his late brother. I don’t remember seeing that many comments and faps on a non-frontpaged musing before!

– fightmejimmy presented a series of funny and touching stories, related to specific games.

– Tubatic kept things going with a look at the gaming relationship he has with his dad.

– Trust showed how gaming has affected every member of his family.

– Beyamor took a very creative approach with his musing, comparing him and his brother to Mario and Luigi.

– knutaf had a short, but sweet, story about how him and his sister were obsessed with Rayman. They even made their own Geocities site about the game! That’s some nice sibling teamwork.

– Xandaca combined his personal story with a broader musing on gaming in the family. I remember when my Mom got unusually addicted to a game (Bust-A-Move) as well.

– PvPPY wrote this musing, about gaming with his son, which really puts into perspective the different types of people that frequent Destructoid. Unfortunately, I think his post was stuck hours or days behind, thanks to the timestamping “glitch” on the site, so no one read it. Please do so. (I’ll update the link if he reposts it)

– SteezyXL has the most recent post, the first in a multi-part series on gaming in the family. He starts off at a detailed look at his gaming experiences with his brothers, and finishes it by talking about gaming with his dad and his cousins.

– Doctor m3ds shares how his dad got him into gaming, and the games he played with all his family members.

– Elsa has a fascinating and unique blog about her gaming experiences with her three dogs. It’s really touching, and shows that gaming can be meaningful in a way you probably never considered.

– Enkido finishes off the topic with a look at what each member of his family thinks of gaming and what kind of games they’re all in to.

Thanks again to everyone who participated and put this together!