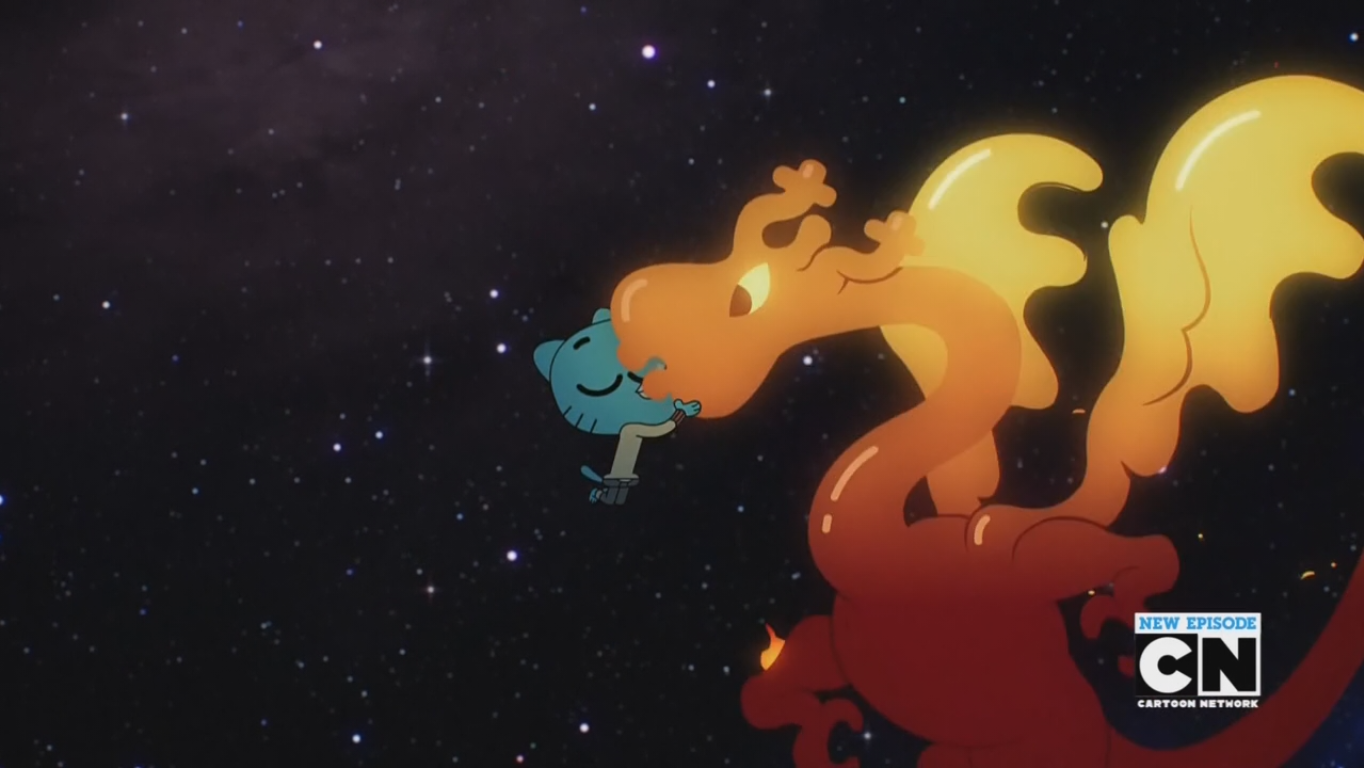 How are you folks doing? Good? Well, it’s about to get even better, because I’m here.

Welcome back to Comments of the Week, your weekly excuse to come and see the glory that is me. In addition to my handsome mug and amazing sense of humor, you can check out all of the best comments said by fellow community members such as you! After all, isn’t Destructoid the best damn community in the entire internet?

Of course it is, because I’m here. Anyway, as always, comments are placed into three lovely categories:

TRUTH: semen travels at an average of 28 miles per hours.

LOL: and here I thought submarines move faster than that.

WUT?: is there a word for reverse innuendos?

If you missed last week’s edition, then you must be starving! Why don’t you check out what happened last time on Comments of the Week right here, then double up with this tasty meal when you’re done?

From Five Nights at Freddy’s: Sister Location drops this October

From ‘Other surprises’ in store for NX, says Ubisoft

From Seaman creator Yoot Saito is getting back into gaming 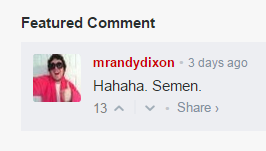 Dreamweaver: We’re all semen creators (women give birth to men too!). 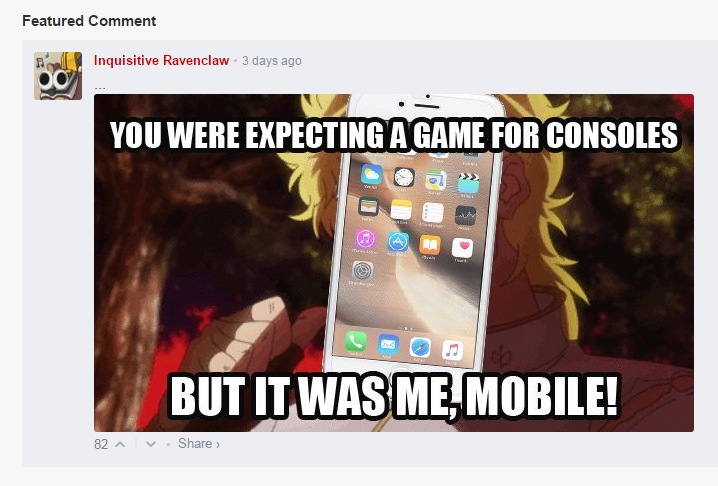 Dreamweaver: That’s also why nasty hookers are still in the market.

From Gone Home studio takes its voyeurism to space

Dreamweaver: Doesn’t quite roll off the tongue.

From XCOM 2 console editions delayed by nearly a month

From For all its changes, Resident Evil 7 still has healing herbs 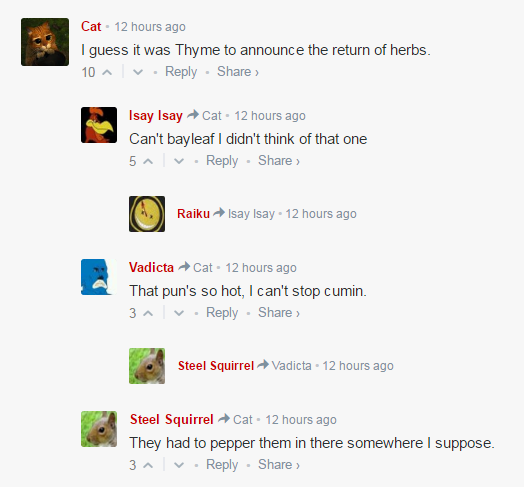 Dreamweaver: I hate every single one of you. Especially you.

From Prince Ali, mighty is he, now on GOG 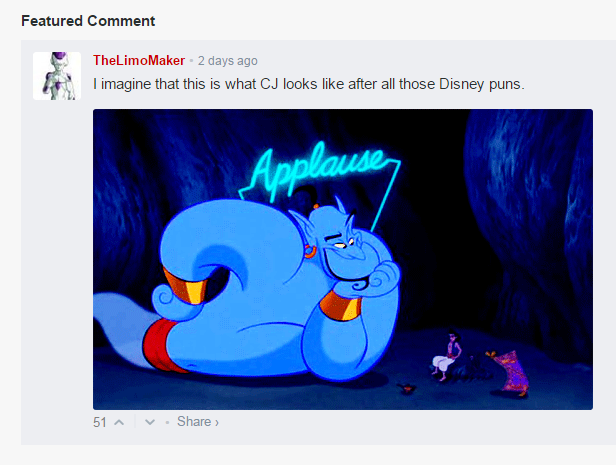 Dreamweaver: I think it just got gay in here. 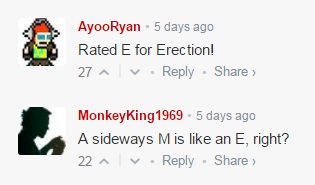 Dreamweaver: No, E’s look like blocky boobs from the side. M’s look like point boobs seen from above.

From Review: Xbox One S 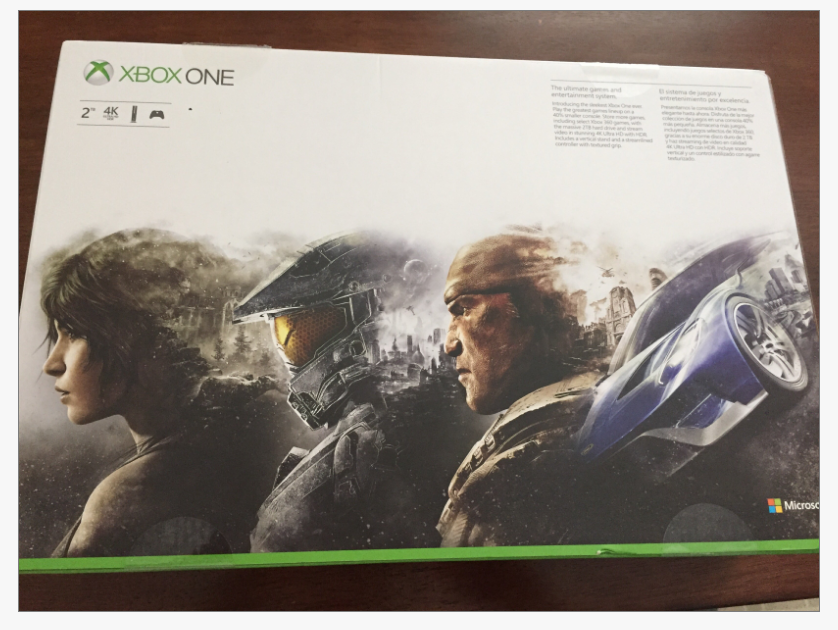 Dreamweaver: The car is the hero we deserve, but can’t afford right now.

Dreamweaver: I abzulutely hate you.

And I stole your pun.

Dreamweaver: Because they had to PokeGo to another state.

From Japanese Olympian got a $5,000 bill playing Pokemon Go in Brazil 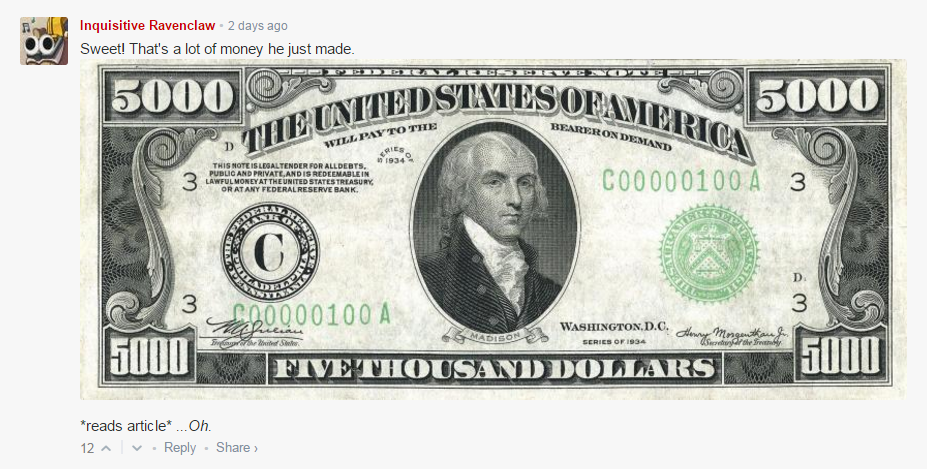 Dreamweaver: Who the hell is that guy, and why isn’t my face on the bill?

Actually, nevermind. I’m worth more than that anyway.

From Report: Nintendo will have a new NX Mario and Pokemon within ‘six months’ of launch 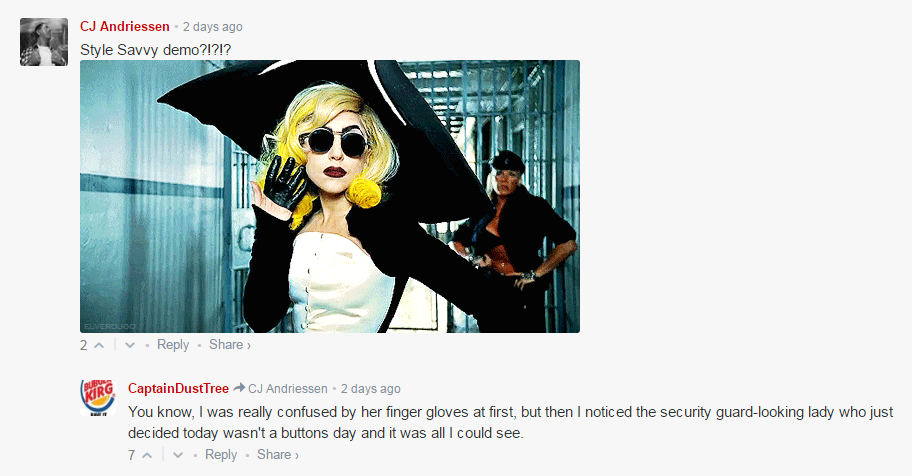 Dreamweaver: She could shove a baton up my baton.

From Criminal Girls 2 denied rating (and release) in Germany 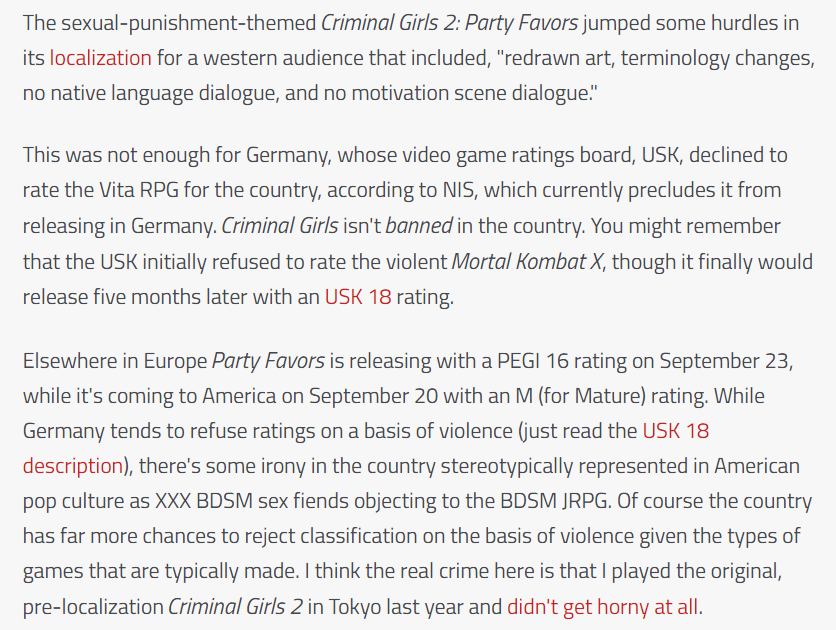 Dreamweaver: One of these days, that joke’s going to get old.

Dreamweaver: I found out the hard way that no retail stores in America sells Gal Gun: Double Peace, even GameStop. 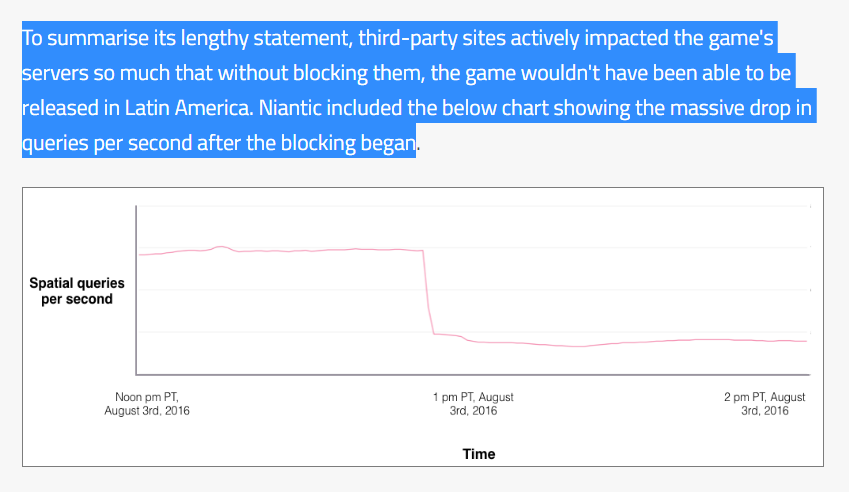 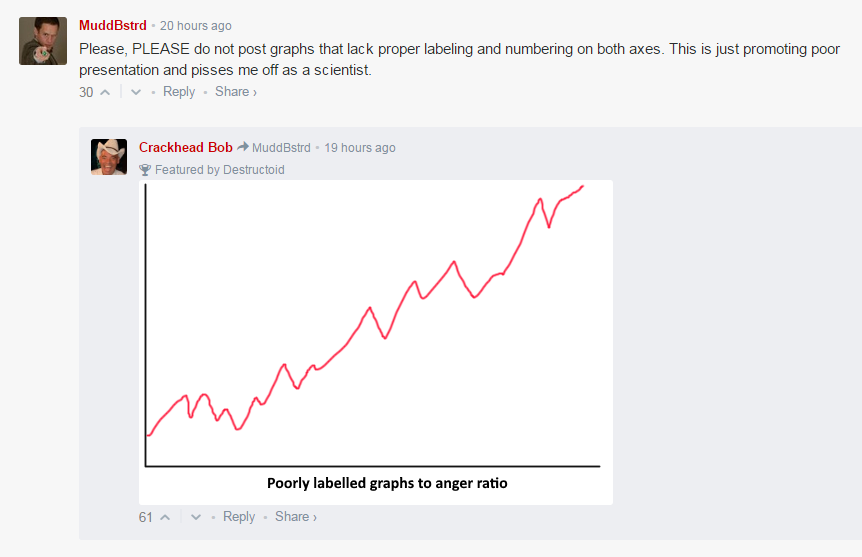 Dreamweaver: Looks like my odds of not getting laid as I grow older.

From Struggling to catch Pokemon in Go? There’s a ‘bug’

Dreamweaver: I thought we were the demons?

From These new Pokemon Sun & Moon forms are freaking me out 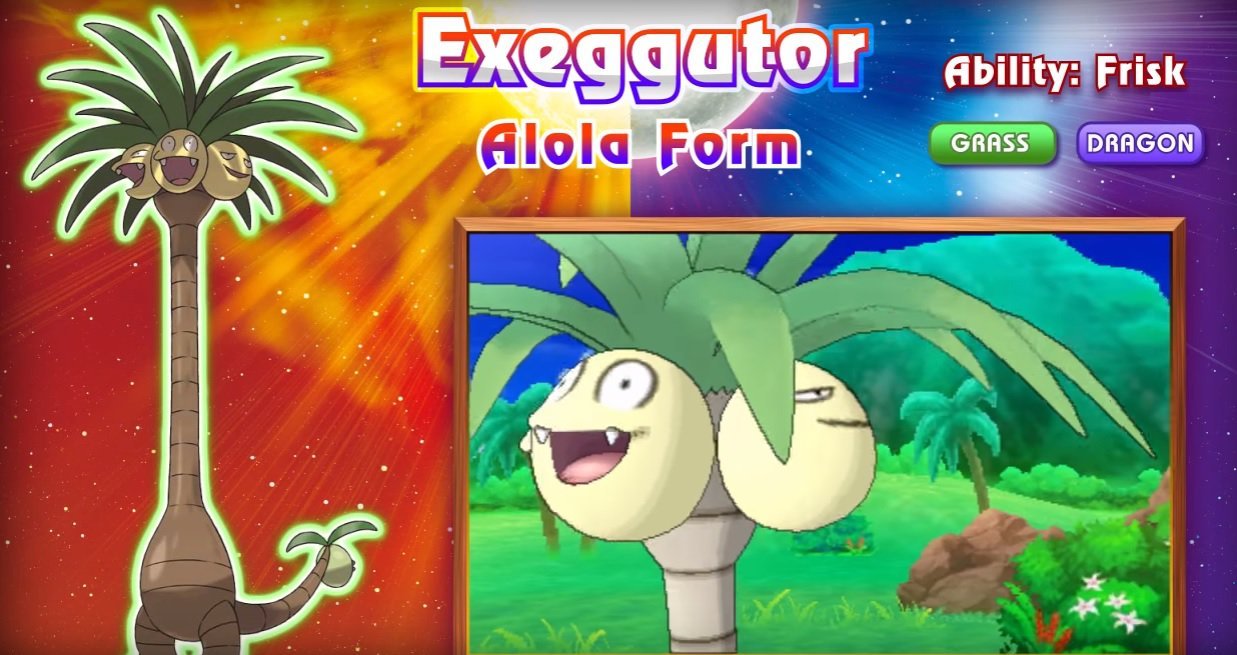 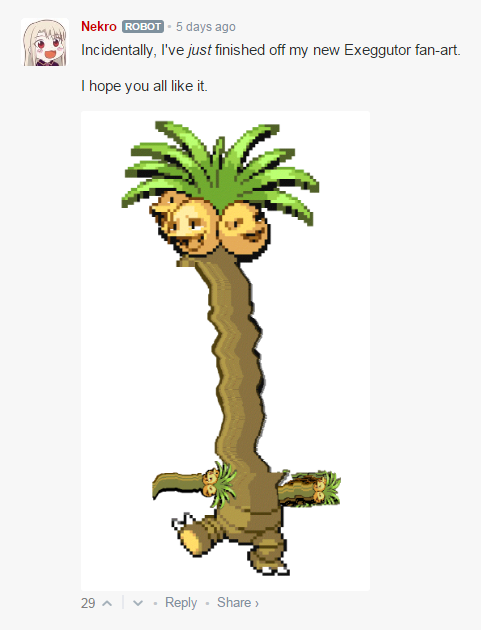 Dreamweaver: I don’t get it, so that must mean it’s a work of art.

Dreamweaver: No, you are wrong. It’s DSiWare shop, but I can see how you can get that confused.

Looks like he needs a DSeyewear shop, am I right? 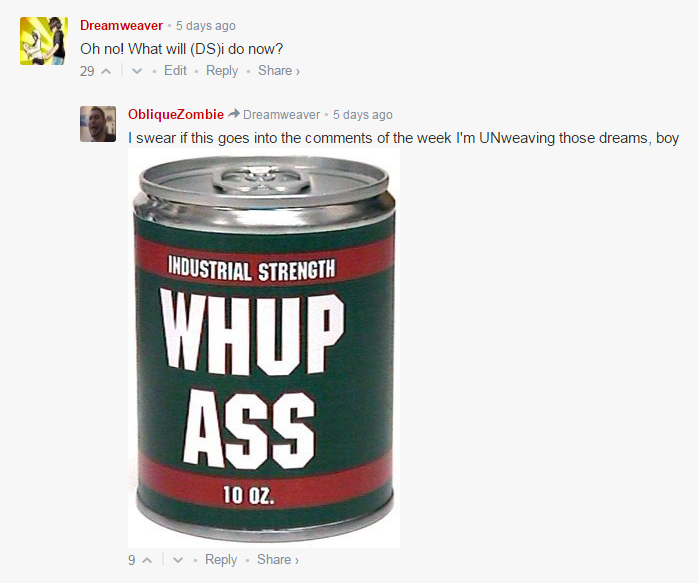 Dreamweaver: What you gonna do now!?

(I hope he opens the can. I always wanted to see what canned industrial strength whup ass looks like.)

From BioWare is shutting down all its forums outside of Star Wars: The Old Republic

Dreamweaver: It was infested with werewolves.

From Mobius Final Fantasy is out now in the west

From Niantic denies reports of a wild Pokemon Go Articuno 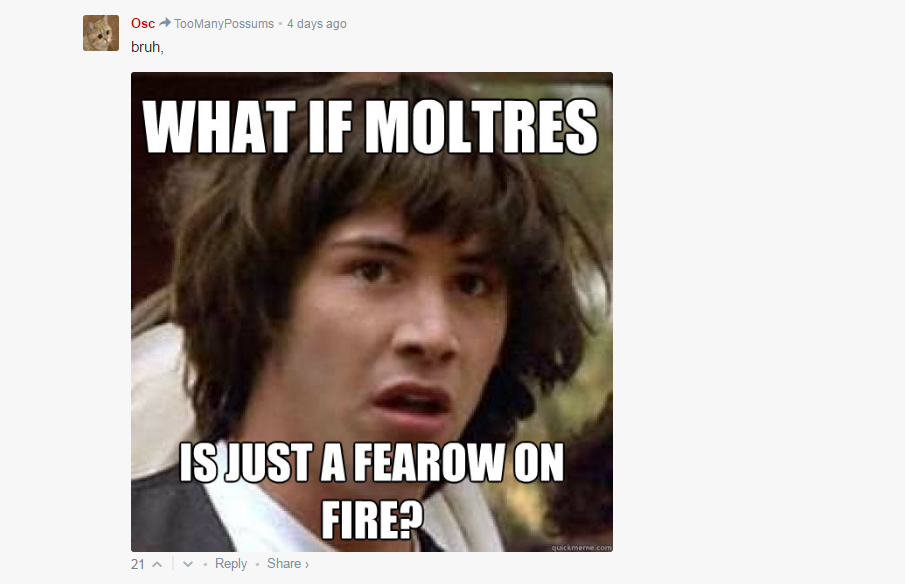 Dreamweaver: It’s still not a Moltres, but at least it’s dinner.

From I bought one of those Z-Ring hunks of plastic for Pokemon Sun & Moon, help 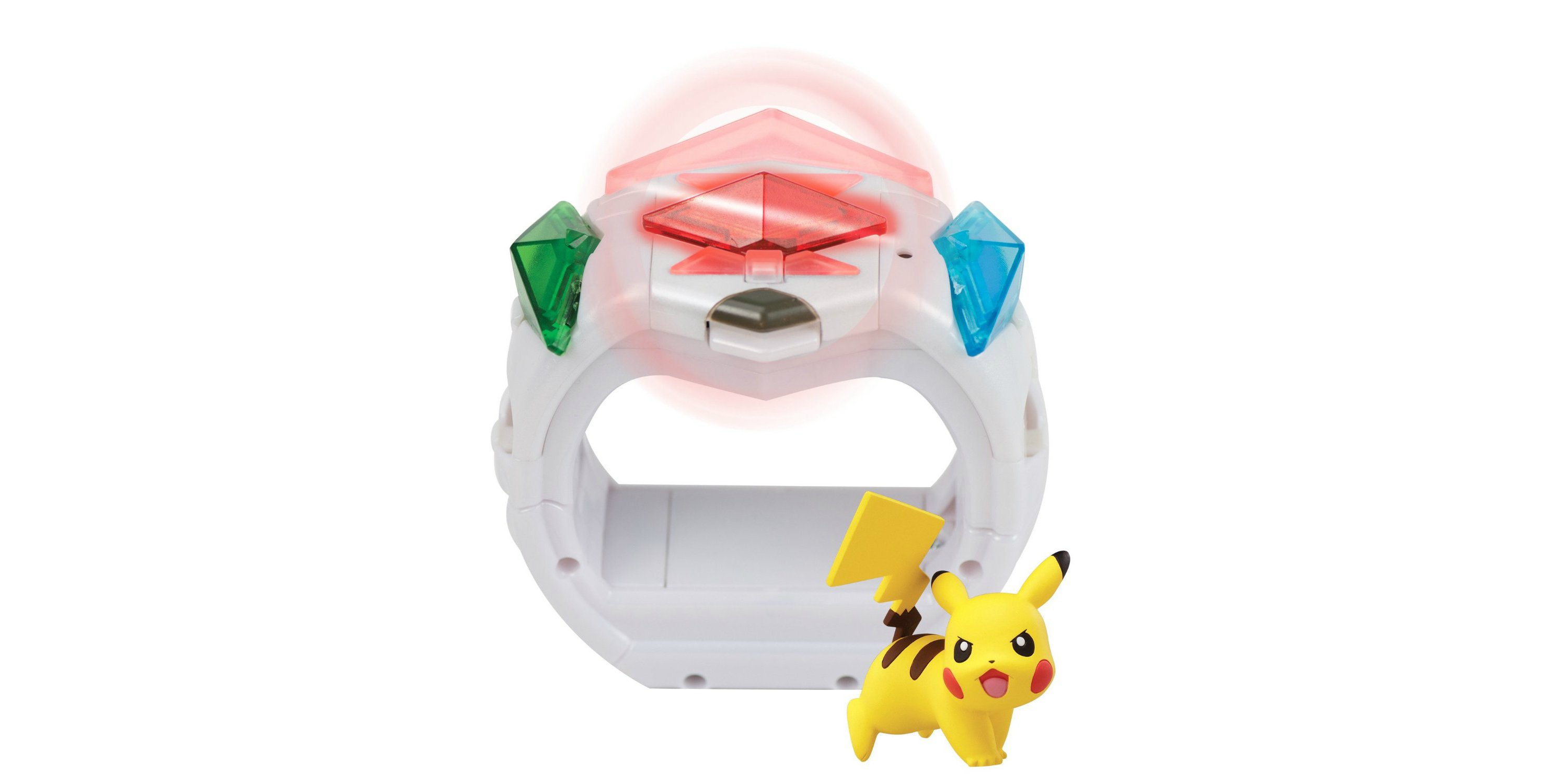 Dreamweaver: I’d shove it into a woman’s vagina so we can have glow-in-the-dark sex. 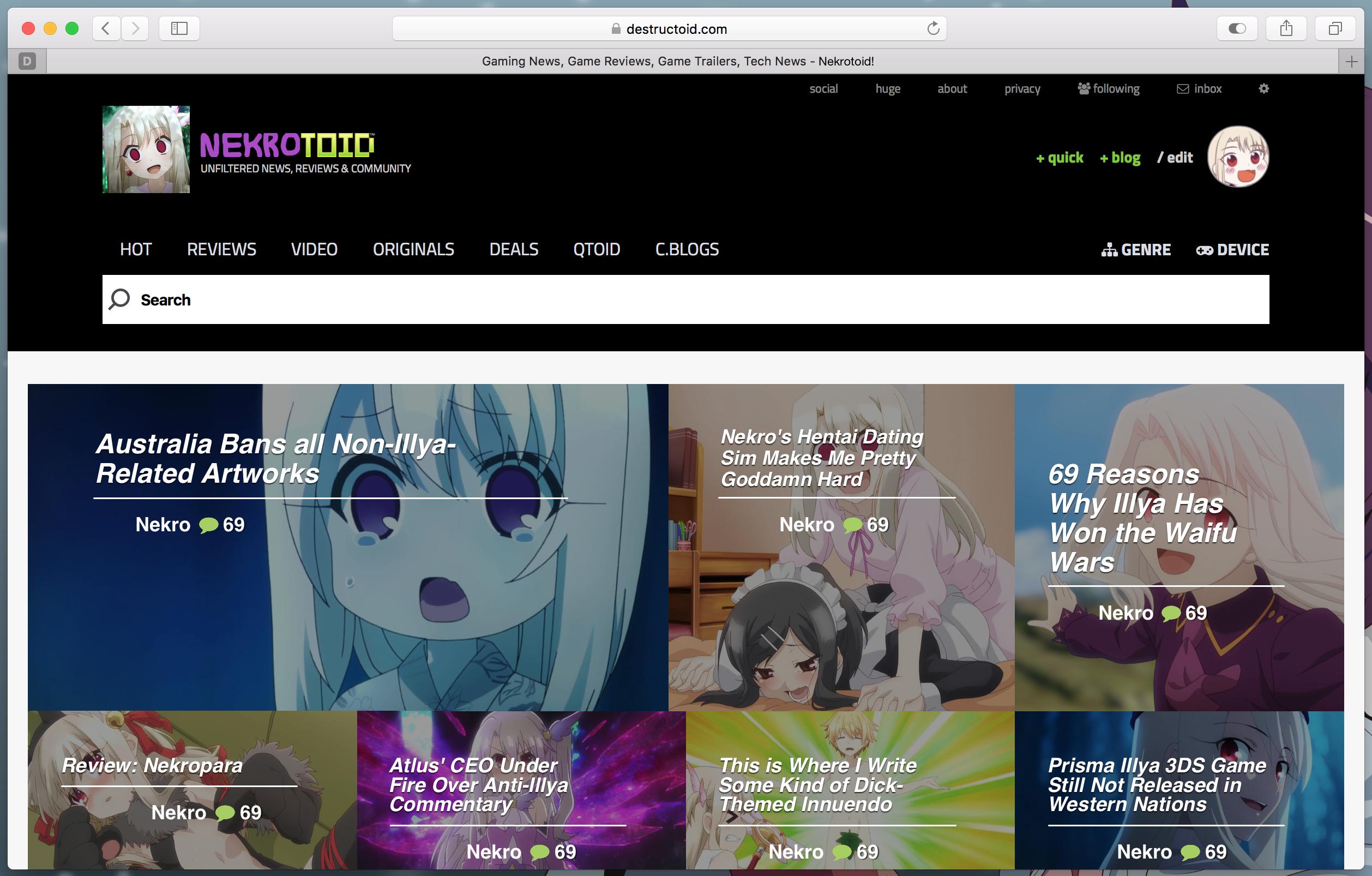 Dreamweaver: 7/10 – Too much Nekro, not enough Dreamweaver.

And that’s it for this edition, folks! As always, be sure to comment down below and let me know which ones were your favorite… one-liners by me. Because, because that’s why we’re all here, right?