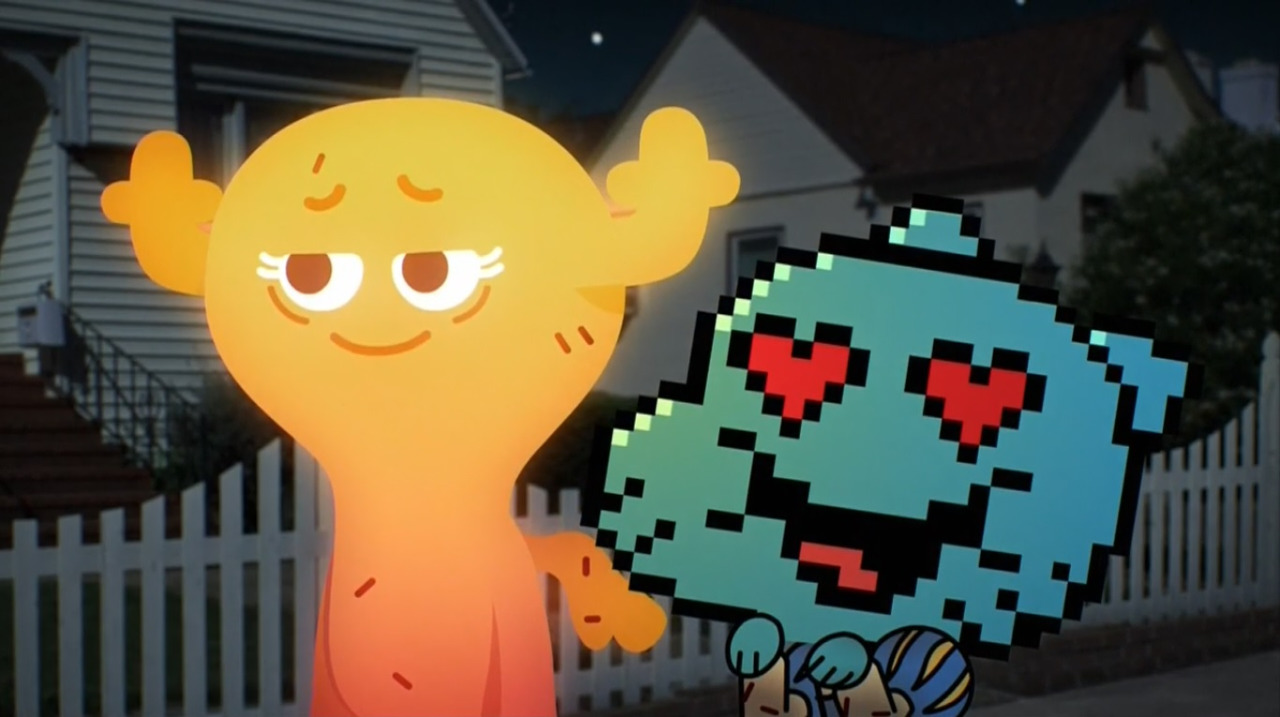 Hey, there, Destructoid! What’s good? What’s happening? You know that E3 was last week, so there’s a chance with all of the press conferences to watch, or all of the videogame news to follow, that you couldn’t have possibly visited every single article, much less the comment sections. I mean, you have to be some kind of no-life loser to go through all that.

Yo, that’s why I’m here! Welcome back to Comments of the Week! For those of you just joining us for the first or 74th time, this is THE community showcase that compiles all of the best comments that you, the people, have said over the week. So if you want to see just how funny and crazy we are so you know which one of us to keep an eye on (I hear that Dreamweaver is one perverted son of a bitch), or maybe you were one of the crazy people yourselves, then this is for you! As always, you can find comments sorted into three categories below:

LOL: it just shows that good business is all about location.

In case you missed last week’s version of Comments of the Week, you can check it out right here for all of your viewing pleasure. Man, is it just me, or are we all sexy beings?

From Is the Xbox One S Microsoft’s new console? 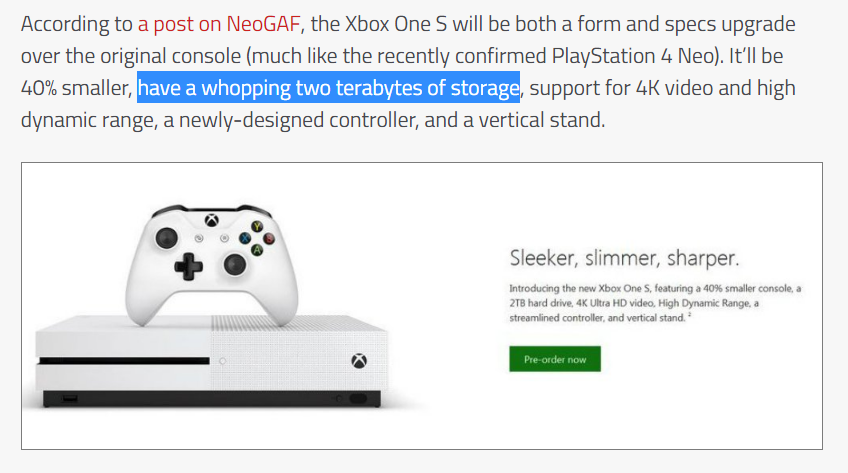 From Don’t Starve creators will announce ‘something new’ at E3

From Watch Dogs 2 looks alright, but do we really need a Watch Dogs film?

From The Legend of Zelda: Breath of the Wild will heavily focus on technology and loot

Dreamweaver: Saints Row says hi, but I see your penis.

Dreamweaver: Because it wouldn’t be Destructoid without Chris Carter showing up somewhere.

From PSA: A few of the new Mario amiibo might be rare

Dreamweaver: Because fuck you, I want in on this edition too!

From Are you picking up Shin Megami Tensei IV: Apocalypse?

Dreamweaver: What a coincidence: that’s the same poll used for “Would you vote for Donald Trump?”

From No, there is no female Link in Zelda: Breath of the Wild

Dreamweaver: So if I’m a vagina man… I’m also an ass man? Whaaaaaat?

Dreamweaver: There probably is, but who the hell goes into museums nowadays? 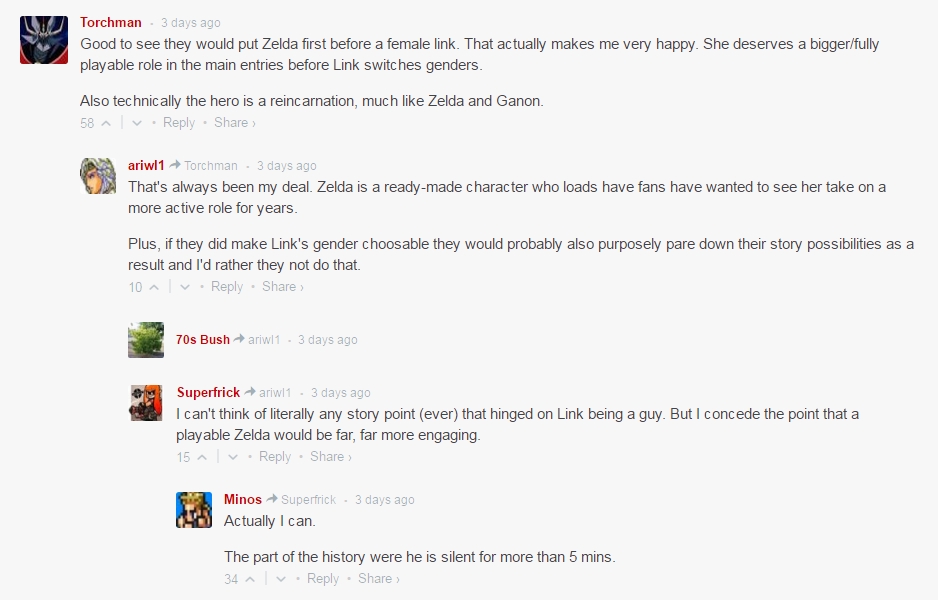 Dreamweaver: Too bad this isn’t Pokemon because that needs an Burn Heal.

From Resident Evil 7 demo is here, is PS VR compatible 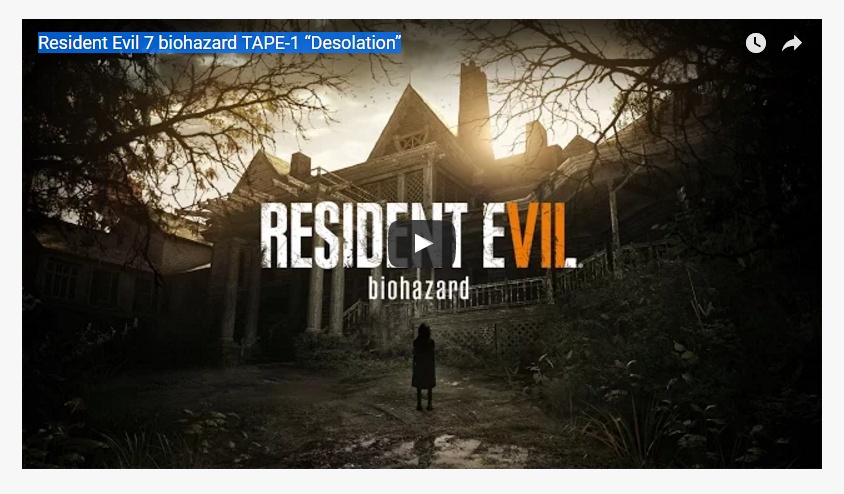 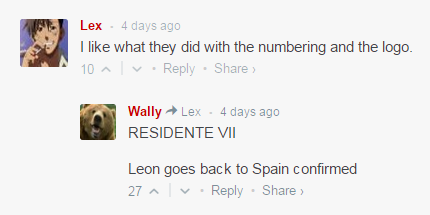 Dreamweaver: We both know Leon’s not allowed back in Spain.

Dreamweaver: That’s what I say everytime I drive by an orphan.

From As expected, Battleborn is getting microtransactions

Dreamweaver: Is she free this Tuesday?

Dreamweaver: Indeed. Lying only causes people to laugh at you. 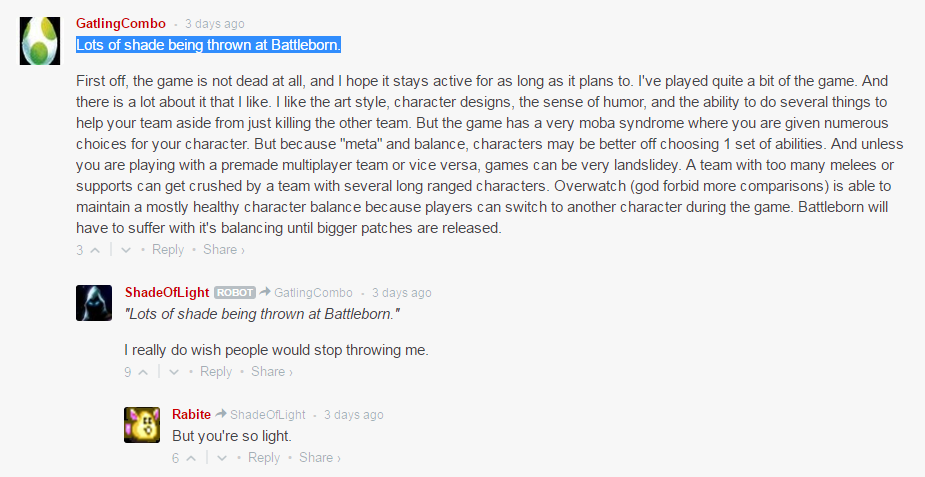 Dreamweaver: …I get it now!

Dreamweaver: Well, what the fuck am I? Chopped liver?

Dreamweaver: Get out, and don’t come back until NieR: Automata comes out.

From Digital Norman Reedus is a crybaby who holds stuff 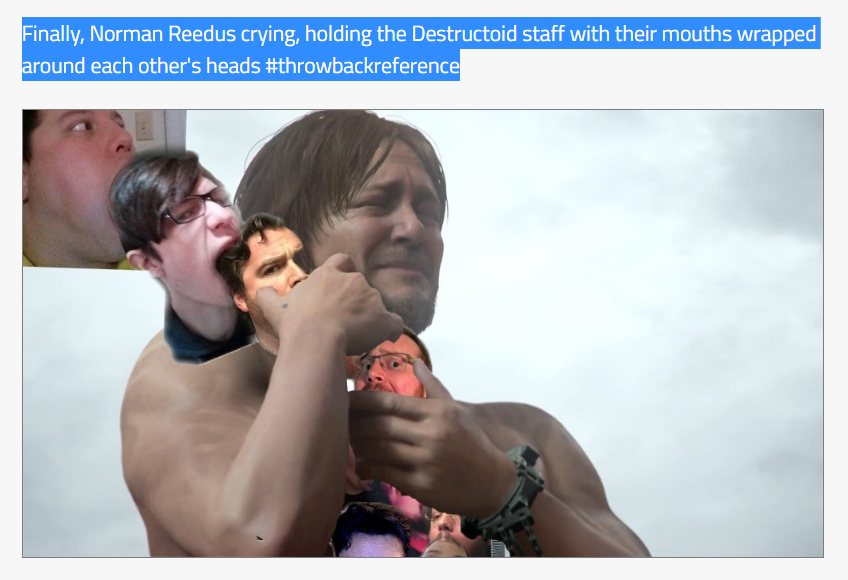 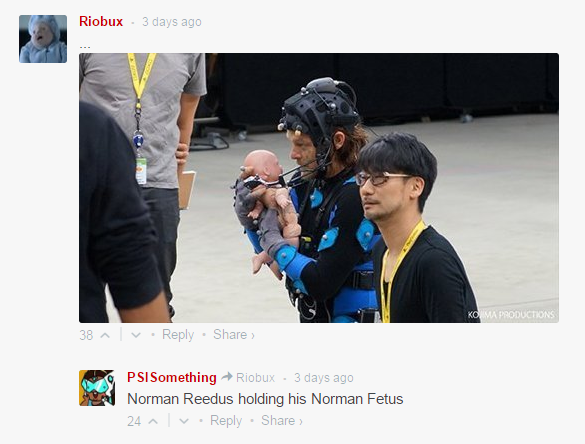 Dreamweaver: Does he name his dangly bits Norman Peetus?

Dreamweaver: “their shift at Wendy’s ends in like 10 minutes so I’ll just wait it out.”

Sounds like the beginning to all my dates with a hooker named Wendy.

From E3 political activist has a point 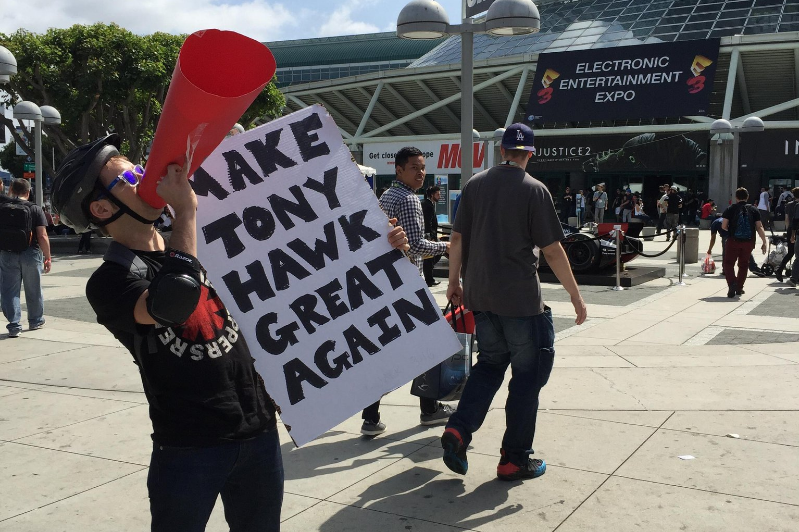 Dreamweaver: When the crackhead agrees with you, you’re probably doing something right.

Dreamweaver: He’s not talking about the band either. 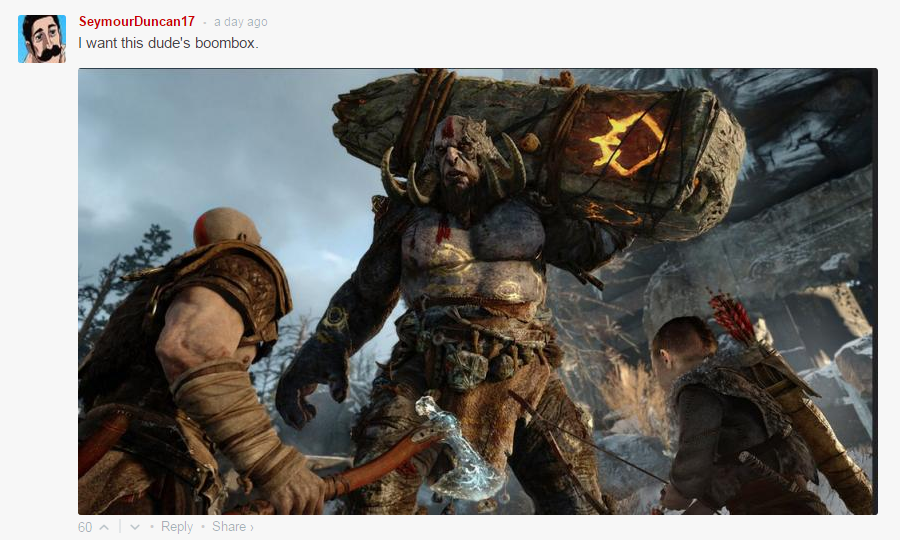 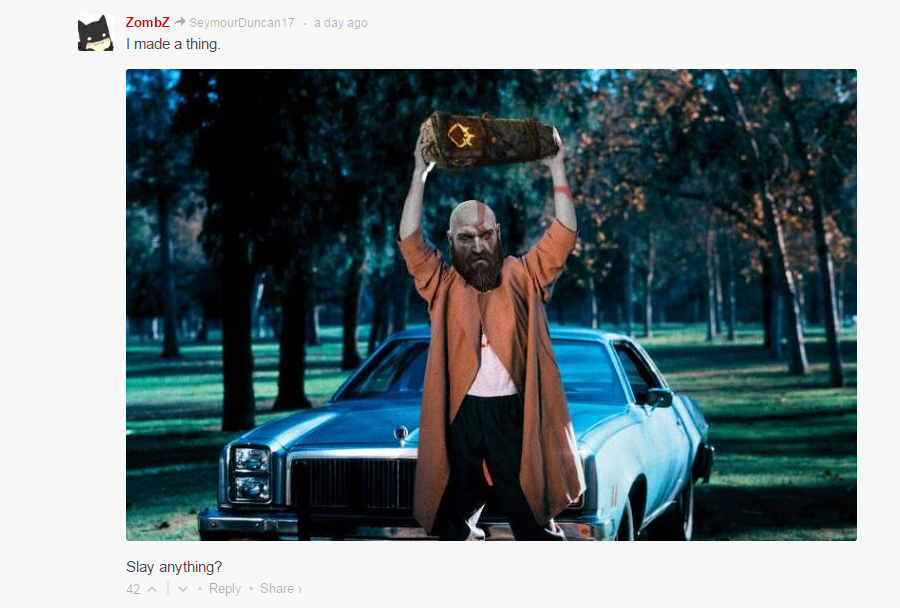 Clearly, you are not. 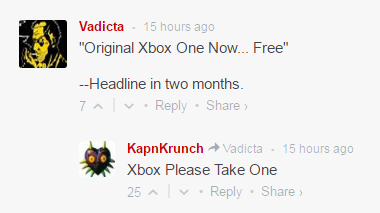 From Ha, ThinkGeek is doing a Proto Man Buster replica too

From Kingdom Hearts feels right at home on Unreal 4

From Final Fantasy XV has won me over

Dreamweaver: If only we could be so lucky to find that special someone that makes everything feel baller.

Dreamweaver: Damn it, they always cut if off at the good part.

From Well, at least I know the boy doesn’t die in The Last Guardian

Dreamweaver: I can honestly say exactly three people will see this coming.

From Bungie slept with wolves for Destiny

Dreamweaver: He makes the bitches howl. 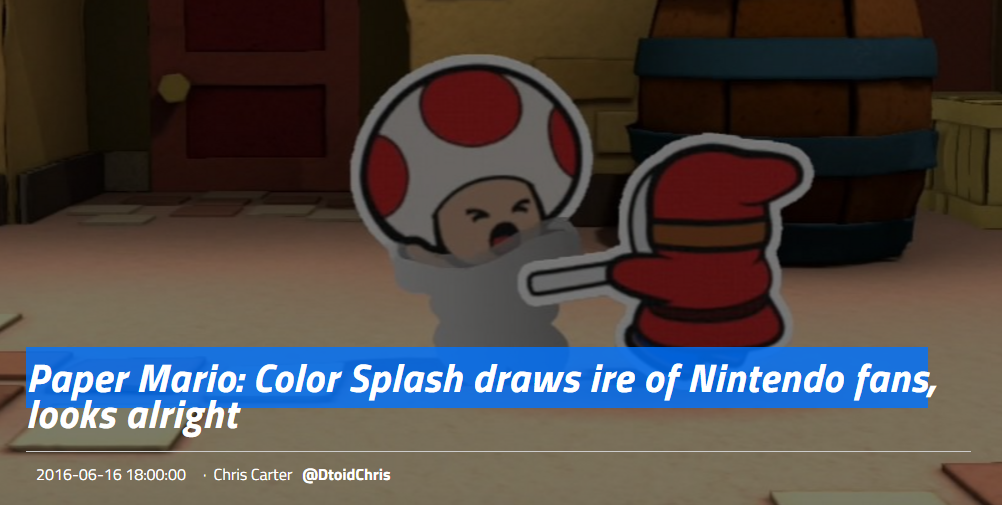 Dreamweaver: He knows what he did.

From Atlus is localizing Persona-like Caligula 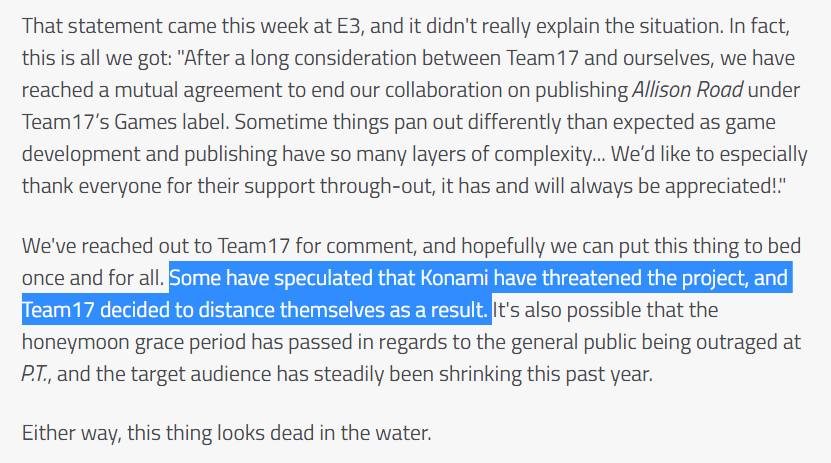 Dreamweaver: If I wanted balls thrown at me, I’d go to a drag show in Vegas.

And that’s it for this edition! As always, be sure to comment down below which comments did you enjoy the most, or if there’s any comments you saw that you would’ve featured that I didn’t! You could also upvote it, but that’s just lazy, man.

Filed under... #comments of the week#Community#Notable#Promoted stories